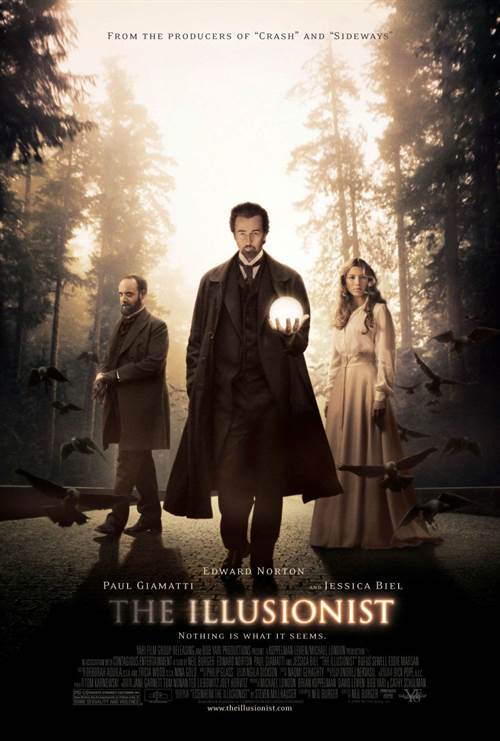 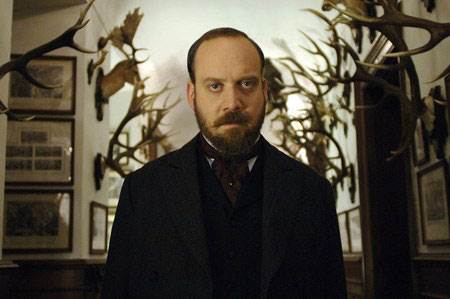 A supernatural mystery that combines romance, politics and magic, "The Illusionist" is the latest film from the producers of the Oscar winners "Crash" and "Sideways." The film stars Academy Award nominees Edward Norton and Paul Giamatti as two men pitted against each other in a battle of wits: Norton as mysterious stage magician Eisenheim, and Giamatti as Vienna"s shrewd Chief Inspector Uhl, with Jessica Biel sharing the screen as the beautiful Sophie von Teschen.

Stream The Illusionist in Digital HD/4K from the AppleTV store.

Listen to the The Illusionist soundtrack on Apple Music.

The Illusionist images are © Yari Film Group. All Rights Reserved. 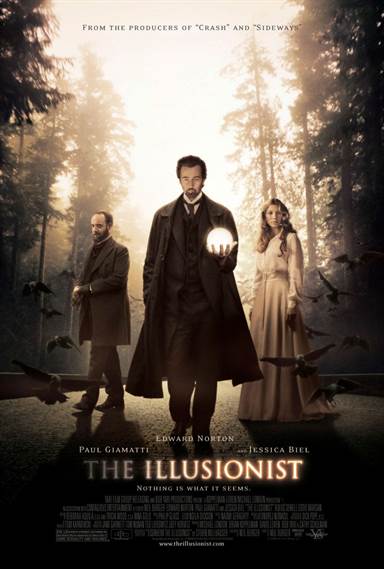 The 2006 movie came out around the same time as The Prestige and involved another stage magician in a period-piece romance. This time we're in Vienna at the turn of the century where Ed Norton as an absolutely smoldering "Eisenheim," a famous magician vies with the crown prince Leopold for the love of a beautiful woman (Jessica Biel). Having a famous, mysterious stage magician after your fiancee at the best of times would be disturbing--when you are a potentially murderous heir to the throne there's room for serious intrigue.

Leopold's cats-paw comes in the form of his chief inspector Uhl played with signature charisma, intensity, and just a little vulnerability by Paul Giamatti. The magician has his own designs, the crown prince wants him figured out--and then disposed of one way or the other, and inspector Ulh has to see if he can stay one step ahead or, failing that, at least a couple steps behind the famous prestidigitator.

I am entranced by the worlds of con men and magicians (and the two are, I think, very similar). I love the way their movies usually try to play us, the audience. Some times they play fair and sometimes they don't. Usually there's a little of both. In The Prestige it played it straight until the end--in The Illusionist it's far less clear. It's not clear to me how much of the magic was CGI--but clearly some of it--maybe a lot of it--was.

There are tricks he does that we, today, would have a very hard time doing as he does them--and some I doubt we could do at all. Can Eisenheim recall spirits of the dead? Did he smuggle an electromagnet into the floor of the palace? What's believable and what isn't? We don't know. True, real magicians did serve as advisers and although Norton had a "hand stand in" for some of the tricks he also received extensive training--but at the end of the day, the "magic" in The Illusionist felt more fake to me than the cosmic events of The Prestige.

I believe, for example, the Orange Tree trick is possible--but I suspect what the camera showed us was CGI. We, the audience, in these movies need to see exactly what the real people would see--or else the movie is kind of cheating.

But beyond that, how was it? It's lush. The sets ooze character. Leopold's dining room drips power and authority--the photography moves from a little darkly over-indulgent in the flash-backs to just right on the busy turn-of-the-century streets. Norton is, as always, excellent. Here both a cipher and a real person: the person he's playing is private and mysterious but no less full of passion than anyone else and he manages both these things making it look easy.

I figured out part of the secrets but some of the others surprised me. The movie doesn't degrade into maudlin false-dawns and boy-loses girl that most love-stories do by formula: it fills those gaps with intrigue and special effects! This, needless to say, is a superior formula even if it's not necessarily always fairly done.

On the whole, The Illusionist is a solid entry in the stage-magician movie category even if it doesn't magic itself to the top.