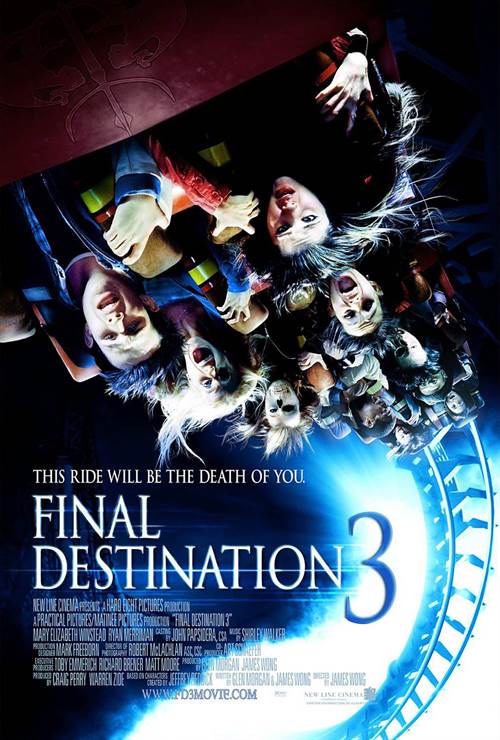 On what should be one of the happiest days of her life, high school senior Wendy Mary Elizabeth Winstead) joins her friends for a graduation night celebration at a local amusement park. As they’re about to board a roller coaster, Wendy is suddenly spooked. Her boyfriend Jason (Jesse Moss) reassures her that it’s merely the act of relinquishing control that’s giving her the jitters. Wendy overcomes her fear, but no sooner has the pneumatic harness descended, securing her in her seat, than Wendy experiences a vivid premonition of a fatal accident in which the roller coaster becomes a death trap for her and her friends.

Emerging from her terrifying vision and still on the ride platform, Wendy freaks out and demands to be let off. Her classmate, Kevin (Ryan Merriman), who’s seated beside her, feels compelled to accompany Wendy. As they’re leaving, Lewis (Texas Battle) taunts Kevin, calling him a wimp. Insults turn to blows, others join the scuffle, and soon a handful of students are forcibly ejected from the ride. As they watch from below, Wendy’s premonition proves nightmarishly true - the coaster careens out of control, and all those aboard perish.

But that’s only the beginning...

Those who survive the disaster discover that fate is hard to escape. They were meant to die ... and death is not so easily cheated!

It’s not long before death comes to claim its next victim, and it’s through this tragedy that Wendy realizes there are clues to the survivors’ impending demise contained in photos she took at the amusement park that fateful night. As Wendy and Kevin desperately try to interpret the clues that might save lives, one-by-one their friends meet fantastically gruesome ends ... and soon it will be their turn.