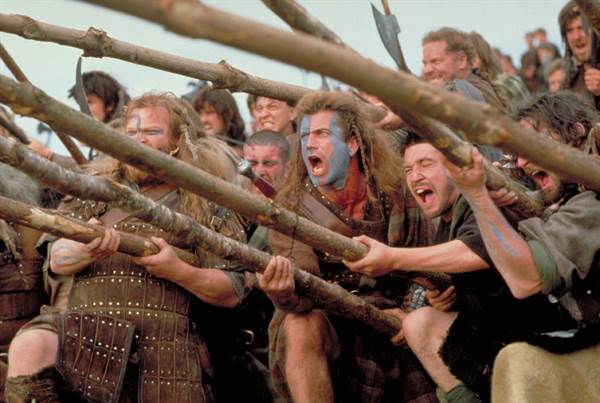 William Wallace is a Scottish rebel who leads an uprising against the cruel English ruler Edward the Longshanks, who wishes to inherit the crown of Scotland for himself. When he was a young boy, William Wallace's father and brother, along with many others, lost their lives trying to free Scotland. Once he loses another of his loved ones, William Wallace begins his long quest to make Scotland free once and for all, along with the assistance of Robert the Bruce.

Download Braveheart in Digital HD/4K from the iTunes store.

Listen to the Braveheart soundtrack on Apple Music. 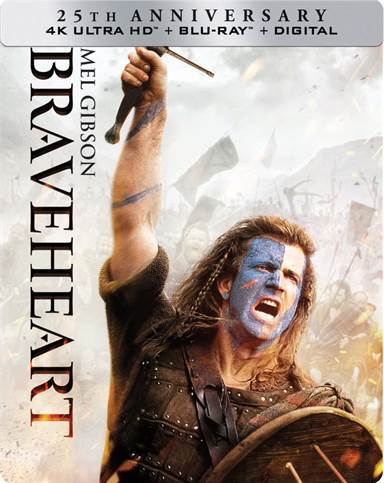 FFFRREEEEDDDOOOOMMMMM!!!!!!!  That one word in an iconic scene made Braveheart a memorable movie.  Released in 1995, the film earned director and star Mel Gibson (the Lethal Weapon series) two academy awards.  The story is based on fictionalized tales of William Wallis, a Scottish patriot, and leader who defended his country against the tyranny brought forth by the King of England, Edward "Longshanks".  While previously released on 4K Blu-ray, Paramount Pictures has decided to team up with Best Buy to sell a 25th-anniversary special edition 4K SteelBook of the film.  Braveheart, along with another iconic film, Gladiator, are two special editions that fans will want to go out and get (or order online during Covid-19 quarantine).

William Wallis (Gibson) lived in Scotland in 1290.  Years earlier, as a child, he witnessed the deaths of several Scottish noblemen who were lured by the promises of King Edward of England.  The King then made the people Scotland his subjects and ruled over them from afar.  When William's father and older brother left to avenge the deaths of the other nobles, he didn't realize it would be the last time he would see them alive.  William was then taken in by his Uncle, who traveled with William throughout Europe where he was well educated.

As an adult, he returned home to Scotland and found the young girl he remembered had become a grown woman.  They secretly married so he wouldn't have to "share" her with an English Nobleman but when their secret was found out, she was killed.  With nothing to lose, Wallis declared war against King Edward and united the Scottish clans to rise up against the oppression they had long faced under the King.  Unfortunately, after several winning battles, Wallis was betrayed and captured.  He was then tortured but refused to relent and eventually was disemboweled in public until he passed away.  His death caused him to become a Martyr for Scotland and his story (or some variation of it) has lived on for centuries.

Interestingly, Gibson won the Oscar for best director and best picture for this film but wasn't even nominated in the best actor category.  He gave a rousing speech to electrify the clans before the battle and, of course, there was the torture scene I mentioned earlier.  However, his Scottish brogue was hit or miss, and it didn't always seem that he was completely invested in the scene (perhaps producing, acting, AND directing pulled him in too many different directions all at the same time).  Sophie Marceau (The World is Not Enough) steals every scene she is in as English Princess Isabelle and Brendan Gleeson (In Bruges) is the perfect "sidekick" to Gibson's Wallis, though sometimes his accent is so thick it's difficult to understand what he is saying.  Catherine McCormack (28 Weeks Later), as Wallis' wife Murron, is excellent for the brief time she is on screen.

The 4K transfer offers some wonderful video moments, especially the mountainous landscape, as well as the deep forest of Scotland.  The details in the costumes have never been sharper.  The Dolby Atmos audio is an excellent complement to the video quality and enhances James Horner's (Titanic) wonderful score.  The extras (besides the steelbook casing) are previously released and include: Director's Commentary, BRAVEHEART Timelines, Battlefields of the Scottish Rebellion, BRAVEHEART: A Look Back, Smithfield: Medieval Killing Fields, Tales of William Wallace, and A Writer's Journey.  Give yourself ample time to watch the extras as, like the film itself, they are long but interesting.

I'm not exactly sure what Gibson's predilection towards directing long movies could be but at just under three hours running time, Braveheart is his longest film to date.  Unfortunately, it doesn't need to be that long to tell the same story.  Interestingly though, supposedly the movie was originally four hours long but was cut down to three.  While Gibson has a talent for directing compelling stories, he could use some assistance in the editing room.  Also, Braveheart is almost completely fictionalized other than the fact that the main character is named William Wallis.  It has been dubbed one of the most historically inaccurate movies of all time so feel free to enjoy the story and the drama but don't mistake it for historical truth.

The movie is beautifully shot, well-acted, and offers an interesting, but an untruthful, story about what many believe to be a great Scotsman.