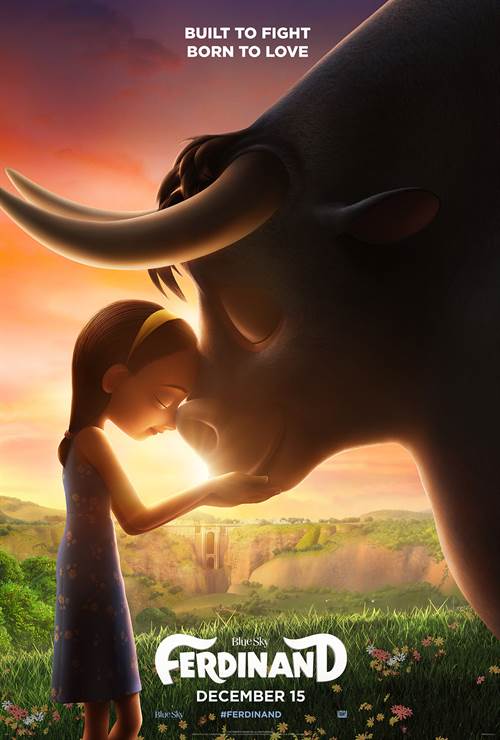 FERDINAND tells the story of a giant bull with a big heart. After being mistaken for a dangerous beast, he is captured and torn from his home. Determined to return to his family, he rallies a misfit team on the ultimate adventure. Set in Spain, Ferdinand proves you can't judge a bull by its cover.

From Blue Sky Studios and Carlos Saldanha, the director of "Rio" and inspired by the beloved book "The Story of Ferdinand" by Munro Leaf and Robert Lawson, "Ferdinand" is a heartwarming animated comedy adventure with an all-star cast that includes John Cena, Kate McKinnon, Gina Rodriguez, Anthony Anderson and many more.

Stream Ferdinand in Digital HD/4K from the AppleTV store. 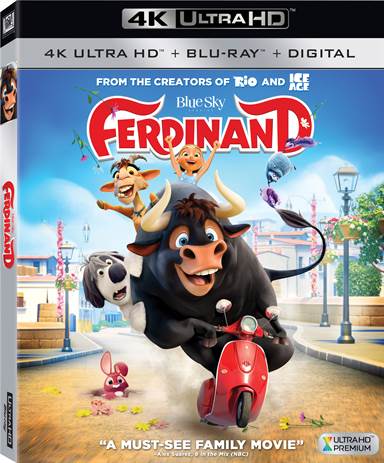 Stereotypically bulls are seen as strong creatures that are angry and aggressive.  In Hispanic cultures, they are used for sport and bullfighting and, as the bull, being chosen to "fight" the Matador is considered an honor.  From the time they are born these bulls are groomed to be fighters in the ring.  But what if they aren't meant to be a mean bull but a gentler one? What if they would rather live amongst the flowers enjoying the aroma and the beauty of the flora?  What if one bull could change the perception of millions? Blue Sky's animated feature, Ferdinand, attempts to do just that.  Out now on 4k, Blu-ray, DVD and Digital HD, it is a cute tale of one big bull!

Ferdinand (John Cena; Trainwreck/newcomer Colin H. Murphy as young Ferdinand) is a young calf living at Casa De Toro ranch.  Unlike most of the bulls/calves there, he isn't interested in becoming a bull in the ring facing down a matador.  He would rather grow flowers and enjoy nature.  This attitude, of course, makes him the butt of jokes from the others.  Then one day Ferdinand's father gets chosen and promises to return a hero but when that doesn't happen young Ferdinand runs away from the Casa.

He is found by a florist and his daughter, Nina (Lilly Day) and raised like a family pet.  Of course being with them he is as happy as can be until the day he is told he can't go to the flower festival anymore because he has grown too large.  Not wanting to miss out Ferdinand goes anyway and scares the townspeople.  He is then captured and brought ironically back to the Casa where he meets Lupe the calming sheep (Kate McKinnon; Ghostbusters).  With her help, he tries to escape again until he finds out that none of the bulls survive the ring and he decides to do something about it.  When he becomes the "chosen" bull he refuses to fight, changing the face of bullfighting forever.

The cast is solid though I kept thinking Cena sounded somewhat similar to Nathan Fillion, which was vaguely distracting.  The others are good and they deliver their lines expertly.  However, the real star and stand out of the film is K=McKinnon.  She is hilarious in general but manages to even make this script electric.  It's a shame she isn't in more of the movie.

The 4k Blu-ray is HEVC/ H.2.65 codec video quality with an aspect ratio of 2.39:1.  The picture is exceptional and the colors pop off the screen.  The flowers are especially vibrant which is one of the best parts of the film.  The Dolby Atmos audio is clean and crisp and the dialogue can be heard clearly.  The eclectic soundtrack sits nicely on the side channels.  The extras are found on the traditional Blu-ray in this combo pack and include: Ferdinand's Guide to Healthy Living with John Cena, A Goat's Guide to Life, Ferdinand's Team Supreme, Spain Through Ferdinand's Eyes, Confessions of a Bull Loving Horse, Creating the Land of Ferdinand, Anatomy of a Scene: The Bull Run, Learn to Dance with Ferdinand, Ferdinand's Do It Yourself Flower Garden, Home" Music Video, Creating a Remarka-Bull Song, Art of Ferdinand Gallery and Theatrical Trailer.  They are certainly worth watching at least once.

Ferdinand offers a timeless message of acceptance and inclusion while combining Hispanic culture and a lesson in bullfighting.  While there are about four or five laugh-out-loud moments the majority of the movie is simply ok if mildly entertaining and the ending leaves something to be desired.  It is a cute movie but not necessarily a stand out among animated features in 2017.