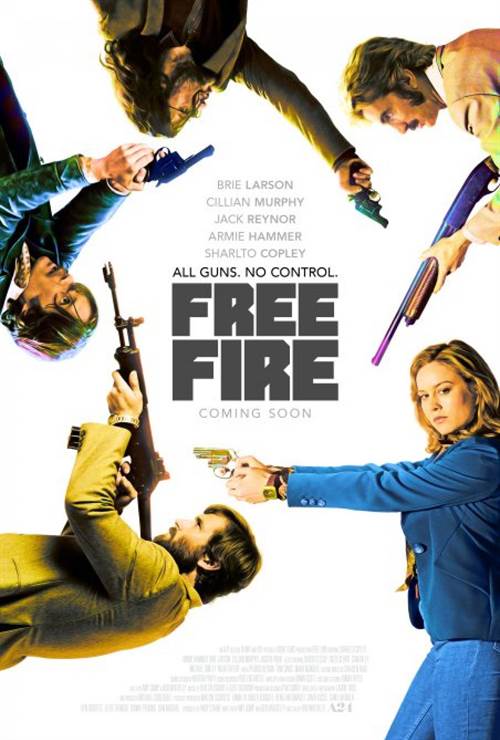 Set in a colorful yet gritty 1970s Boston, Free Fire opens with Justine (Oscar® winner Brie Larson), a mysterious American businesswoman, and her wise-cracking associate Ord (Armie Hammer) arranging a black-market weapons deal in a deserted warehouse between IRA arms buyer Chris (Cillian Murphy) and shifty South African gun runner Vernon (Sharlto Copley). What starts as a polite if uneasy exchange soon goes south when tensions escalate and shots are fired, quickly leading to a full-on Battle Royale where it’s every man (and woman) for themselves.

Stream Free Fire in Digital HD/4K from the AppleTV store.

Free Fire images are © A24. All Rights Reserved. 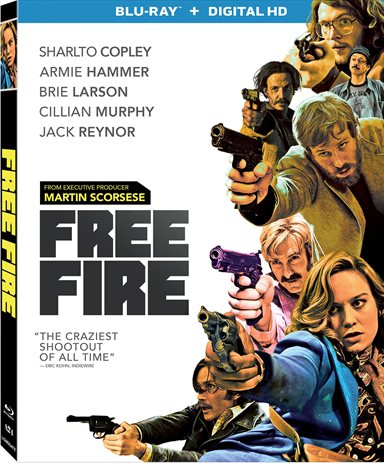 Lionsgate has a history of making captivating films and Free Fire is no different.  With Executive Producer, Martin Scorsese one may expect The Godfather, but it isn't.  However, with a different genre of a shootout film, Scorsese and the other producers who worked on this film, make it work.  Clearly, the Scorsese influence is felt, as the first meet up scene sure has the feeling of two mob families meeting up - hesitantly.

Set in 1978, Free Fire is about two gangs who meet each other in a deserted warehouse, to buy weapons.  Instead of merchandise and money changing hands for the weapons, the encounter ends up in a shoot out and a game of survival.  Director Ben Wheatley (Kill List) directed Free Form and wrote it along with Amy Jump  (Kill List), as they have collaborated on several projects in the past.  Between the direction and storyline itself, both the dialogue and the scenes flow.

Easter eggs flow freely in the beginning exchange between the gangs, signaling that something isn't going to go right with this deal- the first being that the driver of the van of one gang beats up one of the other gang members the night before, and the second when the selling gang hides the ammunition.  What is fantastic is that the deal doesn't go bad because of the guns or the ammunition, but over one of the gang member's cousin's reputation.

The gangs are rounded out by some of the following notable actors, all of whom have starred in blockbuster films:  Brie Larson (Kong: Skull Island); Enzo Cilenti (The Martian); Sam Riley (Maleficent); Michael Smiley (Rouge One); Cillian Murphy (Tron); and Armie Hammer (Cars 3).    Considering the actors had almost one location to maneuver in the entire film (the warehouse), they performed brilliantly.   Especially enlightening was the actual emotions exhibited- from being shot, to yelling at other shooters, to hiding behind objects, as well as the eye contact made with the other actors in the scenes.  I think Free Fire tested the actor's limits of their emotional range more than any other movie of which they may have previously been a part and provided a bit of light comedic entertainment here and there so as not to keep the storyline too serious.

The video was presented in 1080p High Definition, 16 x 9 widescreen presentation, with an aspect ratio of  2.39:1. Yellows and browns are highlighted, setting a scene for 1978.  The warehouse was on the dingy side but one wouldn't expect otherwise for a clandestine meeting of arms dealers.

The audio was clear thanks to the DTS-HD Master Audio 5.1 provided. Background noise was kept to a minimum and the shoot out scenes were authentic sounding, although I felt as if the shooting was quite loud in comparison to the way it should have sounded.  I did find that in the opening scenes, the dialogue was a little on the soft side, causing me to adjust the volume, but then the horn honking was extremely loud.  That being said, one volume adjustment in the beginning of the film does not detract from the exceptional quality of the sound provided.

There are two bonus features provided on the Blu-ray, presented in HD.  First, The Making of Free Fire provides some interesting details about how the movie was made.  The second and final bonus feature is always one of my favorites- Audio Commentary with Director Ben Wheatley.  It always pleases me when the director takes the time to record his thought process to basically invite people into his living room and bring us a deeper understanding of why the movie happens the way it does.  Audio commentary bonus features really show that they want the audience to understand the inner workings of the film and to make the effort for the studio to do so is worth every penny spent on the purchase of the Blu-ray disc.

While admittedly, I can't say that a shoot out movie is my favorite genre (I am clearly more of a Superhero and romance genre kind of girl) but watching the actors interact with eye contact in one location kept my attention.  In addition, the movie is about 90 minutes, which is long enough to provide a cohesive storyline without making the audience glance at their watch.  Free Fire is an entertaining light action flick to add to your collection.