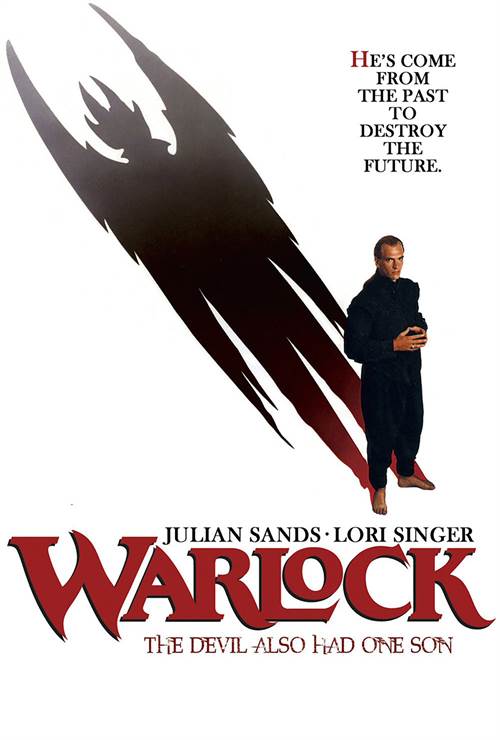 In 17th century Boston, a warlock (Julian Sands) escapes death and magically leaps 300 years into the future, where he searches in Los Angeles for the three parts of the Devil's Bible that will unmake the world. Meanwhile, the witch hunter (Richard E. Grant) who brought him to trial -- aided by one of the warlock's victims (Lori Singer) -- is in hot pursuit to stop his heartless path of violence and foil his destructive plans.

Download Warlock in Digital HD/4K from the iTunes store. 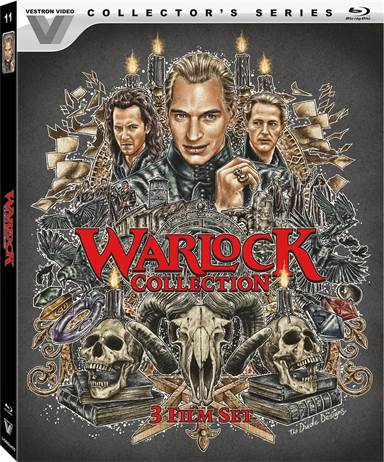 I don't know how many times I can say this but these Vestron Video releases are casting a spell on me. As a long-time genre fan, I could never get enough of anything horror related, even after the golden age of horror had begun to wane, and the 80's lurched into the early 90's and the horror scene had begun its slow decline, I was still compelled to the big screen to see my favorite denizens of darkness weave their nefarious plots or possess the bodies of the innocent, or even sharpen their favorite axes for use on unsuspecting camp counselors. Some of my most favorite movies involved witchcraft and the dreaded Black Arts. So, of course, when I saw the trailer for Warlock, and the gleefully evil Mr. Sands daring me to drag my friends to the theater, again, I couldn't say no.

The Warlock franchise was launched in the U.S. in January, '91 and it had a great, if unoriginal premise, a 17th century Warlock (Julian Sands) transports himself to the 20th century in order to cast the ultimate spell.  Chasing after him, through time, is the tenacious Witch Hunter, Giles Redfern (Richard E. Grant) who will stop at nothing to destroy The Warlock before he can utter the True Name of God and destroy all of creation. Of course, like most horror stories, the good guy wins in the end and Evil is stopped… Until the sequel, that is.

Warlock: The Armageddon sees The Warlock return to his nefarious form, this time, instead of reading from the Devil's Bible he is attempting to join six mystic stones in order to unleash Hell on earth. Unfortunately, this was where my experience with the Series ended and in fact, I had never seen the straight to video release of the third film, as was probably the case with most of you. Luckily, Vestron is about to remedy that with Part 3.

Warlock III: The End of Innocence, sans Julian Sands as the Warlock and instead, insert Bruce Payne as the titular baddie. The Warlock has his sights set on a college student, Kris Miller (Ashley Laurence of Hellraiser fame) whom, in a past life was supposed to be a sacrifice for the Warlock but was protected by the magic of her mother. Kris has the blood of a powerful Witch coursing through her veins and only she can stop the Warlock once and for all.

Not only are all three films included in this 2-disc set but they look and sound fantastic too. There's also a coven-full of extra features in here, enough to appeal to all the obsessive Warlock fans out there. My personal favorites include "Satan's Son" interview with Julian Sands, the "Effects of Evil" not to mention the Isolated score (I love this new feature on their last two releases and I wish more extras would include this). Not to mention the Director's commentaries, theatrical trailers, TV spots, stills gallery and much more.

If you are like me and you've been waiting since the 17th century for this, wait no more, Vestron drops this one on 7/25/17.  However, prepare to weave a spell on your wallet and fork over the $39.97. Although there's plenty of online options where you can get this at a discount, without having to utter the true name of God to do it.