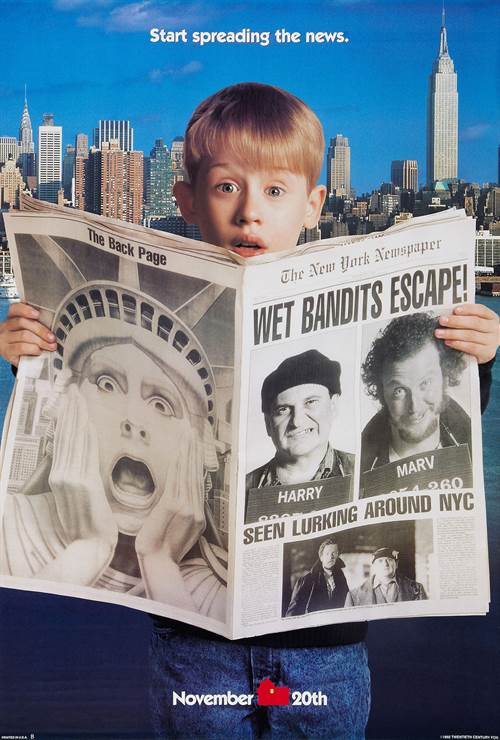 Great news – Kevin McCallister (Macaulay Culkin) is spending the holidays in New York City! Bad news – his parents are spending them in Florida! Separated once again from his family, Kevin manages to find food, lodging and fun using his dad’s credit card. But his big-spending solo act takes a dangerous turn when the Wet Bandits, Harry and Marv (Joe Pesci and Daniel Stern), escape prison and also land in the Big Apple. Now, Kevin must outrun and outprank them again in this high-flying adventure with twice the ingenuity, twice the kid power and twice the laughs as the original! 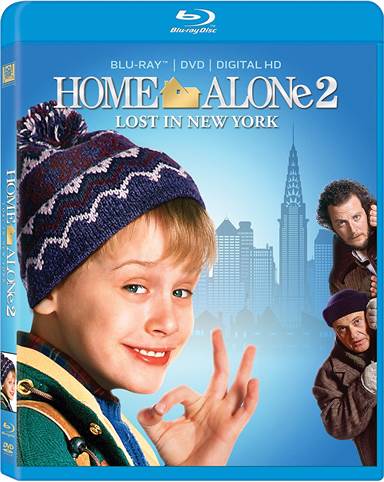 It's hard to believe that it was twenty-five years ago that Kate (Catherine O'Hara; Frankenweenie) and Peter (John Heard; Big) McCallister lost track of their son Kevin (Macaulay Culkin; My Girl) for the second time in two years as the family went on vacation.  I mean…really!?!  Who forgets their kid once, let alone two times in a row?  Well, lucky for us, they did because the sequel Home Alone 2: Lost in New York provided some great laughs for audiences to enjoy.  As the holidays approach, Fox home entertainment wants to remind you of those laughs (and not to forget your kids) with the release of the 25th Anniversary edition of the Blu-ray and DVD.

For the second year in a row, the McCallister family is taking a vacation for the holidays – this time to sunny Miami.  Of course, they oversleep and are rushing to the airport.  While they remember to bring Kevin with them this time they lose him in their haste to make their plane.  Thinking he is following his father, Kevin accidentally boards a flight to New York and finds himself alone again, with his dad's credit card and cash in the Big Apple.  He then proceeds to book himself into the plaza hotel and enjoy his own private vacation.

At the same time, "the wet boys", Harold (Joe Pesci; Goodfellas) and Marv (Daniel Stern; City Slickers) (now called "the sticky bandits" thanks to Marv's latest "invention") escape from prison to pull a heist on a toy store.  Once again, they end up having a run-in with Kevin who is there to foil their plot.  Meanwhile, the hotel concierge, Mr. Hector (Time Curry, The Rocky Horror Picture Show) is suspicious after he runs the credit card Kevin gave which turns out to be reported stolen.  In the end, Kevin's family flies to New York to find him and have a happy ending.

Culkin was a wonderful actor as a child and, to be honest, this film series wouldn't have been the same with a different actor in the role.  His slightly mischievous smile and maturity really make one believe that a young boy could be lost in New York all by himself and manage to pull it off.  Pesci and Stern make a great criminal duo and Curry was a perfect choice to play the distrustful hotel worker.  He has a sneer that is both charming and devious all at once.

While the plot is recycled from the first film, writer John Hughes (Planes, Trains & Automobiles) manages to make it entertaining enough to offer a few laughs, though I am not particularly a fan of slapstick comedy.  Director Chris Columbus (Mrs. Doubtfire) keeps the pace moving along so the viewer doesn't feel a sense of boredom and the setting is wonderful as New York City at Holiday time is rather magical.

The 1080p high definition video quality does not serve the release well in this instance as the picture is somewhat grainy and the color palette seems a little muted despite the fact that it is New York City at holiday time and Christmas lights and holiday bows abound throughout the film.  The DTS-HD Master audio 5.1 fairs a little better as a holiday-themed soundtrack permeates the surround sound speakers.  The Blu-ray combo pack offers no extras other than a Digital Download and theatrical trailers for Home Alone, Home Alone2: Lost in New York and Home Alone 3.

While not as good as the original, Home Alone 2: Lost in New York offers a little bit of holiday cheer and humor at this festive time.