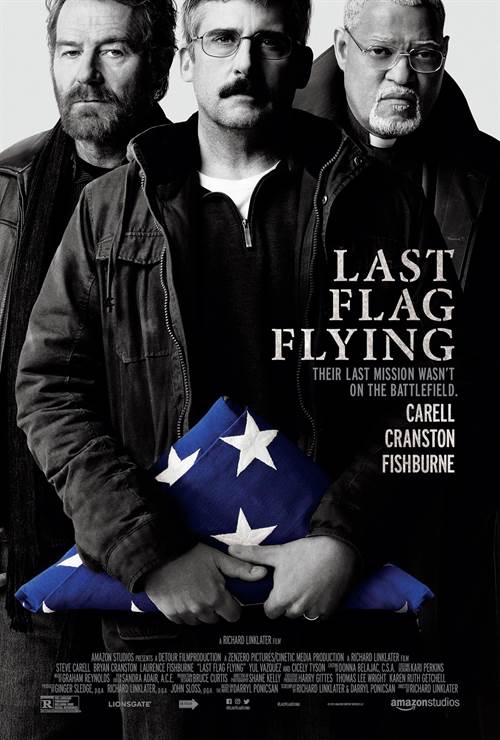 In 2003, 30 years after they served together in the Vietnam War, former Navy Corps medic Richard "Doc" Shepherd (Steve Carell) re-unites with Former Marines Sal (Bryan Cranston) and Richard Mueller (Laurence Fishburne) on a different type of mission: to bury Doc's son, a young Marine killed in the Iraq War. Doc decides to forgo a burial at Arlington Cemetery and, with the help of his old buddies, takes the casket on a bittersweet trip up the East Coast to his home in suburban New Hampshire. Along the way, Doc, Sal and Mueller reminisce and come to terms with shared memories of the war that continues to shape their lives. Director Richard Linklater and author Darryl Ponicsan collaborated on the screenplay which follows the trio as they wrestle with the pangs of war both past and present. 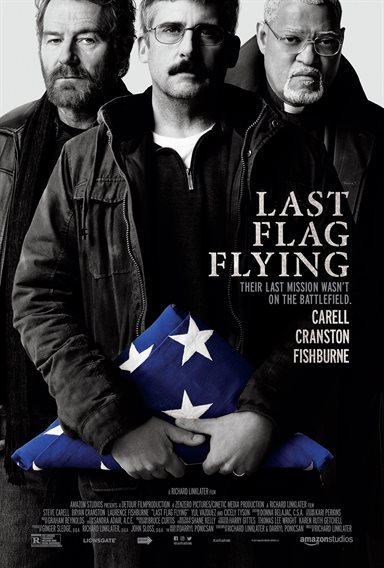 Take a terrific script, a heart-wrenching story peppered with some humor, three Academy Award-nominated actors and mix them all together. What you get is the recipe for a great film about an uncomfortable subject matter told in a sensitive manner.  Such is the tale of Director/writer Richard Linklater's (Before Sunset) new movie, Last Flag Flying.  With all the elements of a good film, the movie has drama, comedy and a theme that will resonate with people long after the movie ends.  It will also make you look at the military and our service men and women with a new set of eyes.

Larry "Doc" Shepard (Steve Carell; The Office) was a Navy Corpsman in Vietnam who was dismissed for bad conduct and spent two years in the Brig.  He worked with Marines Sal Nealon (Brian Cranston; Breaking Bad) and Richard "the Mulla" Mueller (Laurence Fishburne; The Matrix).  When Larry's son enlists and ends up dying in the Middle East, Larry seeks out his former buddies to ask for their help. What he finds is a Reverend and an alcoholic but with no one else to turn to he begs them to make the journey with him to Delaware to collect his son's remains.

As the details of his son's death fully emerge, Larry feels he cannot bury him in Arlington National Cemetery as originally planned but instead wants to transport him home to New Hampshire.  Reluctantly, Sal and Richard come along for the road trip and the three reminisce while fighting their own demons of what occurred on enemy soil three decades earlier.  In an effort to support their former buddy (who they owe a debt to), these men seem to reconcile with their past and heal their own souls.

Cranston and Fishburne are the perfect yin and yang playing the devil and the angel on Larry's shoulders respectively, though sometimes Cranston's character is a little over the top.  Carell plays Shepard very sheepishly and somewhat timid with only momentary glances of outward emotion.  I found myself becoming increasingly frustrated with Larry, as I wanted him to scream or rage or cry uncontrollably at the unfairness of it all.  Younger actor J. Quinton Johnson (Everybody Wants Some) portrays a marine who was Larry Jr.'s best friend in the Corp and manages to hold his own against these heavy hitting veterans.  His character is the right blend of Marine like stoicism mixed with a modicum of emotions.

The story is both heartbreaking and life-affirming all in one two-hour package.  It shows us how short life can be, how one's choices can impact our whole lives, how to find the humor in things and how to honor our fallen heroes with dignity.  It also teaches us not to live in the past.    The comedy is there to lighten the heaviness of the subject matter and for the most part, it seems to work but as you watch the film you are still very much acutely aware of the sorrow lurking beneath the surface.  As a parent, it can be difficult to watch, especially the ending.

While it may not seem appropriate to infuse the laughter in with the death of a soldier and son I felt it was necessary to keep the movie from becoming a cry-fest.  Don't get me wrong - I cried but I also felt moments of fun and appreciation for Nealon's attempt to lighten the mood.  Without those interludes, the film would have been a bogged down mess.

After sitting with it for a day, I still feel a weight about it.  It's a movie that stays with the viewer long after the credits roll.