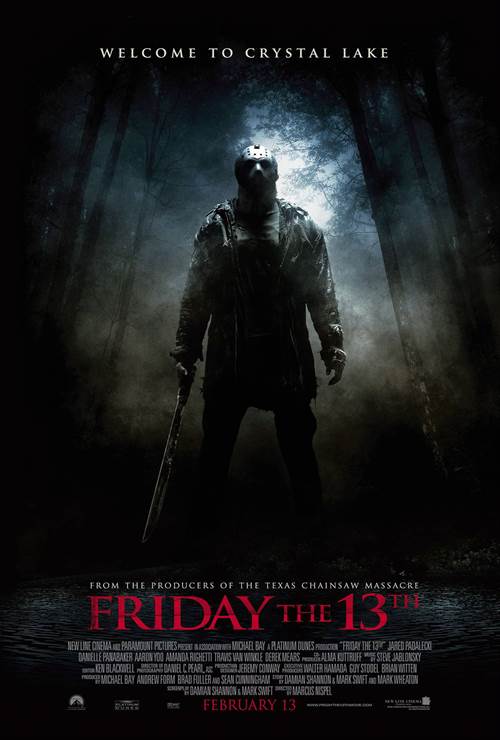 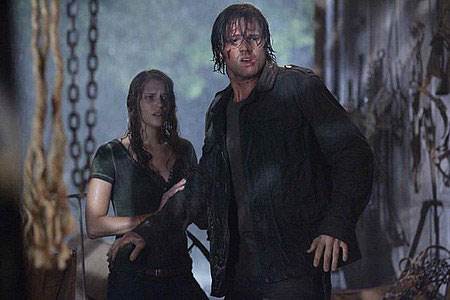 Against the advice of locals and the police, Clay (Jared Padalecki) scours the eerie woods surrounding Crystal Lake for his missing sister. But the rotting cabins of an abandoned summer camp are not the only things he finds. Hockey-masked killer Jason Voorhees lies in wait for a chance to use his razor-sharp machete on Clay and the group of college students who have come to the forest to party.

Stream Friday the 13th in Digital HD/4K from the AppleTV store.


Friday The 13th Sequel Canceled  4/23/2010 9:10 AM EST
Don't expect to see a follow up film to last year's remake of "Friday the 13th". Platinum Dunes producer Brad Fuller recently tweeted that the upcoming project "is dead - not happening". Fuller also told Bloody Disgusting that "right now there is no movement on Friday 13th: Part 2". The remake grossed a respectable $91 million and originally a sequel was expected to be released later this year, in...  More>> 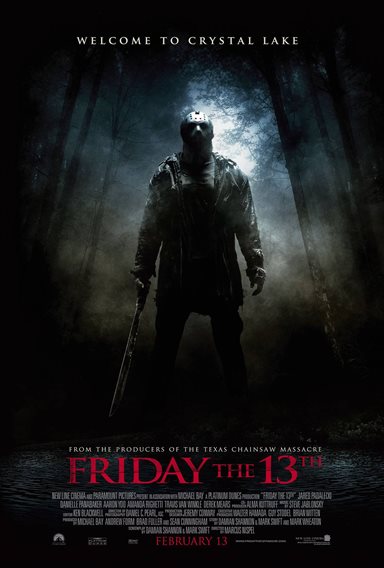 Jason Vorhees, in the hockey mask (which didn't come about until the 3rd movie) is one of the most recognizable characters in cinema.  He is the indestructible zombie serial killer who stalks teenagers out in the woods, right?  Well sort of... it turns out that Jason's, character arc (if we can call it that), has several curves in the road.  For one thing, he is not always a zombie.  According to cannon, until he was killed in Jason Lives, he was flesh, blood, and pretty spry.  For another thing, he didn't always wear the hockey mask -- that came in part III -- before that he wore a pillow case over his face.

Regardless, though, he has always been 100% killer and that never changes; although allegedly, one Jason actor refused to kill a dog claiming that Vorhees only vented his murderous wrath on people.  The people he kills are always young folks: teenagers or just out of teens -- and the girls are always good looking.  His mythology gives him a reason for killing: vengeance for the death of his mother followed by simply protecting his turf, Crystal Lake -- where a summer camp once resided.  It has also been suggested that hormones act as smelling salts to him and raise his ire.

Whatever the case, the latest installment opens with a 23-minute scene that comes before the title; it is one of the longest openings in movie history.  During the scene  a team of pesky kids stumble across Camp Crystal Lake.  Although one of them knows the story, and, indeed tells it around the camp fire, they do not hightale it out of there ... with predictable results.

When the movie begins, another group of kids are going for a weekend at the lake house; and a solo young man is looking for his sister.  The sister had vanished there a little while ago.  We see a lot of iconic characters: the rich-kid jerk whose family owns the house.  There is an Asian guy doing comedy and his black friend (who is thankfully not the first to die) who is thinking of opening a music label (and gets that it's stereotypical - that it's rap). There is the stoner-looking guy, and there are the girls.  All of them, except for one -- the archetypical "good girl", are shallow, sexy, and uninhibited.

The plot of Friday the 13th requires that it separate the characters at first, kills off those who leave the group, and then try to wind up tension for a finale.  The primary tool of the trade for this is the close-in shot which allows the antagonist to appear suddenly for a 'boo' moment.  Alternatively, the director can go for a 'reveal' appearance where the killer is suddenly, and shockingly seen behind the soon-to-be victim.  The characters have no real chance against him and never really mount an intelligent defense.

In the modern version of the movie, Jason is active and quick--running and moving quickly as he did in the original films; he does not do the slow-motion killer walk.  He dispatches people with his machete and also an axe, and in one scene (kind of disappointingly) a bow and arrow.  Most innovatively he binds one camper in a sleeping bag and roasts her over a fire (aren't they supposed to be fireproof today?).  The killings are moderately graphic -- but quick and to the ... um ... let's just say the characters are dispatched rapidly.

Was there anything surprising in there?  Anything interesting?  Sort of...Jason exhibits a piece of un-Jason like behavior (no, it's not compassion) in a way I can't go into without possibly spoiling, but it did not "make the movie."  Clay (Jared Padalecki), the hero, who is looking for his sister (from the opening) is reasonably cast as the "hero".   He does a decent job, even if he does get some "script immunity" when he encounters Jason the first time.  Whitney (Amanda Righetti) as the "final girl" gets to face off (a little) with Jason in a way that is pretty stereotypical.

My problem with Friday the 13th (2009) is that although it makes a point of featuring a GPS unit in the beginning and having the characters say they have got no cell reception (of course there is no cell reception out at Crystal Lake), it isn't really at all "updated".   Scream was a far smarter, far more modern (well, I guess:  post-modern) movie in the same genre.  In trying to revive the 80's version of the franchise the creators intentionally didn't learn anything from the earlier films. That does make it a pretty stark piece of slasher cinema, but it also makes it a bit dull.

Which isn't a good thing for a movie about sharp pointy things.