Ridley Scot, Harrison Ford, and Blade Runner fans alike will thoroughly enjoy this latest version of the 4k UHD Blu-ray experience even if you own previously released ones.  A must have for the ultimate Blade Runner fan and a good reminder as we gear up for Blade Runner 2049’s theatrical release. 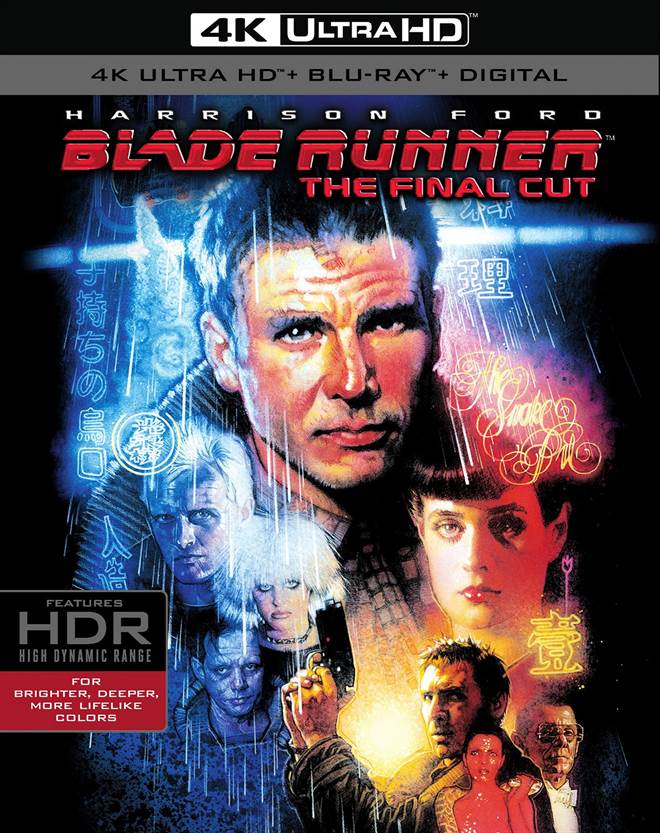 Purchase   DVD/Blu-ray/4K UHD
In 1982, Harrison Ford was running high on the successes of Star Wars and Raiders of the Lost Ark when he decided to star in Ridley Scott's (The Martian) movie Blade Runner.  While not initially a box office success, it became a cult classic with legions of loyal followers worldwide.  With the technological advancements and in anticipation of Blade Runner 2049 coming to theaters in October, Warner Bros. is releasing the original film on 4K Blu-ray which I'm sure will sell out fast based on the movie's fan base.

Rick Deckard (Ford) is a Blade Runner.  Basically, that means he hunts Replicants – machines that were made to look human but who are dangerous and have been banished "off planet". Now retired, Deckard is called back in when 4 Replicants steal a ship and return to earth.  He is basically told to (not asked) to find them and "retire" (a.k.a kill) them.  In his quest to discover where they are hiding he goes to their creator, Dr. Tyrell (Joe Turkel; The Shining), and meets another of his Replicants, Rachael (Sean Young; Stripes), who wasn't aware she was even one of "them".

So Deckard goes on a "quest" while battling his feelings for one of the very things he is supposed to kill.  He struggles with the idea of loving her knowing that if he doesn't kill her then there will be another blade runner who will.  He follows the leads and manages to kill two of the Replicants while the other two remain at large.  He finally tracks them down but not before they can kill two of the people who created them.  You see, these Replicants were designed to only have a short life span and they came to find Dr. Tyrell in order to give them more time.  However, when he reveals that all prior attempts have failed, Roy Batty (Rutger Hauer; Sin City) gets angry and kills the doctor.  When Deckard finally finds Batty he tries to kill Deckard before he himself dies.

Scott, as a director, can be hit or miss.  When he has a hit, it is a big hit but he doesn't always connect with the audience leaving his stylized films to fall flat.  Hits like Alien, Thelma and Louise, and Black Hawk Down show what a masterful filmmaker he is, while misses like Robin Hood and The Counsellor epically fail.  His aesthetic, though, is always intriguing and Blade Runner is a perfect example of that. The "film Noir" style may be too avant-garde for some but it results in some stunning visuals and the dingy looking pictures fit the gritty, grimy, dirty feeling of the city.

Ford is solid as Deckard and, given the theory that he too may actually be a Replicant himself, the slightly unemotional nature of his performance sits nicely in the Film.  Also, his aggressive behavior with Rachael and his odd dreams and questioning of photos and memories add fuel to that interesting theory.  We'll have to wait for October if there is further development on that possible story line or if it is debunked with the new film. Hauer has played everything from a leading man in a romantic film to the sidekick to the evil villain, as he does in this case.  In any of these roles, he is always strong and he is especially menacing as Batty.  Young is good as the emotional robot who finally learns the truth and Daryl Hannah (Splash) has a few strong moments as another of the Replicants.

The story is unique and intriguing but the execution misses the mark at times.  The nature of the Film Noir style lends itself to a slower paced movie that doesn't work as well when the film had a number of action sequences.  Hence the movie feels a little slow paced at times.  Also, while the musical soundtrack has been praised, there were times I felt as if I was on a futuristic ride at Disney World or Epcot (Spaceship Earth comes to mind).

The 4K Blu-ray offers the Final cut of the film along with an intro from Scott and a few other extras.  The 2160p High Definition video quality is really exceptional as the picture is clear and sharp. The Dolby Atmos audio is also fantastic with sound effects coming at you from all different directions making for a truly immersive viewing experience.  Combo pack has 5 discs with different versions of the film, audio commentaries, and some interesting extras.

Ridley Scot, Harrison Ford, and Blade Runner fans alike will thoroughly enjoy this latest version of the 4k UHD Blu-ray experience even if you own previously released ones.  A must have for the ultimate Blade Runner fan and a good reminder as we gear up for Blade Runner 2049's theatrical release.

Download Blade Runner in Digital HD/4K from the iTunes store.

Listen to the Blade Runner soundtrack on Apple Music.

For more information about Blade Runner visit the FlickDirect Movie Database. This release has been provided to FlickDirect for review purposes. For more reviews by Allison Rose please click here.