From the musical score to ambient noises, to dialog, to heart-pounding action sequences, all channels are optimized and the listener is fully immersed in the experience. 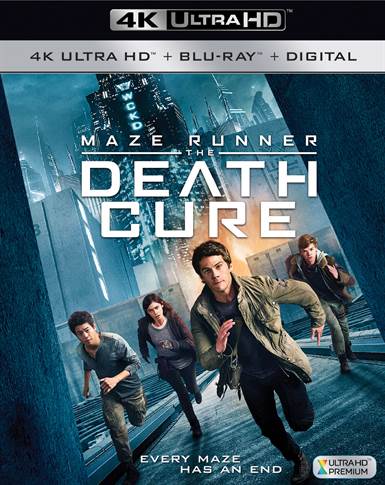 Purchase   DVD/Blu-ray/4K UHD
The Maze Runner franchise follows the story of young boys who find themselves trapped in a prison-like enclosure, held by an organization known as W.C.K.D. Some have tried to escape through a connected maze but none make it out alive. The boys must find a way to escape and figure out why they were taken and who the W.C.K.D. really is.

Fast forward to Maze Runner: The Death Cure, the third film in the franchise following The Maze Runner and Maze Runner: The Scorch Trials, where we find Thomas and the rest of the Gladers on a mission to finally discover the answers to all of their questions.  As we navigate through the film, we learn that those that survived the maze are the ones that hold the key to the cure for the global pandemic that is occurring.

As is the case with some franchises, by the time the third film comes out the plot and film, in general, seem to fall flat. The film wasn't bad by any stretch but some plot holes here and there tend to leave you a bit disappointed. That is unless you are a Mad Max fan. The sequence is an action-packed but purely derivative take on George Miller's 1981 post-apocalyptic masterpiece, The Road Warrior. Perhaps it was an homage, utilizing armored vehicles, flying across the barren wastelands, but it had an unfortunate, been-there-done-that quality, and left me longing for Max Rockatansky, and his Interceptor to save the day. And that Deja-vu feeling seemed to follow me throughout the rest of the movie, easily confusing the plots with The Hunger Games and many other young adult themed stories.

What will not leave you flat are the visuals. Maze Runner: The Death Cure, is released courtesy of 20th Century Fox Home Entertainment, and is presented on 4K UHD with a 2160p transfer in 2.39:1. The details in this release are extremely well done, with an amazing depth of field, as well as vividness of colors from the exterior shots to the shadowy, interior scenes, this movie looks amazing. From true fans of the series to the casual viewer, none of you will be disappointed.

The audio is no slouch either, with a 4K UHD's Dolby Atmos upgrade from the DTS-HD Master Audio 7.1. From the musical score to ambient noises, to dialog, to heart-pounding action sequences, all channels are optimized and the listener is fully immersed in the experience.

The Special Features are typical fare, most fans will enjoy the Gag Reel, as well as the 4 Featurettes, "The Final Run", "Dystopia", "Allies Reunited", "A Look Back", "Going Out on Top" were all fun to watch. All in all, there is little in the special Features set to get excited about.

The Maze Runner: The Death Cure, is a gorgeous looking if overwrought, conclusion to the popular trilogy. Its view of a dystopian, post-apocalyptic nightmare, where the children are our only hope for salvation from the deadly Flare virus, is fully realized. Yet, in the end, I just wish those kids had the power to make me care about their salvation.

Purchase a DVD/Blu-ray/4K UHD physical copy of The Maze Runner: The Death Cure today at Amazon.com

For more information about The Maze Runner: The Death Cure visit the FlickDirect Movie Database. This release has been provided to FlickDirect for review purposes. For more reviews by Leonard Buccellato please click here.