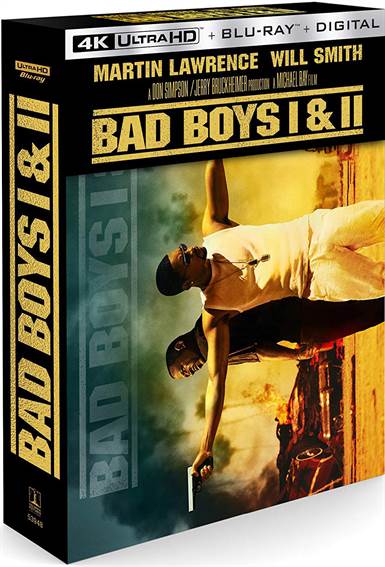 Purchase   DVD/Blu-ray/4K UHD
Bad Boys, Bad Boys, whatcha gonna do? Whatcha gonna do when they come for you? …Now you have the song stuck in your head too just like I do since watching both Bad Boys and Bad Boys II on 4K.  The Michael Bay (Transformers) directed films were a hit when they came out in 1995 and 2003 respectively and there have been rumors since then that a third installment is in the works for 2020. For now, fans will have to be content to rewatch the first two in the latest technology - 4K UHD Blu-ray.

Bad Boys teamed Mike Lowry (Will Smith; Men in Black) and Marcus Burnett (Martin Lawrence; Martin) as Miami Police detectives who are part of the Narcotics team.  As partners they banter and fight like a married couple, which adds a little bit of comedy to these otherwise action films, they solve crimes related to the drug trade in South Florida.

In Bad Boys, Lowery and Burnett landed the biggest drop bust of their lives only to have the heroin stole from the police station vault in what seems to have been an inside job.  As they investigate the theft, one of Lowery's friend's is murdered and her best friend, Julie (Tea Leoni; Jurassic Park III) is the only witness that Burnett and Lowery need to protect. Meanwhile, they have to find theist heroin before the theft is leaked to the press and a public relations nightmare ensues.

Bad Boys II sees the duo once again following the drugs but this time it's even more complicated as Burnett's little sister, Syd (Gabrielle Union; Bring It On), working undercover for the DEA trying to bring down Cuban Drug Lord Johnny Tapia (Jordi Molla; Blow).  As Lowery and Burnett follow the money Syd is laundering for Tapia they put her life in danger and eventually have to follow Tapia to Cuba to save her life.  Meanwhile, both men are evaluating their partnership as Burnett reveals he has requested a transfer.

Smith and Lawrence are a good team so it's no surprise they pair up for a second film and possibly a third in the future.  Their banter is cute and well-timed and makes for some fun in these movies.  Touted as the replacement to the Lethal Weapon franchise, these films, unfortunately, don't quite measure up but they certainly have their moments.

As Bay's first full-length feature film, Bad Boys offers an inkling of the filmmaker he was destined to become.  Unusual angles, elongated chase scenes, and massive explosions are evident throughout.  These scenes are the staples of the trademarks in Bay's future movies.  However, a standout moment comes in Bad Boys II when Bay gives a 360, full circle view of a shootout between Lowery and the bad guys.

The 4K Blu-rays are some of the best quality videos out today.  The picture for both films are sharp and clean and details can be seen clearly throughout.  This is especially nice when watching the establishing shots of the beautiful Miami landscape.  The Dolby Atmos audio only serves to enhance the video and is an excellent compliment.  It accentuates the driving soundtrack of both movies and offers the audience a fully immersive experience especially during the explosions.  The packaging is the only new "extra" as all of the others are ported over from the previous Blu-ray releases.

If you are a Michael Bay or Will Smith or Martin Lawrence or any combination thereof then you will want to own the double pack of these two films on 4K.  While the stories aren't unique, Bay's interesting directing style and the exceptional quality of this 4K UHD Blu-ray set make these movies worth owning.

For more information about Bad Boys visit the FlickDirect Movie Database. This release has been provided to FlickDirect for review purposes. For more reviews by Allison Rose please click here.