Lord of War, is a surprising morality tale of Evil vs. Evil where good seems to have been pushed to the side. 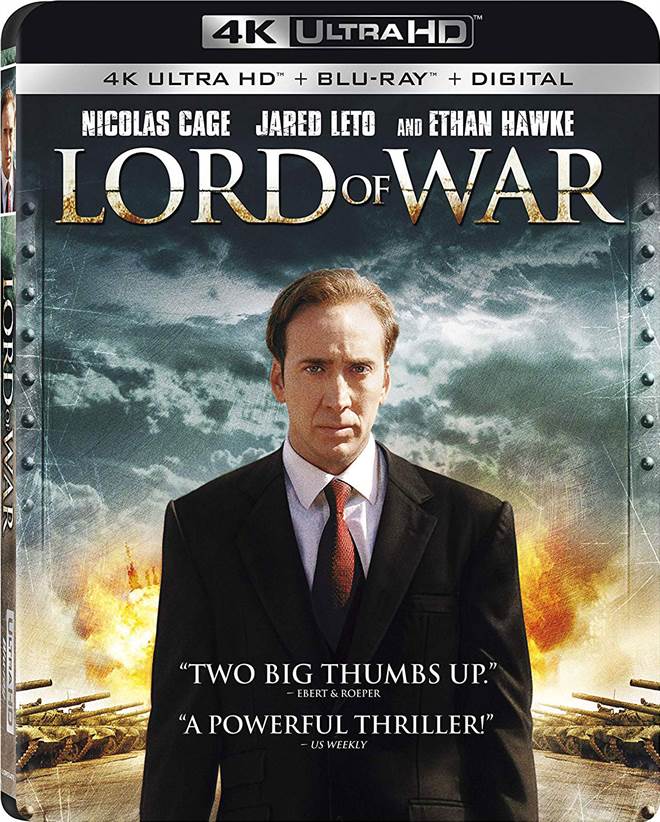 Purchase   DVD/Blu-ray/4K UHD
Stepping a bit out of my horror comfort zone, I set upon the task to watch Lionsgate's 4K re-release of the 2005 Nicolas Cage thriller Lord of War.

I am far from a Nicolas Cage (National Treasure) fan; however, in this case, I found myself really engaged in watching this movie. Let me say that Yuri Orlov is one of the most despicable characters to grace the silver screen, in what was a surprising morality tale, instead of a crazy action/thriller, which is what I expected.

I never watched this when it first came out in 2005, so I had no idea what I would find but I was pleasantly surprised to see Cage at his restrained best during most of this film.  Although he had a few fine moments of unrestrained madness, he generally left the scenery chewing to a bare minimum.

In case you aren't familiar with this one:

Chance leads Yuri Orlov (Nicolas Cage) to discover his one talent - illegal arms dealing. With his brother's (Jared Leto; Suicide Squad) help, he reaches the top of the trade, supplying anyone whose check clears. His skills and quick wits bring him everything he's ever wanted - and help him elude a persistent Interpol agent(Ethan Hawke; Training Day ). But at the peak of his prowess, he discovers his customers might demand more than he can give...and those he's trying to protect could become deadly liabilities.

Cage spends much of the film's 2 hours narrating the rise and fall of Yuri Orlov. This character is grimy and despicable. He lies to everyone - his model wife, parents, brother, Interpol. The only person he doesn't lie too is himself. He readily admits that he is good at what he does - selling weapons to very bad people. Some call them Freedom Fighters but Yuri knows that's bullshit. He knows it's all bullshit but he loves the thrill of the sale, the profits he makes, he loves the drugs he snorts and the prostitutes he has sex with. He has zero qualms about anything he does. Even after he loses everything, from his wife and child to his parents, his brother even sacrifices himself so Yuri will see the error of his ways but none of these things move him much. In the end, Yuri's greed remains the one sickening constant. And all of his misdeeds go unpunished. Dare I say, he is even rewarded? And the gray area posed in this movie is what makes it so good. Bad people go free every day, the morally bankrupt remain unpunished and even the good guys in power, are not squeaky clean. At All!

The 4K UHD  presentation here was impressive with a 2160p transfer in 2.40:1.  For the most part, the movie looks excellent except for the opening credits, where we follow a CGI scene of the life of a bullet. We go from the factory to the shipping container to the magazine rifle, where the bullet is fired from a machine gun and into the head of a young boy in West Africa. While otherwise powerful as an intro, the digital images are archaic and grainy. However, the rest of the film looks great. From shadowy interiors of Eastern Block military bunkers to the blazing sun of the Sahara Desert, even the fine details of Andre Baptiste's (Eamonn Walker; Oz) linen suit are amazingly detailed. Lionsgate did a fantastic job updating Lord of War.

The audio is also well-done.  The update to Dolby Atmos is solid and we are treated to moments of subtle and discrete effects, like background gunfire to the upfront and personal Nic Cage narration. The dialog is never lost and the few moments of real action are engaging and pull you into the conflicts that Yuri does his very best to propagate.

But keep in mind, this is not an action flick. There's no real focus on combat, explosions, or violence. They are tangents and take a back seat to what's really important - the power brokers controlling the war machines. Don't expect massive scenes of conflict. It's just not that kind of film.

As for the special features, there are a few. Seven, in fact.  Deleted scenes, The Making of Lord of War featurette, Inside the Arms trade documentary, which was interesting, and the obligatory Commentary tracks. Pretty pedestrian, if you ask me but, again, it's not that kind of film, and, keep in mind, these extras are 1080p, but upscaled, and nothing to write home about.

This all being said, Lord of War, is a surprising morality tale of Evil vs. Evil where good seems to have been pushed to the side. At the end of the film, Yuri continues to sell arms and we are treated to a splash on the screen about how the top 5 members of the UN Security Council, America, Russia, China, The UK, and France are all the biggest Arms dealers in the world. We begin to understand the moral cesspool Yuri has been swimming in for 25 years. We are also made to believe that since the powers-that-be condone it, we cannot change the system. What's frustrating and sad is that they are probably right.

For more information about Lord of War visit the FlickDirect Movie Database. This release has been provided to FlickDirect for review purposes. For more reviews by Leonard Buccellato please click here.

Lord of War images are © Lionsgate. All Rights Reserved.