The beauty of Batman Returns is definitely the villains. From DeVito and Walken to Pfeiffer, they all bring their A game and it pays off with three meaty, evildoers to sink your teeth into. 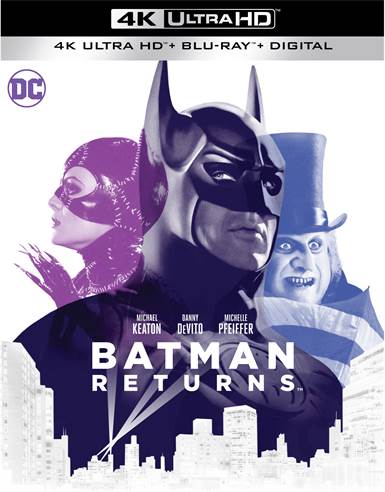 Purchase   DVD/Blu-ray/4K UHD
After the success of 1989's Batman and Tim Burton (Edward Scissorhands) and Michael Keaton's (Spotlight) ability to reboot and reinvigorate the entire franchise, Warner Bros. continued with a second installment in 1992 called Batman Returns. The darker, more sinister vibe that Burton brought to the story appealed to fans and mere moviegoers alike and set the tone for Batman Returns.  The sequel made 120 million dollars worldwide on an 80 million dollar budget and earned mainly favorable comments from critics.  As the 1989 Batman is celebrating its 30-year anniversary, Warner Bros. has released four films, including Batman Returns, in 4k.

While Barman Returns is technically a sequel, the story and characters make it unique enough to be a standalone film.  We see billionaire Bruce Wayne (a.k.a Batman) running a successful company by day and capture criminal by night.  Meanwhile, "The Penguin" (Danny DeVito; It's Always Sunny in Philadelphia) emerges from the sewer system supposedly to find who he is and where his parents are.  He is given access to Gotham City's records and spends days looking for the truth discovering that his real name is Oswald Cobblepot,  While his request seems innocent enough he has an ulterior motive for gaining access to the records.

As Oswald team with businessman Max Shreck (Christopher Walken; The Deer Hunter) who suggests he run for Mayor of Gotham, Oswald plots is revenge on the wealthy citizens of his fair city.  Just as things can't seem to get much worse for Batman, another villain makes her appearance in the form of a Cat Woman in a skin-tight costume (Michelle Pfeiffer; Ant-Man and the Wasp).  As Bruce Wayne and Catwoman's alter ego, Selina Kyle, get closer things in Gotham's underworld become a game of cat and mouse to try and stop Oswald, Max, and Catwoman from destroying Bruce's beloved City

If possible, Keaton is even better on the second go around in his portrayal of the Dark Knight.  He seems even more comfortable in the role than he did the first time, which may have something to do with the success of the first film.  DeVito is brilliant as the awkward "penguin man" who was thrown away by his parents as an infant because they couldn't handle his disfigurement.  Walken is perfectly cast as one of the villains in this evil triangle and you can see Burton's influence over the Look and feel of Max.  Pfeiffer rounds out this trifecta of meanness with her take on on Catwoman.  She blends sex appeal and brains to combine into a lethal dose.

The movie is presented in 2160p high definition video quality and Warner Bros did a great job with this transfer.  Details are sharp and clean which makes for a much better viewing experience, while dark tones are deep and true.  The Dolby Atmos audio is really a step up and envelopes the audience in all the sounds the film offers.  The extras in this combo pack are the same from the previous Blu-ray release and include:  Audio Commentary by Director Tim Burton, The Bat, the Cat and the Penguin, Shadows of the Bat: The Cinematic Saga of the Dark Knight Pt. 4: The Dark Side of the Knight, Batman Returns: The Heroes, Batman Returns: The Villains; Beyond Batman, Music Video "Face to Face" by Siouxsie and the Banshees, and the Theatrical Trailer.

The beauty of this movie is definitely the villains.  From DeVito and Walken to Pfeiffer, they all bring their A game and it pays off with three meaty, evildoers to sink your teeth into.  Keaton is just as good as his first time but his performance is enhanced by these terrific actors and the roles they were given.

I can't recommend buying this 4K release… on its own.  You will need to buy all four to really experience the series as it was meant to be seen.

Download Batman Returns in Digital HD/4K from the iTunes store.

Listen to the Batman Returns soundtrack on Apple Music.

For more information about Batman Returns visit the FlickDirect Movie Database. This release has been provided to FlickDirect for review purposes. For more reviews by Allison Rose please click here.