Bomer offers the perfect blend of vocals to the role of The Flash/Barry Allen. 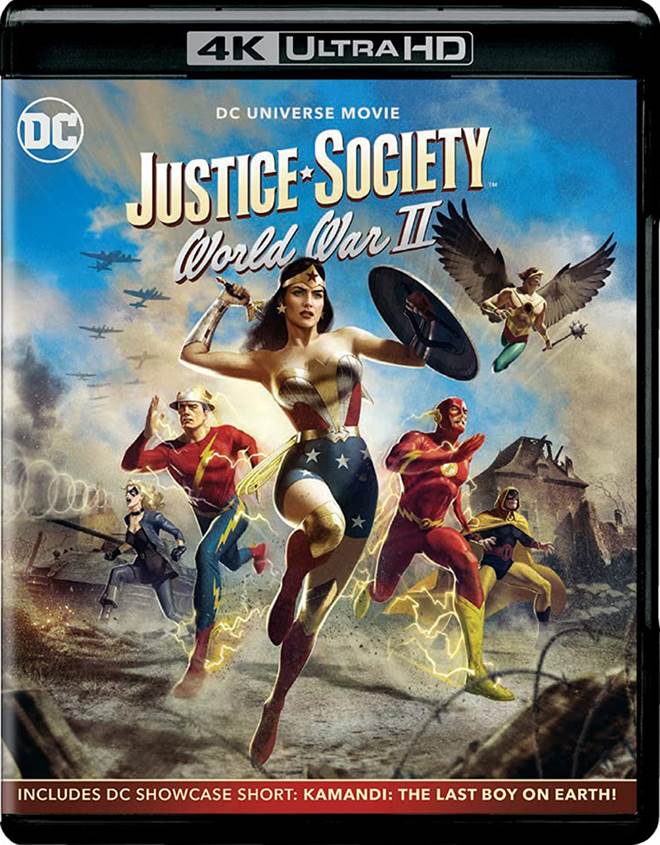 There have been forty DC Universe animated original movies made beginning in 2013 all the way through the year 2020.  These direct-to-video films offer fans creative options to watch some of the comic books' series most beloved works while also bringing new life to this world by giving audiences a number of original plots as well. The combination seems to strike the perfect balance for fans who get to watch the comic books they know, and love turned into "cartoon feature films" while seeing new stories come to life.  This year Justice Society: World War II is one of the later films taking a look at an origin story for The Flash? Barry Allen (Matt Bomer; The Normal Heart).

Allen is spending some quality time with his girlfriend, Iris West (Ashleigh La Throp; The Handmaid's Tale).  The two walk around Metropolis and stop for a picnic lunch.  Just as they are about to enjoy their meal, they hear cries for help and Barry runs to help Superman (Darren Criss; Glee) stop Brainiac (Darin De Paul; Shazam!).  While doing so, Allen seemed to have time traveled, not only to the past, but a unique dimension. There he meets the Justice Society and aids them as they attempt to beat the Nazis.

Making his animated feature film debut, Director Jeff Wamester does a good job with the material he was given by writers Jeremy Adams and Meghan Fitzmartin (Supernatural).  Since this is a mash-up of new and past versions of superheroes and the story doesn't come directly from a comic book, there is some ambiguity as to what the real purpose is behind the movie.  Yes, it is the first time the Flash experiences speed force and obviously sets up the "Justice Society" as a precursor to the Justice League but otherwise, the plot is merely "ok".

The cast tends to be a mixed bag as well.  I loved the television show Castle but Stana Katic, who voices a European Wonder Woman, was never my favorite actress.  For me, there has always been something wooden about her performances and this is simply more of the same. Conversely, Bomer offers the perfect blend of vocals to the role of The Flash/Barry Allen.  Sometimes humorous, sometimes series he knows how to bring the right intonation to his voice without overdoing it.  Criss, De Paul, and Chris Diamantopoulos (The Three Stooges), as the voice of Steve Trevor, bring solid performances that neither distract nor enhance the leads.

The video on the Justice Society: World War II 4K gives the picture color and detail a slight uptick from the Blu-ray version and, while it isn't a tremendous difference, it is still a difference.  The DTS-HD Master Audio 5.1 is somewhat superior to the video quality.  It gives depth and layers to the voices, ambient sounds, and gunfire/explosions making it rich throughout.   The Combo Pack comes with the 4K and Blu-ray discs, Digital HD code, and the following extras: DC Showcase Short: Kamandi: The Last Boy on Earth!,  Adventures In Storytelling: Justice Society: World War II, A Sneak Peek at the Next Animated DC Universe Movie, Batman: The Long Halloween Part One, A Preview of Justice League vs. Teen Titans, A Preview of Wonder Woman: Bloodlines, and From the DC Vault: Justice League: Legends (Part 1) and Justice League: Legends (Part 2).

Warner Bros. Animation always delivers quality when it comes to the animated DC Universe and, while it isn't my favorite from the recent Blu-ray/4K releases, it is another solid, job well done for the cast and crew.

If Warner Bros. Animation can make this story look and sound pretty good, I'm eager to see what they do with Batman: The Long Halloween Part One, coming in October.