Ron's Gone Wrong is a really heartfelt story about friendship and is thought-provoking as well. 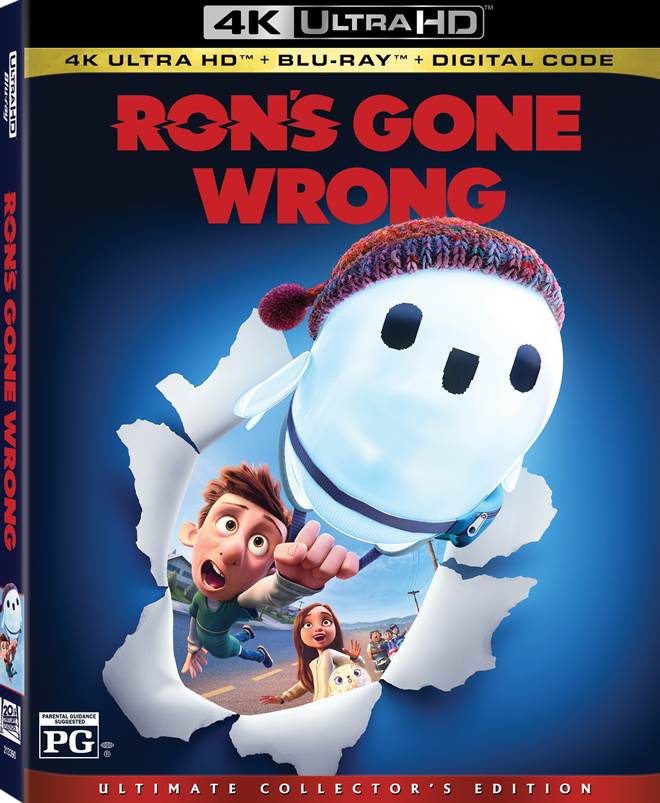 After many delays due to the pandemic, "Ron's Gone Wrong", was finally released on October 22, 2021, to critical acclaim. The film has also earned almost $60 million worldwide at the box office. Now, fans or newcomers can get this thought-provoking film on 4K Blu-ray for their home entertainment collection.  Middle schooler Barney Pudowski is the only kid in his class that doesn't have the newest and hottest toy, the "B-bot". This new toy is a robot buddy that has the sole purpose of helping a child make new friends. After Barney's novelty-selling father and his grandmother Donka realize that Barney has no friends, they decide to finally give in and purchase a B-bot. When they go to a Bubble store to buy it, they find out that the store is closed. However, lucky for them, a delivery driver had one on hand that had fallen out of the truck and was slightly damaged. They purchase the B-bot and bring it home to Barney as a late birthday present.  Barney soon finds out that the B-bot isn't working correctly and decides to take it to the Bubble store to have it fixed on his own, trying to spare his dad's feelings. During a bullying mishap on the way, Barney sees that his B-bot is something other than what he thought - it was something that would stick up and fight for him. Unfortunately, this isn't seen as a positive thing by the manufacture and now Barney must fight to keep his new friend, who he names Ron, alive and in his possession.

"Ron's Gone Wrong" is a really heartfelt story about friendship and, as I mentioned earlier, is thought-provoking as well. It shines a light on the role that technology plays in our society and how, ultimately, Barney's life was enhanced by it, but not ruled by it. He learned to stand out on his own, through a sacrifice he made for friends. The plot is definitely a great lesson for kids and adults alike. The voice cast, of course, brings the whole film to life with genuine emotion. This wonderful cast is comprised of Zach Galifianakis (The Hangover) as Ron, Jack Dylan Grazer (It) as Barney, Olivia Colman (The Crown) as Donka, Ed Helms (The Office) as Graham, Justice Smith (Pokémon Detective Pikachu)  as Marc, Rob Delaney (Catastrophe) as Andrew. All actors bring their "A" game to this project, acting just as masterfully as they would in a live-action film.  Galifianakis and Coleman are always personal favorites and combines with the rest of the cast, they bring the heart and soul to this witty and intelligent story.

The 2160p resolution, UHD 4K offers the best picture quality available and, while the details and color palette looks amazing, there isn't that much of a difference compared to the Blu-ray version.  There is a slight uptick in sharpness but the original also offers similar clarity. Accompanying the 4K visuals is a crisp and clean Dolby Atmos audio track.  The surround sound speakers get a nice workout and the dialogue is easy to hear but the overall audio quality is a little thin.  The track is serviceable but do not expect any amazing ambient sounds or multi-layered.

The 4K version doesn't have any new features but includes these features that are also on the Blu-ray:

"Ron's Gone Wrong" is a really heartfelt story about friendship and, as I mentioned earlier, is thought-provoking as well. It shines a light on the role that technology plays in our society and how, ultimately, Barney's life was enhanced by it, but not ruled by it. He learned to stand out on his own, through a sacrifice he made for friends. This film is definitely worth a watch with or without your kids.

Listen to the Ron's Gone Wrong soundtrack on Apple Music.

For more information about Ron's Gone Wrong visit the FlickDirect Movie Database. This release has been provided to FlickDirect for review purposes. For more reviews by Maureen Buccellato please click here.