The best part of The Unbearable Weight of Massive Talent is how these two men get along and create a “bromance”. 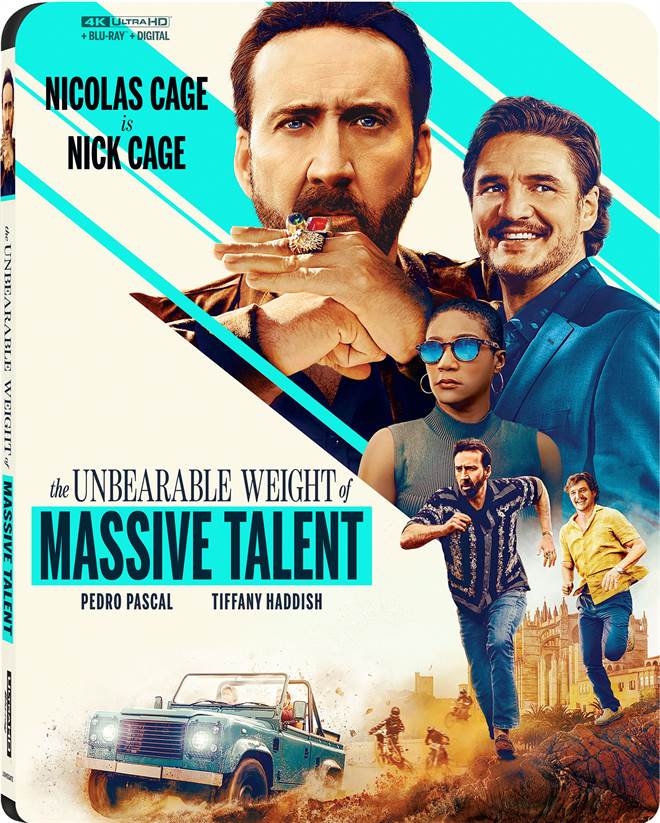 Being an actor is not an easy profession, even for those who "make it".  Famous actors often have hills and valleys in their success and at any time they can be one bad movie or one stupid comment away from becoming public enemy #1. Of course, this could also set them up for a big "comeback" followed by years of job offers and prosperity.  John Travolta (Pulp Fiction) is a perfect exam of this, having been successful when he was young, then seeing his popularity wane. Only to be on an upswing again with the release of the 1994 Quentin Tarantino film. Nicolas Cage (Leaving Las Vegas) seems to be in one of these valleys in his latest feature film, The Unbearable Weight of Massive Talent.

Nicolas Cage is a well-known actor who has had numerous hit films over the years but who is now experiencing a bit of a slump.  He manages to meet with directors (sometimes by stalking), to try and persuade them to cast him in their latest film.  As none of those leads pan out and he has a stack of mounting bills, he agrees to be the guest of a fan, Javi Gutierrez (Pedro Pascal; The Mandalorian) at his party in Mallorca. Initially, Cage doesn't want to be there and it shows in his actions and demeanor.  However, after spending some time with Javi, the two men form an unexpected bond.

Cage made a smart choice by becoming the butt of some of the more well-known jokes told about him.  He is wonderful in this movie and, though he does play Nicolas Cage, he most definitely doesn't seem to be playing Nicholas Cage.  While I'm sure there is more of himself in this character than any other one he has portrayed to date, there is still a difference when you compare his persona in this film and his interviews for previous movies.  Pascal is very good as well but the best part of the movie is how these two men get along and create a "bromance".  These gentlemen need to either make a sequel or find another project they can star in together. Honorable mention goes to Tiffany Haddish (Girls Trip) who adds to the hilarity by portraying an undercover FBI agent, who enlists Cage to help build a narcotics case against Javi.

Visually, the 4K disc offers the viewer more in terms of details and coloring.  The Mallorca landscape lends itself to a sharper picture quality with turquoise waters and majestic backdrops.  If you have ever wanted to visit exotic places around the world this movie will make you yearn to add Mallorca to your list.

The Dolby Atmos audio does not disappoint either.  Rich, deep, tonal textures permeate the film, utilizing all of the surround speakers, hence, enveloping the viewer into the full and layered experience.  The Blu-ray Disc includes the 1080p version of the film and the extras, which include Audio Commentary by Writer / Director Tom Gormican and Writer Kevin Etten, Deleted Scenes, The Mind, Glimmers of a Bygone Cage, Everybody Needs a Javi, Nick, Nicky, and Sergio, Second Act Action, Cages 5 and Up and SXSW Film Festival Q & A.

I wasn't quite sure what to expect from The Unbearable Weight of Massive Talent but, whatever I was thinking, it wasn't what I got.  Cage is, at times, self-deprecating, snobby, kind, warm-hearted, etc. which makes him a little bit more likable as the film progresses. He and Pascal have terrific chemistry and, I for one, hope they do other projects together as their banter and friendship make the film all the more enjoyable.

For more information about The Unbearable Weight of Massive Talent visit the FlickDirect Movie Database. This release has been provided to FlickDirect for review purposes. For more reviews by Allison Rose please click here.

The Unbearable Weight of Massive Talent images are © Lionsgate. All Rights Reserved.