As sequels go, Scream 2 is a cut above the rest with fresh faces, a story that keeps the viewer engaged throughout the two-hour run time. 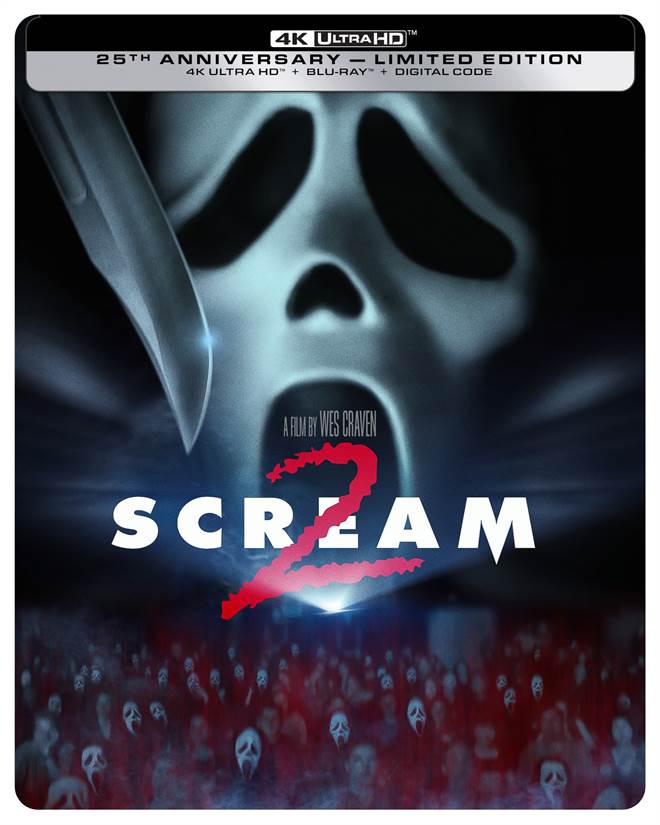 Twenty-five years ago, one of the beginning scenes of a movie was a group of students sitting in their college film class discussing if there has ever been a sequel as good as, or even better than the original.  Ironically, the movie was Scream 2 - a sequel that may not have been better than 1996's Scream but certainly wasn't as bad as other movie sequels.  In fact, Scream and its sequel spawned a whole franchise that continues to this day.  In honor of the twenty-fifth anniversary of Scream 2, Paramount Pictures Home Entertainment is releasing the movie in 4K along with a limited edition steelbook.

After surviving the murder spree in her hometown of Woodsboro, Sydney Prescott (Neve Campbell; The Craft) looks forward to putting the past behind her while away at Windsor College.  However, when two Windsor College seniors are murdered at a sneak preview of the new horror movie Stab, Sydney is suddenly the center of attention once again.  Stab, it is revealed, is a fictionalized version of the events which occurred in Woodsboro and when another student Cici (Sarah Michelle Gellar; Buffy the Vampire Slayer) is killed in her sorority house,  people start descending on Windsor, including Dewey Riley (David Arquette; Never Been Kissed), Gale Weathers (Courtney Cox; Friends) and local reporter Debbie Salt (Laurie Metcalf; Roseanne).  Little do they all know, the killer is right under their noses.

Campbell has become synonymous with the Scream franchise and Sydney seems to be a role she is destined to continue playing.  Casting her in the original film was a smart move that paid off for both the actress and the franchise.  Arquette and Cox are also associated with Scream and all the sequels and, over time, they have grown into these characters.  Metcalf and Jerry O'Connell (Stand By Me) as Sydney's college boyfriend are welcome additions to this second installment. With the sequel once again penned by Kevin Williamson (I Know What You Did Last Summer) and directed by Horror guru Wes Craven (A Nightmare on Elm Street), this movie with this cast was in very capable hands.

The 2160p video quality is a little bit surprising because usually there is a noticeable upgrade from Blu-ray to 4K.  Details tend to be sharper and colors are more robust and vibrant.  However, that isn't the case with this release, and while there still is some heightened clarity and sharpness, it isn't much.

The same can be said about the DTS-HD Master Audio 5.1 which has been ported over from the previously released Blu-ray.  There is no upgrade whatsoever here nor any enhanced ambient sounds so while the audio is fairly decent, don't expect anything new.

Scream 2: 25th Anniversary Edition Steelbook comes with the Lionsgate Blu-ray edition and a redeemable digital copy and has a great cover for those who are collectors.  Sadly, that seems to be the only thing new as all the extras consist of previously released material.  The extras include: Audio Commentary, Deleted Scenes with Optional Commentary, Outtakes, Featurette, Music Videos: Master P "Scream" and Kottonmouth Kings "Suburban Life", Theatrical Trailer, and TV Spots.

As sequels go, Scream 2 is a cut above the rest with fresh faces, a story that keeps the viewer engaged throughout the two-hour run time, and a movie that manages to stay true to the franchise and Williamson's vision.  As far as twenty-fifth anniversary 4K steelbooks go, this one seems almost like an afterthought, just like the husband who forgets his wife's birthday and runs to the flower shop after work to buy whatever they have on hand so as not to get the wife angry.

Download Scream 2 in Digital HD/4K from the iTunes store.

Listen to the Scream 2 soundtrack on Apple Music.

For more information about Scream 2 visit the FlickDirect Movie Database. This release has been provided to FlickDirect for review purposes. For more reviews by Allison Rose please click here.