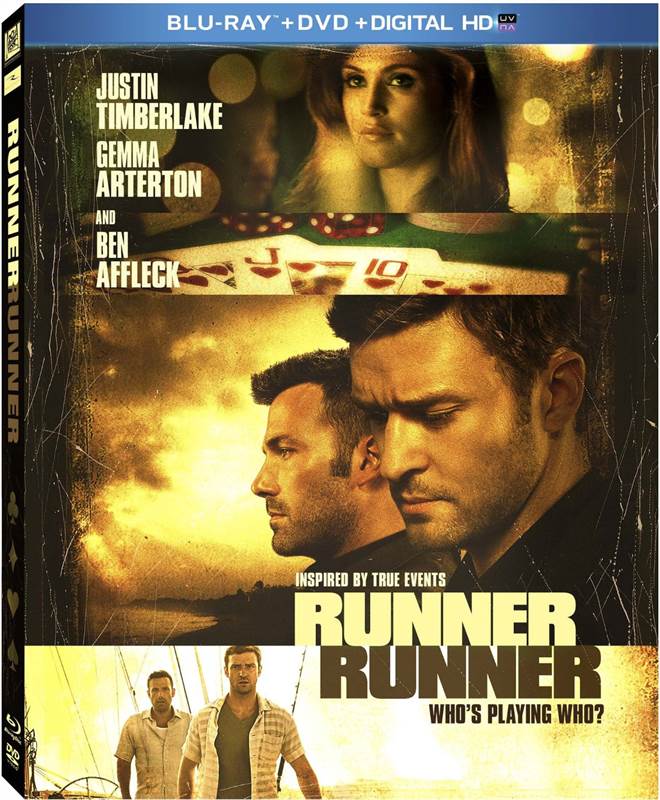 Purchase   DVD/Blu-ray/4K UHD
The internet has probably been as much of a curse as it has been a blessing, and perhaps nowhere is that first tendency as clearly evident as in the case of online gambling. In days of yore, one had to go to physical establishments (most of them in places like Las Vegas) to get a dose of adrenaline as dice were tossed or cards were dealt. But with the development of the world wide web, one of the chief vices (along with porn) that became rampant globally was the profusion of gambling sites. According to a whirlwind montage that sets Runner Runner off on its highly improbable course, online gambling accounts for literally hundreds of millions of dollars of activity every year, and as an internet guru played (rather improbably) by Ben Affleck avers somewhat later in the film, his particular site clears well over $750,000 in net profit per day. Per day. There's a bit of "déjà vu all over again" throughout Runner Runner, especially for those who may have seen the somewhat similar 2008 drama 21 starring Kevin Spacey. In both of these films, scrambling for the insane tuition costs at a Ivy League school lead students to gamble, and in both films, statistical evidence provides a fulcrum on which part of the plot hinges. In this particular instance, Justin Timberlake portrays (yes, rather improbably) newbie Princeton Masters Degree student Richie Furst, who has ended up at the school after his cushy hedge fund manager job went up in smoke with the Wall Street bust of a few years ago. Richie has been referring players to an online gambling site for a small commission, but when the Princeton bigwigs get wind of the situation, they put Richie on notice that his efforts must stop. Like any adrenaline junkie, Richie decides to just get on the site himself and play online poker in order to make his tuition in one fell swoop, but he's handily beaten by a guy who doesn't seem to even know the basics of poker. When he enslists a buddy of his with an expertise in statistics to prove that this wasn't a mere fluke, he decides that heading off to Costa Rica to confront the owner of the site is the best option.

The owner of the site is one Ivan Block (Ben Affleck), who is in exile and likes to quote Napoleon's desires for human contact (I'm putting this as delicately as possible) while on Elba. Block keeps himself well protected by a coterie of henchmen and (in yet another improbability) a rather glamorous female named Rebecca (Gemma Arterton). Richie manages to weasel his way into a private party being held by Block, one of those hilariously over the top soirees that only ever show up in films like this, one replete with carnival rides and insanely glamorous people drinking cocktails and engaging in supposedly scintillating banter. Richie has come prepared, though, thrusting some blacklit papers at a security camera which informs some unseen power that Richie has proof of cheating on Block's site. Richie is briefly ushered into Ivan's inner circle, where he tells Ivan he could have gone to the police or (even worse) bloggers, and while Ivan expresses some curt appreciation, he has his henchmen show Richie the way out.

The next day, however, Richie is escorted (again by those nefarious henchmen) to Ivan's private yacht, which is nicknamed The House (because, as Ivan states it, The House always wins). Ivan is a bit more receptive to Richie this time out, and not only returns the kid's money, but gives him enough to finish Princeton. He also makes Richie an offer he can't refuse. That finally sets the film on what turns out to be its main course, which involves Richie becoming the pawn of both Ivan (who turns out not to be such a nice guy, after all) and a scheming FBI Agent named Shavers (Anthony Mackie), who wants to bring Ivan to justice but hasn't been able to line up the dominoes to do that thus far. The bulk of the film deals in a kind of "who's playing whom" approach that brings to mind another lackluster would-be thriller, the recent Paranoia.

Runner Runner is such an overheated potboiler that it would be funny if the actors weren't so deadly serious about it all. The film is undeniably scenic (albeit in a sometimes unseemly way, as the teeming hordes of poor people in Costa Rica are shown in passing), but it's all so patently silly that it delivers neither thrills nor suspense. Timberlake is probably better than many would assume he might be, which doesn't necessarily translate into him actually being good. Affleck is similarly fine, if uninspired, and Arterton of course offers a dose of scenery that only a curmudgeon would describe as unseemly. The screenplay here is just downright ludicrous, and director Brad Furman (who fared much better with The Lincoln Lawyer ) simply doesn't know how to ameliorate the damage.

Runner Runner is presented on Blu-ray courtesy of 20th Century Fox Home Entertainment with an AVC encoded 1080p transfer in 2.40:1. This high definition presentation is often quite beautiful looking, with somewhat pushed contrast and deeply saturated colors which are often skewed toward an orange amber side of things. Fine detail is very good if not overwhelming throughout the presentation. Runner Runner features a lossless DTS-HD Master Audio 5.1 mix which tends to be a bit more front heavy than many films of this general ilk. While there's some attention to ambient environmental sounds, the bulk of the surround activity here tends to be with regard to Christophe Meck's score and the occasional source cue. Dialogue is always cleanly and clearly presented, and the track boasts excellent fidelity and above average dynamic range.

Special Features: Runner Runner piles on so many improbabilities that it all collapses under the accrued weight. The cast is certainly attractive if not overly skilled, but the dialogue is so relentlessly ludicrous that probably not even Sir Laurence Olivier could have made a go of it. Director Brad Furman simply doesn't seem to know how to shape this ungainly mess, and the result is a pretty tepid stew that lacks any real thrills or suspense.
Cast:
Directed By:
MPAA Rating: R

John Delia
There are a lot of things you may not know about online gambling, but if you're interested Runner Runner tells all.  The movie features two of Hollywood's prominent stars Justin Timberlake and Ben Affleck who face off against each other in a world that pays off big if you are on the right side ...
Full Review | Grade: D