The end result of the Robocop remake is that it simply wasn't necessary but it isn't bad. If you're going to watch it at home, though, the Blu-ray is well worth the cost. 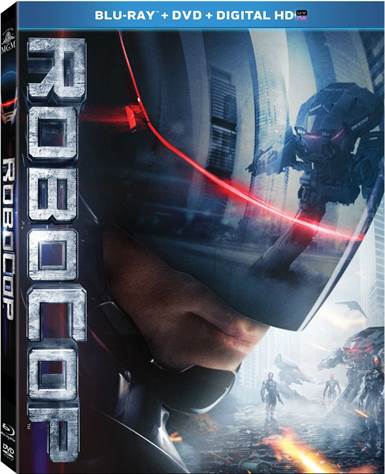 Purchase   DVD/Blu-ray/4K UHD
Remakes of classic science fiction movies are usually more hit than miss because good science fiction manages a timelessness that doesn't demand a remake. Yes, special effects have come a long way—but leaving out the added stuff, did the refresh of Star Wars really help it? I don't think so. The original took us to a galaxy far, far away and it doesn't have to be super busy, cluttered with CGI to keep us there.

It doesn't help that the original Robocop was, frankly, a nearly perfect movie. It was shockingly violent and vulgar. It was bitingly funny. It was smart. I'd read that robots had trouble with stairs and when the ED-209 failed to follow Robocop down a stairwell I was thrilled.

The remake takes us, again, to a crime-ridden Detroit and again introduces us to Officer Murphy (Joel Kinneman, Safe House) — a good cop on the trail of drug lords and bad cops. When he's the victim of a car bomb, Omni-Corp, needing a human face on its robotic / drone protection project, puts him back together as Robocop.

The story follows both its ‘message' story-line of Omnicorp's government and media campaign to get robot-security forces into America using Robocop to convince those who don't want soulless machines killing people and Robocop's own story of recovery, reuniting with his family, and dealing with his scene-stealing doctor played by Gary Oldman (The Dark Knight, Harry Potter and the Prisoner of Azkoban).

The first part if this story works pretty well.  We see robotic 'peace-keepers' which are totally terrifying and have Samuel L Jackson  (The Avengers, Django Unchained) as a right-wing media star telling us that we ought to be thrilled to have robot police officers with heavy cannons watching over us. We see board-room meetings that feel pretty right--if never living up to the original Robocop's apocalyptic tech-demo-gone-wrong scene.

The Murphy-story-line isn't nearly so tight. He's loving (but his wife doesn't get to do much). He's recovering, he's back, he has his mind altered, he's  he's well.  In the original  his family was  in the deep background but in the new version they play a larger role.

Rather than trading action for heart, the original is actually tighter story-telling than the remake. We get an intro an arc, and then an ending character development. In the remake it feels like characters are being jerked around for plot-points.

The remake doesn't keep much of the humor of the original either.  There are some funny headlines on the news-ticker scroll but, instead, trades its in-world commercials for a narrative message: Drones are Bad. This message is timely as America's real-world drone-war is controversial--but keep in mind that rather than being indiscriminate or robotic, real-world drones are the most carefully targeted human controlled non-infantry weapons ever deployed.  Everything they do goes past analysts. Every shot they take is on video. The operators are always human. There are things to dislike about the drone war to be sure--but the position Robocop, even metaphorically, takes on drones isn't one of them. It isn't a stupid movie--but it isn't a daring one either. The message is watered down.

We see that decision in the almost bloodless nature of its violence. There's tons of shooting, multiple kills, but, unlike the original, almost no splatter ... and no sex. The future world of the Robocop remake is pretty much TV safe (it got a PG-13). Where the original was daring and shocking this one is comparatively mundane.

The Blu-ray itself is gorgeous. The 1080p resolution is high enough, the blacks are deep, and the colors are crisp. Robocop has a lot of dark scenes (including some night-vision-only combat scenes) and these don't come out murky at all.

It's an action movie and the DTS-HD Master Audio 5.1 will give you the right stuff for 360-combat scenes that Robocop finds himself in (in the remake he's highly mobile and often attacked from all angles).

The conversation is clear enough--most of the speaking that isn't simply expository is delivered by Samuel Jackson on a sound-stage so it doesn't need the audio--but it's nice to have.

Robocop's new graphene armor  looks great.  It is all 'tactical' black and the picture is clear enough to make the (excellent) articulation work stand out: it looks great. It doesn't look like 'a prop' and it doesn't 'get lost' when he's moving around a lot (although when he's moving around a whole lot, he's clearly CGI--but this is clear because of the clarity of the picture, not a fault with the presentation).

The extras are minimal: deleted scenes, theatrical trailers (does anyone watch those?). It comes with a DVD copy and an ultraviolet digital download.

The end result of the Robocop remake is that it simply wasn't necessary but it isn't bad. If you're going to watch it at home, though, the Blu-ray is well worth the cost.