The Finest Hours, while not a horrible film, really just isn’t that compelling of a story. 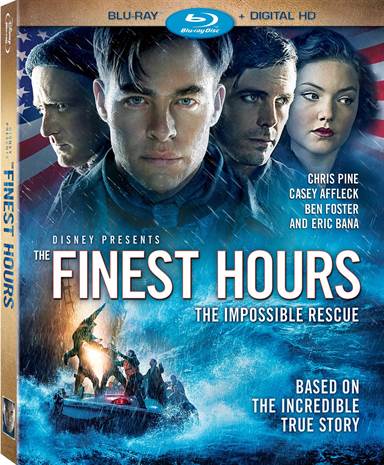 Purchase   DVD/Blu-ray/4K UHD
In case you missed the theatrical release of Disney's The Finest Hours, it has finally come to Blu-ray combo pack this week, just before the start of the United States Memorial Day 2016 weekend.

The drama, starring Chris Pine (Star Trek), Casey Affleck (Gone Baby Gone), Ben Foster (Warcraft), and Holliday Granger (Cinderella) is based on actual events. It follows the story of one the most heroic, and harrowing, Coast Guard rescue missions to date.

In 1952, Bernard "Bernie" Webber (Chris Pine) was a member of the U.S. Coast Guard stationed in Chatham, Massachusetts, and was called upon to perform a rescue mission in an extremely dangerous storm. The task was to find the stern of the T-2 Oil Tanker Pendleton, which was one of two tankers that had split in half during the storm. To make matters worse, their rescue boat was a 36 foot life boat. Even though Webber, and three other members of the team, knew that this could be a suicide mission, they headed out.

The Finest Hours, while not a horrible film, really just isn't that compelling of a story. Yes the courageous acts of Bernard "Bernie" Webber deserve to be told. But, couldn't they have been told better? The pacing of the film is very slow, and director Craig Gillespie (Fright Night) really doesn't add any suspense to the film. It is as almost if he read the story and filmed it with no passion at all. At no time did I care what happened to any of the actors or actress in the film, nor how they would survive. The only thing I truly cared about was how much longer there was until the film was finished.

The 1080p transfer of The Finest Hours gets the job done, but will not be a disc that you will pull out to show your friends the power of your home theater system. While filmed mostly at night, the colors, by choice, are very muted. Black levels are on par with what they should be and the sharpness is dialed so you see every texture on every surface possible.

The DTS-HD Master Audio 7.1 lossless soundtrack is truly the best thing about the film. The audio makes you feel like your are directly part of the historic storm. From every raindrop, to every wave crash, you are living the adventure at sea with the stranded crew of the T-2 Oil Tanker and the Coast Guard.

Most of the time, Walt Disney Home Entertainment is the leader in DVD extras they add to their releases. However, with The Finest Hours, Disney bucked the trend and went for pure fluff extras that are all total under 10 minutes each (some even only 2 minutes) and can easily be skipped over, aside from the Digital HD iTunes copy of the film. These extras include. Against All Odds: The Bernie Webber Story, Deleted Scenes, Brotherhood, Two Crews:  What Is Your Finest Hour?, and The Finest Inspiration: The U.S. Coast Guard.

All-in-all, The Finest Hours is not a bad film. The acting is decent, the story is compelling, and the special effects are up to today's standard. However, nothing in the story is truly compelling or makes you really care about the film. Perhaps, if it was edited better, and the pacing was a bit faster, the film could have benefited. Unfortunately, other than for the sake of recording a piece of heroic history, this film just isn't engaging enough for repeat viewing.

Purchase a DVD/Blu-ray/4K UHD physical copy of The Finest Hours today at Amazon.com

Download The Finest Hours in Digital HD/4K from the iTunes store.

For more information about The Finest Hours visit the FlickDirect Movie Database.