Zootopia Stands On Its Own Two Feet, just like its Anthropomorphic Characters! 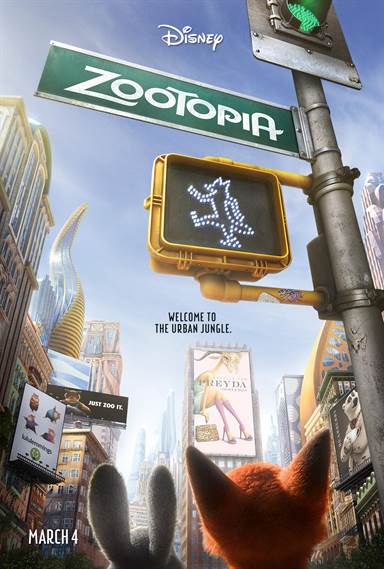 Purchase  DVD/Blu-ray/4K UHD
Welcome to Zootopia, Walt Disney's 55th animated feature,which will be released this week on BluRay, DVD and Digital download. Zootopia is all about a world where humans didn't exist. Animals evolved upright on 2 feet, wear clothes and have jobs. They live as humans do. Not really the most original idea, but there was a ton of thought as to animals fitting into jobs that actually reflect who they are and where they would belong. Lets just say it, stereotypes!(We'll come back to that later)

Our main character is Judy Hopps, this adorable little bunny whose childhood dream is to become a police officer. Teased and ridiculed by others, she defies everyone by entering the academy and never giving up. Judy not only graduates the Police Academy, but does so as the head of the class! And you know what that gets her? A job in the city, as a meter maid! Yup, while Judy may have proved things in the Academy, now, in the real world amongst elephants, tigers and rhinos, Judy is still viewed as a cuddly little bunny wabbit. While Judy feels this is unfair, she still puts on a chipper smile and goes out with the intent to do double the work that her bull-headed chief asked her to.

While out in the streets of Zootopia, she comes across Nick Wilde, a sly fox indeed who is in the process of pulling a con. Unbeknownst to Judy, she helps him in his cause and he goes on his way. Judy catches Nick in this scam and eventually finds him and blackmails him into helping her find what happened to a missing civilian.

Nick is the perfect amount of Street smarts to counter Judy's academy knowledge, and they become quite the buddy cop/detective team! What Judy and Nick are unaware of, is the case of the missing otter is actually the tip of the iceberg of a much bigger comspiracy!

Zootopia leans completely on the wonderful, charming voice of Ginnifer Goodwin (Snow White in Once Upon A Time) and Jason Bateman's vocal embodiment of the sly & sarcastic, Nick Wilde. The two play so well off each other character wise, which is truly amazing since they only recorded a few times together. The rest of the cast included Idris Elba (Thor's gatekeeper and star of Luther) playing the Chief Bogo, Mayor Bellwether is voiced by Jenny Slate (House of Lies & Bobs Burgers), J.K. Simmons (the former J. Jonah Jameson from Spiderman and Oscar winner for Wiplash) playing Mayor Lionheart along with cameo vocals from the likes of Bonnie Hunt, Tommy Chong, Octavia Spencer and the musical star presence of Sharkia, who sings Zootopia's theme song "Try Everything".

Zootopia is quite the clever film! Very witty, makes you laugh out loud and, at times,seems to have more jokes for the adults than for the kids! That being said, lets hit the underlying message - stereotypes and prejudices! From the assumptions of what a person (or animal) should be or should be allowed to be, to assuming that because you're a fox that makes you sly, or a bring a bunny makes you cute and not tough. This film gives clearly the message that you can be what you want to be! Trust in yourself and if you work hard you can do anything! Which really can't be a better message for kids today in a society that judges so quickly. It even goes into being open to people's differences, to be more accepting and who knows….they may surprise you.

That being said, the film itself is just outright BEAUTIFUL!  From the cinematography of a chase scene through Little Rodentia (a mouse village), to the crossing through rainforests to an amazing homage to The Godfather, this film literally pays attention to every detail right down to road signs and store front signs that will crack you up! Commending the team that worked on the visuals of Zootopia just isn't enough! They should be given many more projects to sink their teeth in and dazzle us with.

The only one issue I had with Zootopia was something it was lacking in. Heart. I keep saying this with many films but with Disney it's supposed to be a given! Disney films are known for making you feel deeply. Whether you're crying for the loss of Bambi's mom & Simbas father, falling deeply in love with a romance between a Prince and a Princess, or terrified of the Villains lurking on the horizon just waiting to knock the hero or heroine down, all these things make the main characters success more gratifying. You get more emotionally connected thru watching their struggle and while Judy's struggle may have been real, I didn't really suffer thru it with her. Even her parents weren't concerned (but with hundreds of children, I guess I'm being hard on the parents). What seemed to be lacking most, was LOVE.

Extras within the Blu-ray edition include: Zoology: The Roundtables, The Origin Of An Animal, Research: A True-Life Adventure, Z.P.D. Forensic Files, Scoretopia, Deleted Characters, Deleted Scenes and "Try Everything" Music Video by Shakira.

When all is said and done, Zootopia really is like nothing you've seen "befur"! It's a visual feast, with a strong moral message that comes packaged with a lot of laughs and its just as entertaining for the parents! It's definitely not "Frozen", but it's a great addition to the Disney Catalogue!

I give Zootopia four and a half Carrots out of five! Just don't ask Flash what he thought of it!

Download Zootopia in Digital HD/4K from the iTunes store.

For more information about Zootopia visit the FlickDirect Movie Database.