I give “Batman: The Killing Joke” one and a half stars SOLELY for the vocal talent, Mark Hamill’s singing number and the background artists, who without them, the movie would be an even bigger disappointment! 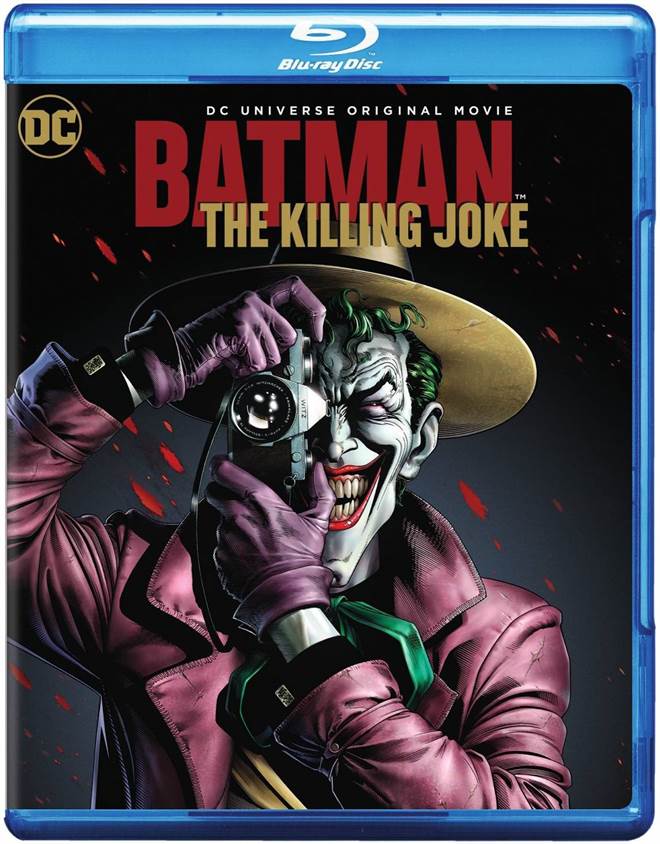 It's the death of so many movies and the one thing most project can never live up to. It's so frustrating because fans see the teasers, hear all about the dedication of bringing out the best in the project and the "early word on the street" is that it's the best ever made.  By the time it comes out and you drop the cash for it, you sit back in your seat and your just whelmed…. not over, not under…just whelmed. It's the most disappointing feeling in the world to a fan. This is how I felt with Batman: The Killing Joke.

Touted as the ultimate Joker comic, "The Killing Joke" gives insight to what happened before Joker became Joker. Full of violence and adult material, the writers and director told the studio it would be unable to produce a product worthy of the original comic without being given an "R" rating. And the studio gave the go ahead for the first animated Batman flick with an "R" rating.

This in itself created an expectation that I'm not entirely sure the film could live up to. I understand that creating violence inside an animated/cartoon world is different, but in the age where video games have a realistic darkness and blood flows, "The Killing Joke" violence just never even comes up to a "PG13" rating for me.

But before I get to far, let me give you insight to the plot of this story in 2 pieces. The beginning starts off where Batgirl tries to stop a robbery, and with the help of Batman they stop of one of the robbers, but Paris Franz gets away. Franz after ends up having a strange obsession with Batgirl and while Batman tells her she's off the case, Batgirl takes it personally and starts a fight. After knocking Batman to the ground, she straddles him, kisses him and pulls the top half of her costume off……and end scene. (hey isn't this rated "R"? Team America World Police had puppet sex and Batman gets no on camera grinding time?) Of course the whole situation is awkward. Hell Batman isn't the most vocal character to begin with and you think your going to get a love story? Nope. Now Franz gets Batman cornered, blows up his car and Batgirl comes in to save his butt for a change and then beats the living daylights out of Franz.  Afterwards Barbara Gordon ends up handing her stuff over to Batman and retiring her Batgirl persona.

There's the first 28 minutes, and all you got for a Rated "R" is one henchmen getting shot in the head, and Batgirl punching a dude in the face with blood on her gloves! So far this "R" rating sucks!

Fade in from black….Batman goes to a Crime scene (Obviously Joker's involved) and goes to prison to interrogate the Joker. There's a great monologue that Batman gives while expecting a response from the Joker…..but alas its not Joker across from him…it's Franz as a placeholder and Joker has escaped. Then in a sepia toned flashback, you get to see Joker as a Lab assistant at a chemical factory that gave up his job to be a comedian. Not a great time for a Career change with a pregnant wife.
So now I'm gonna say something I hate! I rarely go into the realm of spoilers, but with this one, comic book fans for the most part know this story so here we go! SPOILER ALERT!!

Present day Joker then goes to visit Barbara Gordon and shoots her right in the gut in front of her father and then kidnaps him. I'd give more details but it moves so quickly. He proceeds to torture Commissioner Gordon in a old funhouse while we get more flashbacks on Pre-Joker talking to some criminals about helping them thru the chemical warehouse, then one where he finds out his wife died. Joker is still torturing Gordon (now with a musical number) and Batman is still looking for Joker. Will the flashbacks end? Not until Batman finds this poor sap wearing a red hood in the chemical plant with two crooks….the crooks get popped and the hood gets dumped in the vat of chemicals. Ta Da! We have the Joker!

Back to the present where Batman fights off some carnies through a funhouse, then a one on one with Joker himself that ends with a Joke. Then, an awkward silence and credits.

Second 40 mins…a few gunshots, some red spots where holes and guts should be and I'm still waiting for that rated "R"!

So first let me say the voice work is fantastic! Mark Hamill truly is amazing as the Joker and from all I have read and heard, this is the rare piece that would bring him back to doing work as the Joker, and I'm glad he did! Kevin Conroy….Damn! I had the pleasure of talking to him about this project and in person, if you close your eyes…HE IS BATMAN! Tara Strong as Batgirl and Ray Wise rounded out this dream team of vocal talents that any animated director would kill to have on his project.

The Animation can be frustrating at times. I almost felt like the way they were promoting this so heavily that there would be more. There are so many strides in animation these days and while the background can look realistic and represent the graphic novels, the characters come straight out of the Saturday morning batman series look. Not saying that's a bad thing, but If I'm going to take a comic that has such violent & dark adult like material, why make it look like a kids cartoon. Why not make it look more like the graphic novel? Or at least as cool as the very own packaging the film comes in! After seeing what's possible in films like the Sin City Series and even some of the more creative animated films out there, it just stands to reason if your going to go balls out with vocal talent and have the studio behind you to go for a "R' rating….PUSH IT! Go for the gold and don't hold back!

THE ENDING!? What the……. Someone tell me what's going on with this decision to end it like this? I read up on how this film was supposed to end, and listening to an Interview of Grant Morrison by Kevin Smith. I listened to Morrison explain the genius of Batman snapping the neck of Joke, at the end, abruptly ending the laughter (Hence the title "Killing Joke"). Then I saw the last frame of the comic, which clearly shows a pretty pissed off Batman going for the kill. So what does a rated "R" version give us? Batman's hands on jokers shoulders like they are going out for beers together so they compare their notes on their "fun" with Barbara Gordon!? REALLY??

Did I fall prey to Hype? Did all the promotions of the First Rated "R' Batman film raise expectations too high?  All I know is "Batman: The Killing Joke" killed all my hopes and expectations for this animated feature. It may have been the closest to a frame by frame representation of the comic book, but this is a movie, not a book. And with all the stellar vocal talent in the world,  "Batman: The Killing Joke" came off just as flat as a comic book, and yet not as artistic as the images in the actual comic.

I give "Batman: The Killing Joke" one and a half stars SOLELY for the vocal talent, Mark Hamill's singing number and the background artists, who without them, the movie would be an even bigger disappointment!