As demonstrated by past seasons and her numerous awards, Claire Daines is an amazing actor that embodies the role of Carrie Mathison, the bipolar, former CIA agent. 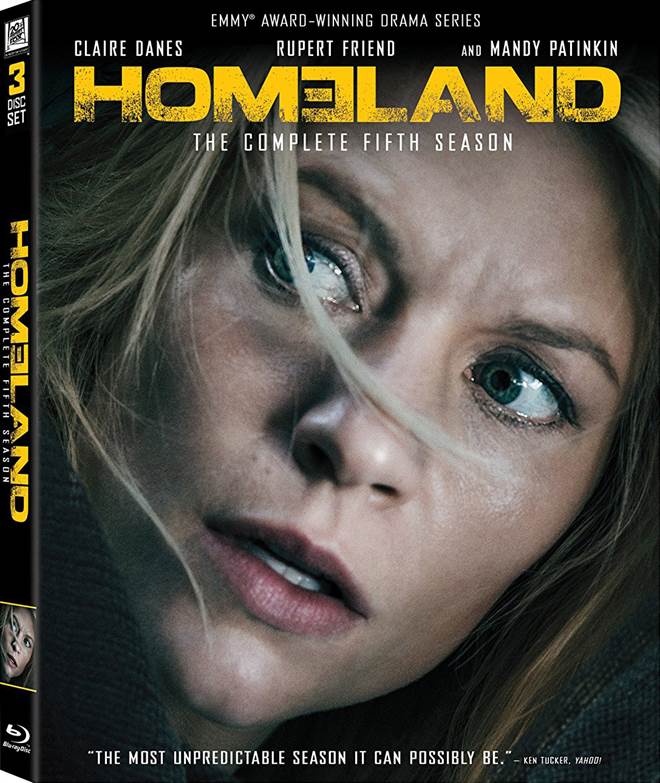 Purchase   DVD/Blu-ray/4K UHD
Showtime debuted Homeland in October 2011, and, since then, fans have followed the story of Carrie Mathison (Claire Daines, Stardust), a CIA operations officer who suffers from bi-polar disorder. Throughout the years, there have been many story arcs, perhaps most notably, the death of Nicholas Brody (Damian Lewis; Ocean's Eight) in season three.

After his death, the show's story writers had to scramble to see how to fill the void left by this major character of the show. Happily, they pulled it off very successfully in season four. Claire Daines' character, as well as the supporting cast of Mandy Patinkin and Rupert Friend, kept the spirit intact and moved much of the storyline from the United States to Islamabad.

Now, in season five, we find Carrie in Berlin, Germany, working as a head of security for a charity organization's billionaire owner.  She is living with her new love interest, Jonas Hollander, as well as her daughter, Frannie, in a somewhat more "normal" life. However, old times catch up with her as she finds herself in the position of having to, once again, deal with the CIA.

As demonstrated by past seasons and her numerous Emmy awards, Golden Globe Awards, and two Screen Actors Guild Awards, Claire Daines is an amazing actor that embodies the role of Carrie Mathison, the bipolar, former CIA agent. Daines explores all sides of Carrie's emotions, including her vulnerable side as well as how dangerous she can be in the field when she is put to the test. Also returning are supporting cast members  Mandy Patinkin,  Rupert Friend, and a few others that made their first appearance during season four of the show.

By expanding the show to Germany, as well as shooting on location, we gain a great perspective on how Europe deals with a post 9/11 world where threats are not always right before your eyes. The show's writers and producers consulted various intelligence services even before shooting a single shot for the season and it certainly shows on the screen.

As with past Homeland seasons on Blu-ray, Homeland Season Five is a wonder to behold. Shot in the theatrical ratio of 1.78:1, Homeland looks great. The scene details are shown in great depth and the cinematography truly shows off Germany beautifully.  The DTS-HD 5.1 audio track provides crisp and clear dialog as well as great special effects relegated to the rear channels. You can actually feel like you are in the streets of Berlin at some points of the series.

Special features for Homeland Season Five are included on the third disc of the set. These extra include:

Homeland season five continues the strong character development and suspense that the show has been known for. Now that season six has just started to air, it looks like that this will hopefully be the case for a long time to come.

For more information about Homeland visit the FlickDirect Movie Database. This release has been provided to FlickDirect for review purposes. For more reviews by Nathan M Rose please click here.