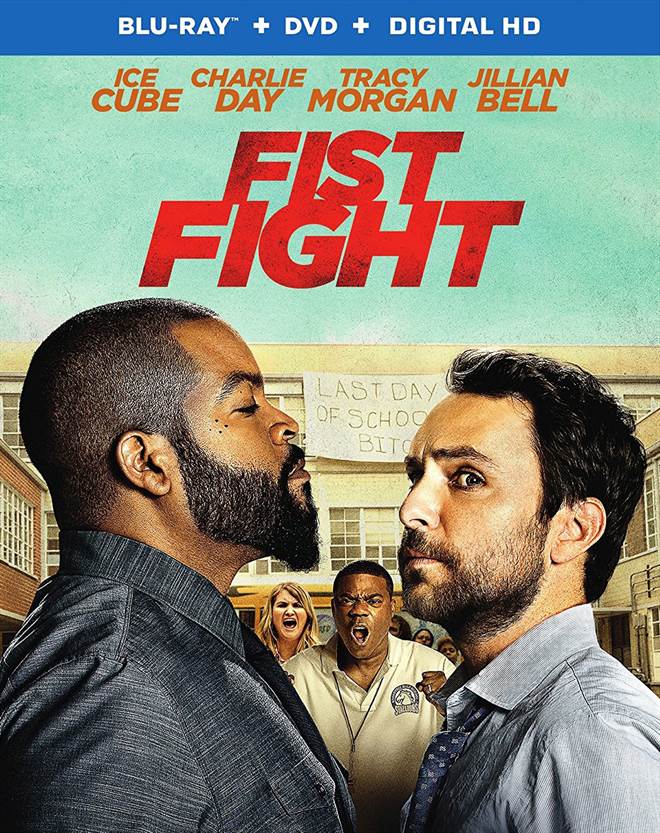 Purchase   DVD/Blu-ray/4K UHD
The last day of school is a happy occasion for every student and teacher but especially gratifying for high school seniors finishing their formal education for good (unless of course, they plan to go to college). At Roosevelt High School, that means tons of senior pranks and teacher frustration. This year it also means teacher reviews and terminations for some. Tensions are high and ripe for angry outbursts… all leading up to an epic Fist Fight.

Andy Campbell (Charlie Day; It's always Sunny in Philadelphia) is one of the English teachers and basically is known as a pushover by students and teachers alike. His wife is pregnant with their second child so he is terribly afraid of losing his job and will do almost anything to save it. Stickland (Ice Cube; Boyz in the Hood) is a hard-nosed history teacher with a reputation for anger. Students generally fear him and don't get away with anything in his class. Frustrated by the lack of discipline and aide in the school he is tired of trying to educate with nothing.

Through a series of events that occur on this last day of school, Campbell ends up ratting Strickland out in an attempt to save his own job. Strickland, angry with what Campbell did, challenges Campbell to a fistfight at 3 pm. When word of the supposed fight spreads it becomes the stuff of legend and Campbell spends the rest of his day trying to get out of it. In the end, Campbell finds a backbone, fights Strickland and both men end up keeping their jobs and making the school better.

Day and Ice Cube make a great team and have some truly funny moments together. Dean Norris (Breaking Bad) adds to the comedy as Principal Tyler and Tracey Morgan (30 Rock) as Coach Crawford has some great lines. Jillian Bell (22 Jump Street) is Holly, the drug addicted Guidance Counselor, and Christina Hendricks (Mad Men) is another teacher in the school who hates Campbell. All the supporting cast are terrific and help Day and Cube to shine.

The plot is a little thin and the action and comedy really doesn't pick up until over halfway through the movie. There are some funny lines that pay homage to Cube's previous work and a few really hilarious jokes. The beginning is a little annoying and slow but if you can sit through it the end is part of the payoff. I highly recommend watching Campbell's musical performance with his daughter, Ally (Alexa Nisenson; Middle School: the Worst Years of my Life) at her school talent show more than once. It is a classic in the making.

The Blu-ray is presented in 1080p high definition video with a 1.78:1 aspect ratio. The colors are crisp and vibrant especially Principal Tyler's "pink" car. The DTS –HD Master 5.1 audio is clear and the dialogue is full through the center channels with a strong soundtrack undercutting the edges.

Unfortunately, the Blu-ray combo pack of Fist Fight is a little light on the extras with only two features. The first is a love letter to Georgia which seems to be obligatory now for every movie filmed in the state and the second is 15 minutes worth of deleted scenes which become a little bit overkill after awhile.

Ice Cube is his classic blend of mean guy mixed with humor and Day embraces his wimpy side while finding the inner strength to face off against Cube. Worth watching at least once.

For more information about Fist Fight visit the FlickDirect Movie Database. This release has been provided to FlickDirect for review purposes. For more reviews by Allison Rose please click here.

Judith Raymer
Ice Cube and Charlie Day capture the essence of educators that has been broken down by the system and the limitations placed upon instructors.
Full Review | Grade: A