The mostly young cast does a superb job of creating Perkin’s vision. While his dialogue is simplistic, the silences say just as much, if not more. Roberts’ subtle depiction of a mental patient is a sharp contrast to Shipka’s more overtly possessed performance. 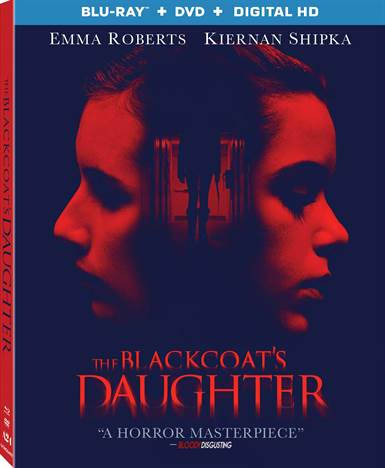 Purchase   DVD/Blu-ray/4K UHD
In 1960, Anthony Perkins introduced the world to Norman Bates, a serial killer wielding a knife. It became a classic in the world of horror films and set a standard of what scares us. Over Sixty years later, his son, Oz Perkins, made his writing and directorial debut with The Blackcoat's Daughter, a psychological thriller that pays a little bit of an homage to his dad' Psycho days. Premiering earlier this year, the movie garnered some critical praise for the novice director.

Kat (Kiernan Shipka; Mad Men) and Rose (Lucy Boynton; Sing Street) attend an all-girls, Christian boarding school in a rural area of the northeast. When school lets out for a week long break, the two are left with caregivers while they wait for their parents to arrive and hours turn into days. Unhappy to be stuck with a lowerclassman, Rose is annoyed until she sees Kat exhibiting some strange behavior. Unfortunately, she doesn't understand what is going on until it is too late.

Meanwhile, Joan (Emma Roberts; Nerve) is seen waiting at a bus stop by Bill (James Remar; Dexter) and his wife and offers her a ride out of the freezing cold weather. Ironically, the couple is heading to Portsmouth just passed the same town where the boarding school is located, and where Joan seems to be going. Along the way, Bill tells Joan she reminds him of their daughter who was killed and decapitated in Bramsford where wait for it…the school is located. Hmm… are we getting the "coincidence" here? As Joan gets closer to Bramsford, Kat's behavior becomes more erratic until both young ladies seem to become unhinged.

The mostly young cast does a superb job of creating Perkin's vision. While his dialogue is simplistic, the silences say just as much, if not more. Roberts' subtle depiction of a mental patient is a sharp contrast to Shipka's more overtly possessed performance. Boynton also contrasts Shipka nicely and Remar plays off of Roberts beautifully and vice versa. Casting is one of the things Perkins got right.

The cinematography is one of the other aspects of the film Perkins performed correctly. The remote and snowy location adds grittiness to the story that sets the scene beautifully. The cold, wintery haze has a 1970's feel to it that helps convey the sense of dreary foreshadowing that ultimately arrives. By isolating the girls and having Roberts' and Remar's characters riding towards the outskirts of a northeastern town, Perkins effectively creates an anticipation that plays into the suspense of the story.

Unfortunately, the outcome leaves the viewer perplexed and that is where the film falls apart. There is obviously some connection established between all of the characters but it is never explained, so the audience is left wondering and unsatisfied. Instead of fully fleshing out the story, Perkins ends with more questions than answers and left me scratching my head in utter confusion. Also, I have no idea why the film is titled The Blackcoat's Daughter, as there is no obvious connection between the title and any aspect of the plot.

The 1080p high definition video is clear despite the gloomy surroundings where the school is housed. The blacks are dark and deep and the muted colors are well defined. The DST-HD Master Audio 5.1 is crisp with the dialogue coming through clearly on the center channels. The haunting soundtrack by Perkins' brother, Elvis, only adds to the eeriness of the story and enhances a disturbing plot. The Blu-ray only offers two extras: Audio commentary with Writer/Director Osgood Perkins and The Dead of Winter: Making The Blackcoat's Daughter. Neither feature is earth-shattering, nor offers that much insight as to the unsolved mystery of how the characters are all interconnected.

Perkins offers a highly stylistic movie with strong direction, fabulous cast, and a great soundtrack but leaves the audience wanting more of an explanation at the ending. Perhaps, if you watch it you will find something I missed that explains it all.

Purchase a DVD/Blu-ray/4K UHD physical copy of The Blackcoat's Daughter today at Amazon.com

Download The Blackcoat's Daughter in Digital HD/4K from the iTunes store.

For more information about The Blackcoat's Daughter visit the FlickDirect Movie Database. This release has been provided to FlickDirect for review purposes. For more reviews by Allison Rose please click here.

The Blackcoat's Daughter images are © A24. All Rights Reserved.