Whether you are young or old,  The Lion King  is a wonderful film that deserves to be enjoyed over and over again. With better picture and audio quality, and new extras, any fans should pick up this latest version. 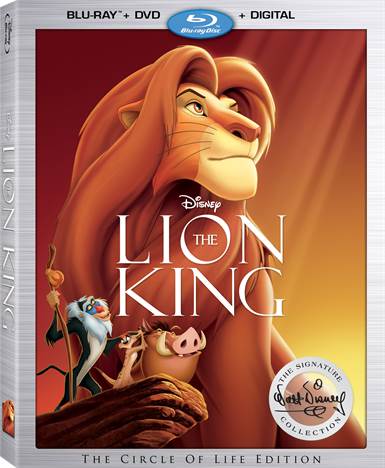 Purchase   DVD/Blu-ray/4K UHD
Disney animation has had a long and storied past.  From the original classics like Cinderella and Bambi to the newest film, Moana, Disney has produced exceptional movies with soundtracks that touch our lives.  For many years, there seemed to be a lull in Disney films but all that changed in 1989 with The Little Mermaid.  From then on, it has been one hit after another including Beauty and the Beast, Aladdin, and The Lion King through to Frozen and again, Moana.

Originally released in 1994, The Lion King became a huge success with an amazing Elton John/Time Rice soundtrack and while there have been other iterations, Disney is now releasing their Signature Collection/Circle of life Edition Blu-ray.

The story is based on the classic Shakespeare's Hamlet as told from the perspective of the animals in the African desert.  The film starts with the birth of the lion cub, Simba (Jonathan Taylor Thomas; Home Improvement and Matthew Broderick; Ferris Bueller's Day Off) and his proud father, Mustafa (James Earl Jones; Field of Dreams).  Precocious Simba is anxious to be independent and doesn't heed his father's warnings.  When Simba gets into trouble, Mustafa goes to save him only to fall to his death, albeit after being pushed by his jealous brother Scar (Jeremy Irons; Die Hard with a Vengeance).  Believing his father's death was all his fault, Simba runs away and Scar becomes the lion king in Simba's absence.

Simba lives the next several years roaming the jungle care free with his friends Timon (Nathan Lane; The Bird Cage) and Pumbaa (Ernie Sabella; Hill Street Blues) but must face his fears when he finds out Scar has ruined the kingdom and let the Hyenas take over.  Devastation and famine have plagued the land and the only way to reverse it for Simba to fight his uncle and take his rightful place as The Lion King.

A terrific story with a fabulous cast, great animation, and an amazing soundtrack is Disney's formula that seems to work time and time again.  The Lion King is no exception and has become a Disney classic in its own right.  Broderick, Jones, Lane, Sabella, and Irons along with Rowan Atkins (Bean), Whoopie Goldberg (Ghost), Cheech Maron (Nash Bridges) and Robert Guillame (Big Fish) are all fantastic and add so much to their characters.  Along with directors Roger Allers (Open Season) and Rob Minkoff (Stuart Little), they created an enduring story that delights fans of any age.

The Blu-ray is 1080p video quality with a 1.78:1 aspect ratio.  The picture is clear and free from any artifacting with vibrant red and yellows and lush greens. The audio is presented in DTS- HDMA 7.1 and is spectacular.  The soundtrack is as magnificent as when it was first heard in 1994 and the orchestration is almost magical (but isn't that part of what Disney is known for).

The combo pack includes a digital download and hours upon hours of extras.  While many of the extras are previously released on the Diamond and Platinum editions, they are worth watching over again.  There are interviews with cast, crew, producers and composers and so much material that is enjoyable, informative and fun.  There is also some additional material including an extended interview with Matthew Broderick and Nathan Lane, Visualizing a Villain which is a two-minute performance art piece, The recording sessions and inside the story room plus more.

With an African vibe that permeates the picture and the music, The Lion King is a masterpiece that became another fabulous Disney film that garnered well-deserved praise.  Whether you are young or old, it is a wonderful film that deserves to be enjoyed over and over again.   With better picture and audio quality, and new extras, any fans should pick up this latest version for the home video library.

For more information about The Lion King visit the FlickDirect Movie Database. This release has been provided to FlickDirect for review purposes. For more reviews by Allison Rose please click here.