This is a solid release and if you are a fan of American Horror Story or a horror completest, you should pick this up, at this price, it won’t feel like The Butcher chopped up your wallet. 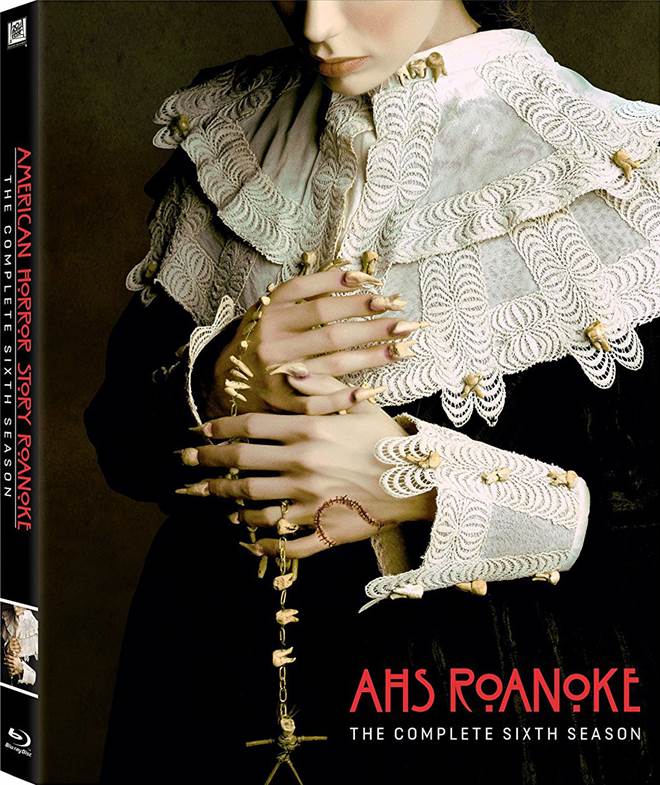 Purchase   DVD/Blu-ray/4K UHD
In case you're uncertain, American Horror Story is an anthology series centering on different characters and locations, including a house with a murderous past, an insane asylum, a witch, a freak show, a hotel, a possessed farmhouse and a cult. In season 6, AHS: Roanoke, we are taken on a wild, nightmarish ride through the backwoods of Virginia and the lost colony of Roanoke.

"Life imitates grisly reality TV in one of television's edgiest and most acclaimed shows ever! Told in gripping true-crime documentary style, "My Roanoke Nightmare" — this season's show within the show — chronicles shocking paranormal events. Hoping to begin a peaceful new life in a rustic North Carolina farmhouse, Shelby and Matt Miller (Emmy winner Sarah Paulson and Oscar winner Cuba Gooding Jr) flee Los Angeles, only to find murder, mayhem, and madness! From a girl ghost to a swine monster to murderous nurse sisters to a sadistic cult leader known as "The Butcher" (Oscar winner Kathy Bates), the couple's home is filled with nonstop terrors."

We are presented with a "Meta" production which sees the return of the repertory cast from previous seasons, including Cuba Gooding Jr., in what amounts to a "Reality Television" show, "My Roanoke Nightmare", within a show. It is a similar conceit as previous seasons, in that there is a haunted house and our players must confront theirs as well as the house's darkest secrets. However, the reality show reenacts the violent, paranormal events which took place to our main characters, all with a mid-season twist.

Going into this season, I must admit I was a bit uncertain since I was disappointed with the way Season 5, Hotel, fared during the later portion of the season, but I was open-minded enough to give 6 a try. I hadn't heard any details regarding the plot prior to its release, and I found out later that was by design, in this case, the secrecy worked in their favor. AHS: Roanoke, played well in spite of the usual tropes.

I haven't seen all of the seasons which preceded it, but Roanoke was off-the-rails gory, violent and genuinely creepy. At first, the switching between the actual persons and their actor counterparts was a bit confusing but once the story gets rolling and the claret begins to flow (gallons of it) it becomes familiar and you eventually settle into the pace. Unfortunately, that pace is interrupted at mid-season with an odd change for "My Roanoke Nightmare" where the show ends and then they attempt to revisit the success their producers had with a season two: "Return to Roanoke: 3 Days in Hell".  It gets convoluted and this breakeven ruins the pacing and, not to mention the tension, they created in the first half of season 6. While it didn't ruin the season for me, it certainly dropped it down a few notches.

What I will say, which holds true for each season, is that the acting from the entire cast is consistently excellent, they embody the roles and this season was no different. Kathy Bates (brilliant as Agnes Mary Winstead, portraying The Butcher), Cuba Gooding Jr., Sarah Paulson, Evan Peters, Denis O'Hare ( love him in Everything he does!), the list of fine actors is endless. Not to mention the unsettling, eerie splendor of the house as well as the forlorn setting of the dark woods, even the twisted neighbors, seemingly culled straight from a small town in west Texas, while perhaps a bit overdone, these cannibals really seem to add menace to a plot filled with its fair share.

Down to the specs.  American Horror Story: Roanoke is presented on Blu-ray courtesy of 20th Century Fox Home Entertainment with an AVC encoded 1080p transfer in 1.78:1. Each season seems to outdo the last in its look and feel and this season is no exception, especially during the presentations of the ghosts or the flashbacks to the lost colony. The scenes in this Blu-ray are vivid, lurid and most certainly deliver on the promise to frighten and even titillate.

The DTS-HD Master Audio 5.1 provides a clear soundstage and even delivers fantastic atmospherics, they take advantage of some scary fun sound effects, and even the music, creates a pervading sense of hopelessness and isolation. The dialog between characters all seem to be pretty straightforward, but it's never lost and the mix is pretty clear throughout.

All in all, this is a solid, albeit a tad thin on extras, release, and if you are a fan of American Horror Story or a horror completest, you should pick this up, at this price, it won't feel like The Butcher chopped up your wallet.

For more information about American Horror Story visit the FlickDirect Movie Database. This release has been provided to FlickDirect for review purposes. For more reviews by Leonard Buccellato please click here.