American Horror Story is on my top shelf of best horror, should I say more? 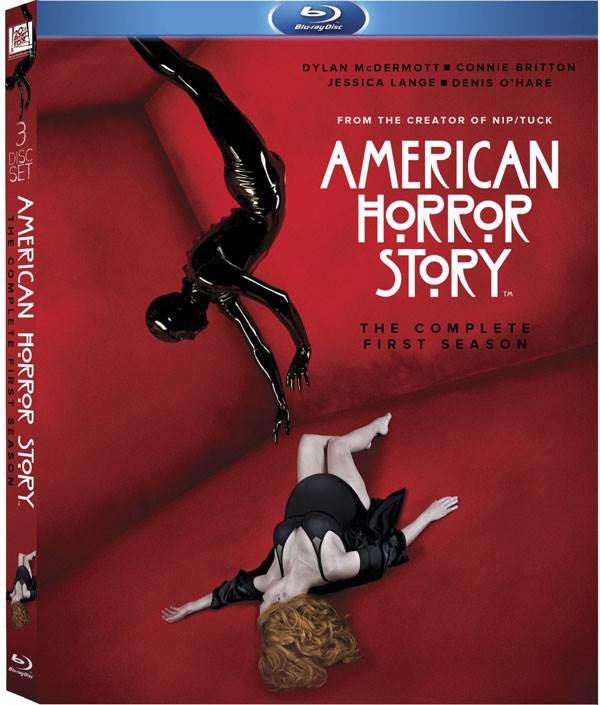 Purchase   DVD/Blu-ray/4K UHD
Whether you are a horror fan or just like a mystery with a lot of gruesome characters American Horror Story: The Complete First Season has been released on Blu-ray and DVD and it's a creepy feast.  Unlike most other TV series, the show completes the story at the end of the season so it's all in 12 episodes in a 3-disc set.  Nominated for several Emmy awards, actress Jessica Lange won for Best Supporting Actress in a Miniseries.  The new series starts October 17th with a completely different storyline and all new characters.

Like most horror stories, this one has a creepy house, monsters, ghosts, dangerous intruders and an ordinary family who has just moved into the abode.  If you were to write the word wicked on a sheet of paper and put all the things that come to mind below it, you will most likely see an episode reflecting your thoughts on the adjective.  One of the benefits of watching this miniseries on your Blu-ray player is that there are no interruptions unless you want to press pause. Each episode gets delivered as if it were a continuing movie to the very last scene some 500 plus minutes later.

About the horror series:

The story centers on the Harmon family, Dr. Ben (Dylan McDermott) and his wife Vivien (Connie Britton) with their daughter Violet (Taissa Farmiga) who have just moved into a 1920's Victorian house in Los Angeles.  Newly arrived from Boston, Mass, the Harmon's are starting a new life after leaving behind Ben's affair with one of his psychology students. Still reeling from the issues surrounding the situation and recently delivering a stillborn child, Vivien has tried to convince herself to make the best of a fresh start.  Their daughter Violet suffers from low self esteem with periods of gloom.

The house they purchased has been occupied by many families throughout the years, most of which have left ghosts behind before moving on to another life.  As episodes spool out we are introduced to many a ghost and even some creatures that are not very pleasant.  One in particular, a house maid (Alexandra Breckenridge) appears only to Ben and her sexual appetite has become an opportunity for him to release some of his pent up desires.

The neighborhood isn't very friendly except for one house across the street from the Harmon's where Constance Langdon (Jessica Lange) lives.  Incredibly nosy the elder matron takes leave at showing up at the oddest times, especially since her dead son Tate Langdon (Evan Peters) has become a friend to Violet.  As the season progresses we are ‘treated' to some very wicked happenings from blackmailing intruders, a strict House Keeper (Frances Conroy), violent murders and many other situations that make the horror show shocking.

While the miniseries is why you should get the Blu-ray or DVD there are other distractions that are added fun.

Special bonuses on the Blu-ray include:

The Pilot has commentary director/writer Ryan Murphy who adds some of his ‘cliff notes' to the first episode.  You may want to watch the beginning of the series with Ryan in the background, especially if you feel you missed anything about the characters.
"The Murder House: Presented by Eternal Darkness Tours of Hollywood"- this is a fun watch as you will find out about most all of the previous occupants in the old Victorian house. It's a must after you have seen the series.
"Behind the Fright: The Making of AMERICAN HORROR STORY" has all the usual background in the production and worth a watch.
"Overture to Horror" Creating the Title Sequence" – it's a look at the making of the interesting opening credits.
"Out of the Shadows: Meet the House Ghosts" -  here you will find interviews with the many murderous ghosts and other demons.

The Video Quality of American Horror Story on Blu-ray played on my HD Television has an extremely good presentation of all the things that make a horror flick terrifying including gloomy sets, bloody scenes and sinister surprises.  The 1.78:1 format fits perfectly on my 16x9 widescreen with no black stripe top and bottom. Note: Like most TV shows adapted to Blu-ray, if it doesn't play right, you may have to upgrade your Blu-ray player one time by going to your manufacturer's website for instructions or follow the information on the pop-up that indicates it on your Blu-ray disc.

The Sound Quality depends on your television and the player you are using.  Played on my Blu-ray using the provided DTS-HD Master Audio 5.1 the quality coming through my television surround speakers gets quite amazing.  Perfect for a late night showing of the creepy show, I found myself looking behind me once or twice.

The music track of the show provides a perfect eerie flavor.  I liked the opening sequence of the Pilot with "Tonight You Belong To Me" sung by Patience and Prudence while the twins are walking into the old Victorian house on their way to meeting their maker.   Nicely used songs and spine-chilling music throughout make this miniseries a horror lover's delight.

American Horror Story has been rated TV-MA and contains violence, gore, language, sexuality and brutality.  Please be cautious when playing your Blu-ray of this title around immature children.

FINAL ANALYSIS: It's on my top shelf of best horror, should I say more? (A)

For more information about American Horror Story visit the FlickDirect Movie Database. This release has been provided to FlickDirect for review purposes. For more reviews by John Delia please click here.