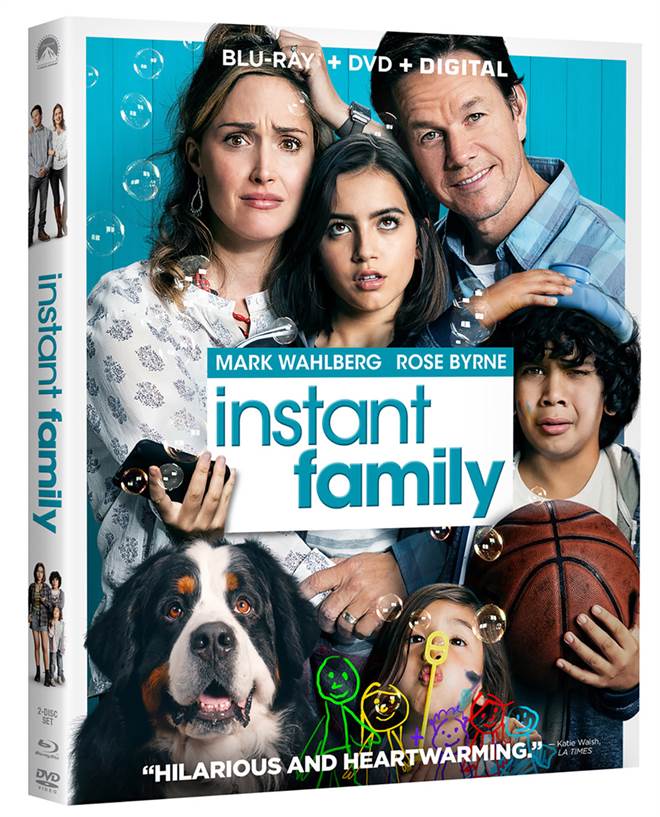 Purchase   DVD/Blu-ray/4K UHD
Instant Family, based on the true story of writer/director Sean Anders (Daddy's Home), tells the story of Pete (Mark Wahlberg; Ted) and Ellie (Rose Byrne; Neighbors), a couple who, even though they love each other and work hard, decide that children would make their lives complete. However, they seem to get more than they bargained for when they sign up to be foster parents.

After doing the classes and background checks they go to a foster "fair" and meet Lizzy (Isabela Moner; Transformers: The Last Knight). They decide to foster her but learn that she also has two younger siblings, Juan (Gustavo Quiroz; Peppermint) and Lita (Julianna Gamiz; Jane the Virgin). The childless couple becomes a family of five in what seems like a blink of an eye and now they must try to figure out their new life and their new normal.

With Anders and Walberg teaming up again after the Daddy's Home films one would be quick to think this is just another slapstick goofy comedy. However, nothing could be further from the truth, as Instant Family is a drama that is disguised as a comedy. The film, based on the experiences director Sean Anders went through, tell a heartwarming tale of finding the family you didn't think you really wanted or needed.

It was truly interesting seeing some of the inner workings of the foster care system. It seems to offer a view of the good, the bad and the ugly.  Some of the experiences echoed some things that have happened in my life so I know there is some truth behind the story, and by the end of the film, I was a mess, crying my eyes out.

Wahlberg and Byrne are veterans of this type of film, but the real stars of the movie are the three children, Isabela Moner, Gustavo Quiroz, and Julianna Gamiz. Moner has truly taken her acting to the next level with this film as well as Sicario: Day of the Soldado. It is light years from her performance with Wahlberg in Transformers: The Last Night. With her portraying Lizzy, you truly feel all the emotions that she has had to go through in life and the emotional struggle she is now in. In a few years, she is going to be one of Hollywood's hottest stars. Quiroz and Gamiz were both equally adorable and cute in the film, and while they are still new to acting one easily believes the emotions they were trying to convey on screen.

Encoded in 1080p AVC Instant Family is presented in its original 2.40:1 aspect ratio. Colors are bright and vibrant and blacks are true. There are zero signs of artifcating that can be found in this transfer. In general, it is almost exactly like the source material that I saw in the theater. Complimenting the video is a lossless DTS-HD 7.1 soundtrack. The audio is very front-loaded as it should be for a dialog focused film, however ambient sounds still can be heard through the rear speakers. There isn't actually that much, but then again the film isn't loaded in special effects and is more about the interactions between everyone so it fits perfectly.

Aside from the Blu-ray, The Instant Family combo pack contains a DVD, and a Digital HD copy to redeem on either iTunes or Vudu. It also contains Deleted & Extended Scene, a gag reel, a music video by actress/singer Isabela Moner, five featurettes on the making of the film itself (including a proposal on set!), and a few dealing with the issues of foster care and adoption itself. The latter also dives into Director Sean Anders' family who was the inspiration behind the film.

Mark Wahlberg and Rose Byrne have a had a long history making slapstick comedy, however, if you quickly dismiss Instant Family as this type of film and miss seeing it you would be sorely mistaken. Instant Family has heart and is a wonderful story about the best in people. It is a must see for the entire family.

For more information about Instant Family visit the FlickDirect Movie Database. This release has been provided to FlickDirect for review purposes. For more reviews by Nathan M Rose please click here.

Allison Rose
Instant Family is a feel-good film during the holiday season and one that should be seen by everyone as it might just start a much-needed dialogue.
Full Review | Grade: B