When Pete (Mark Wahlberg) and Ellie (Rose Byrne) decide to start a family, they stumble into the world of foster care adoption. They hope to take in one small child but when they meet three siblings, including a rebellious 15 year old girl (Isabela Moner), they find themselves speeding from zero to three kids overnight. Now, Pete and Ellie must hilariously try to learn the ropes of instant parenthood in the hopes of becoming a family. INSTANT FAMILY is inspired by the real events from the life of writer/director Sean Anders and also stars Octavia Spencer, Tig Notaro and Margo Martindale.

Download Instant Family in Digital HD/4K from the iTunes store.

Listen to the Instant Family soundtrack on Apple Music. 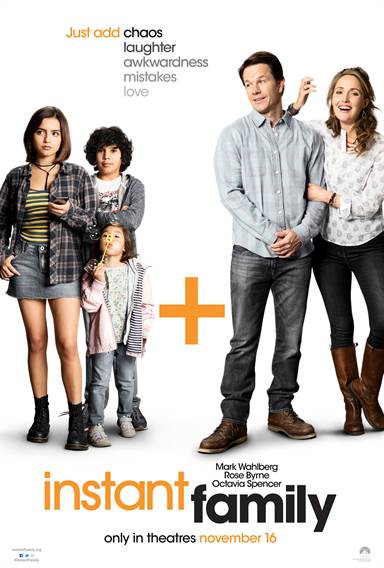 The old saying goes… you can pick your friends and you can pick your nose but you can't pick your family?  But what if you could?  Well for some people that is exactly what happens.  On average there are over 400,000 children in foster care each year and of the 135,000 children are adopted each year, 59% come from the foster systems so, in fact, there are people who can and do pick their family.  Based on the true story of writer/director Sean Anders (Daddy's Home), Instant Family is about three children who go to live with a childless, married couple and how they eventually become a family.

Pete (Mark Wahlberg; Ted) and Ellie (Rose Byrne; Neighbors) are a childless, married couple who work hard but are beginning to wonder if something is missing in their lives.  After a little bug is planted in their heads they decide to become foster parents.  They go through a thorough background check and 8 weeks of classes before they can even consider fostering.  They have an idea of what type of child they want to foster but that changes when they go to a foster "fair" and interact with a teenage named Lizzy (Isabela Moner; Transformers; The Last Knight).

When they decide to foster Lizzy they soon find out that she has two younger siblings, Juan (Gustavo Quiroz; Peppermint) and Lita (Julianna Gamiz; Jane the Virgin) and suddenly they go from suburban DINKS (dual income no kids) to a family of five.  Of course, things don't go as smoothly as Pete and Ellie imagined they would – especially with a moody teenager in the house -  and makes them rethink the whole idea of fostering.  However, after some trials and tribulations and a few funny moments, the new found family learn to navigate the waters they have swam into and learn a few things about themselves and about the idea of family.

Wahlberg and Byrne once again prove why they are terrific choices for a comedy film.  Their timing is excellent and in this case, their blend of sincerity mixed with utter cluelessness make Pete and Ellie real and believable.  They make a great team and I hope they work together again in the future.  The kids are also well cast Moner again shows why it is up and coming in this industry.  Honorable mention also needs to go to Octavia Spencer (Hidden Figures) as their caseworker, Julie Hagerty (Airplane!) and Margo Martindale (August: Osage County) and Ellie and Pete's Mothers.

While this is a fairly familiar movie formula the cast makes it more special than it normally might be.  The script also offers above-average dialogue making for some funny scenarios and for some truly heartwarming moments.  The premise gives a glimpse into what fostering and adoption can really be like for those of us who have no idea and makes one want to sympathize with those unique individuals who do it for real.  The group therapy sessions also prove that even though people who foster/adopt go through similar situations and feelings no two experiences are the same.

While Instant Family is a heartwarming movie, it also may deter people from fostering as it does show the less glamorous side of the system and the challenges people face.  It also makes one appreciate these special individuals who open their hearts and homes to the innocent kids thrown into a flawed system due to no fault of their own.  It is a feel-good film during the holiday season and one that should be seen by everyone as it might just start a much-needed dialogue.