Home / Reviews / Jumanji: The Next Level

Jumanji: The Next Level Blu-ray Review

Packed with comedy and action, “Jumanji: The Next Level” is a rousing good time. It’s great escapist material. Go get it today. You won’t be disappointed. 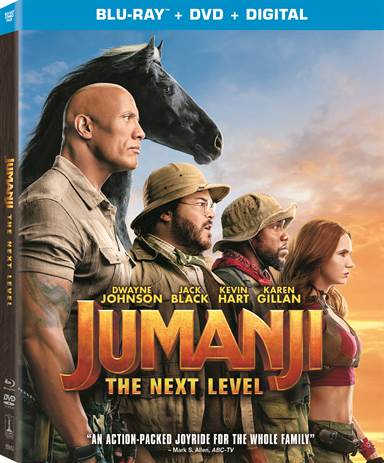 Can you hear the drums beating? Is your pulse racing? Are you slowly being drawn molecule by molecule into another universe? The answer is yes and you're off on another adventure inside the mysterious game called "Jumanji". The question is will you survive long enough to solve another quest and get back out?!

Jumanji is back and it has added a whole new level of fun, laughter, and excitement. The same gang reluctantly returns to play and they've picked up a few new players along the way to make the action even funnier than in the last film. As sequels go, this one is as good as it gets, maybe even better than that.

If you grew up loving the mid-1990s Robin Williams' version of Jumanji, directed by Joe Johnston and based on the 32 page Chris Van Allsburg children's book, it's time to let that film go and finally visit this new universe. Just take a leap inside the game and open your hearts and minds to this new fantastical world of confusing avatars and their crazy antics. You won't regret it.

When a slightly depressed Spencer (Wolff) goes back into the Jumanji, the world's most dangerous game, his pals Martha (Turner), Fridge (Ser' Darius) and Bethany (Iseman) re-enter the game to find him and bring him home. However, nothing is as they expected.

The game has changed and they have accidentally brought along Spencer's crotchety grandfather Eddie (DeVito) and his long lost buddy Milo (Glover). Now the real fun begins as they find themselves scrambled in their Avatar bodies (Johnson, Black, Hart, Gillian), each occupying a different one than in the last adventure. Add to that every danger and obstacle you could possibly imagine as they traverse unknown lands, from the arid deserts to the snowy mountains, all while searching for Spencer and bitching and complaining every step of the way.

Returning Director Jake Kasden has done a great job making a very funny film that stands on its own, you don't have to have seen the original to get caught up in the action.

The returning cast members are all equally fun to watch, with each crazy personality adding to the overall Chaos. I particularly enjoyed Dwayne Johnson and cast imitating DeVito's voice and mannerisms as they changed bodies. The film is just a good time, loaded with sight gags, personality clashes, and heroic derring-do.

Since the film was shot digitally, the transfer is well done and the video quality is sharp and clean.  CG work isn't overtly obvious and colors pop.  The video is only surpassed by the DTS-HD, Master audio 5.1.  Ambient noises of the jungle and desert are crisp and add a layer to viewing enjoyment.  The blend of sounds and dialogue are well done and one doesn't overpower the other.

While there are a number of extras on the Blu-ray, most are very short in length and don't have an abundance of information about the film. They include: Gag Reel, Body Swapping: Snapping into Character, Back Together: Reuniting the Cast, Level Up: Making Jumanji: The Next Level, Creating the Scene, Rhys Darby Wants to Jingle, Awkwafina Cat Burglar, NPC Confessions: Jurgen the Brutal, Grow Up, Telenovela,  Trick or Treat, and Select Scene Pre-Vis.

My take…Packed with comedy and action, "Jumanji: The Next Level" is a rousing good time. It's great escapist material. Go get it today. You won't be disappointed.

The Next Level" is Rated PG-13 for adventure action, suggestive content and some language. Running Time: 2hr. 3min.

Purchase a DVD/Blu-ray/4K UHD physical copy of Jumanji: The Next Level today at Amazon.com

Download Jumanji: The Next Level in Digital HD/4K from the iTunes store.

Listen to the Jumanji: The Next Level soundtrack on Apple Music.

For more information about Jumanji: The Next Level visit the FlickDirect Movie Database.

Read More Reviews For Jumanji: The Next Level