London and Lee expertly lead this cast of “misfit toys” in an appropriate follow up to Smith’s debut, Clerks. 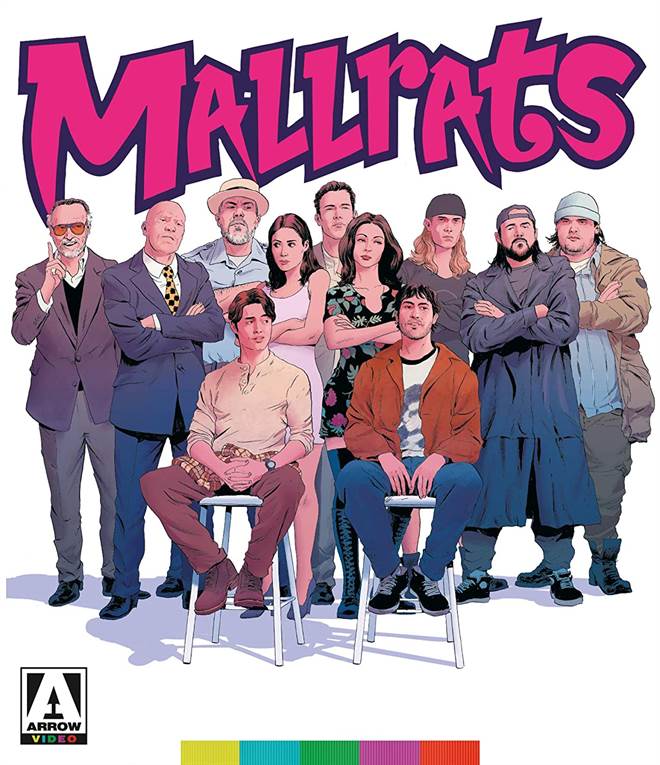 Kevin Patrick Smith (Clerks) was born and raised fifteen minutes from me in Monmouth County, New Jersey, and is a mere six months older than me (yet abundantly more financially successful).  When his first feature film debuted at the Sundance Film Festival, won two awards and later screened at the Cannes International Film Festival, where it captured the attention of Miramax boss, Harvey Weinstein (The Hateful Eight – Executive Producer).  One year later, Smith's second film, Mallrats, while not as successful as Clerks, still made a good return on its investment.  For the twenty-fifth anniversary, Arrow Video has created a limited-edition Blu-ray set, which is in stores now.

T.S. Quint (Jeremy London; Journey to the Center of the Earth) and Brandi Svenning (Claire Forlani; Meet Joe Black) have been dating for quite some time and planned a trip to Orlando, Florida where T.S. was going to propose.  However, at the last minute, Brandi tells T.S. she can't go because she has to fill in for a recently deceased contest on her dad's dating game show, Truth or Date.  This change in plans has T.S. understandably upset causing the two to argue and eventually break up.  At the same time T.S.'s best friend, Brodie (Jason Lee; My Name is Earl) gets dumped by his girlfriend Rene (Shannen Doherty; Charmed) so the two guys decide to find comfort at the local mall.

Ironically, Truth or Dare is being filmed at the same mall, and Rene's new boyfriend, Shannon Hamilton (Ben Affleck; Justice League) works as a store manager there.  T.S. and Brodie, with the help of Jay (Jason Mewes; Clerks) and Silent Bob (Smith), plan to sabotage the game show and reveal Shannon for the jerk he is in order to win back their girlfriends.  Of course, mishaps and hilarity ensue while in the midst of an unnamed Mall in New Jersey.

London and Lee expertly lead this cast of "misfit toys" in an appropriate follow up to Smith's debut, Clerks.  Shannen and Affleck show some real talent even this early in their careers and Forlani fits in with this group well making their relationships believable.  Of course, Mewes and Smith bring the comic relief, which is what makes Mallrats special as opposed to just another teen, "coming of age" story.  Honestly, I doubt the movie would be as interest or successful without their hijinks.

Arrow Video does such a wonderful job with their restorations and combo packs of previously released films that, in almost every instance, I would recommend their products.  In this case, Arrow used the original 35mm camera negative, which was scanned in 4K resolution.  This leads the graininess to become more apparent but also offers the viewer better tonal qualities throughout the film.  The DTS-HD Master Audio 5.1 is a solid track that showcases the dialogue while offering some interesting ambient noises. Besides the theatrical cut, extended cut, and the television cut, this set comes with the following extras:

While not as successful as Smith's debut film, Clerks, Mallrats once again showcases his upbringing in New Jersey in the '80s offering a snapshot of that portion of young adults in the country at that time.  Arrow Video once again offers a restored film set with lots to enjoy including hours of extras and three versions of the film itself.  It's a perfect holiday gift for any Smith fan or a walk down memory lane if you happened to be a teenager in Central New Jersey in the 1980s

For more information about Mallrats visit the FlickDirect Movie Database. This release has been provided to FlickDirect for review purposes. For more reviews by Allison Rose please click here.