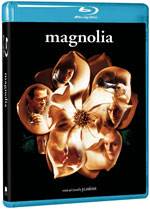 Purchase   DVD/Blu-ray/4K UHD
Paul Thomas Anderson's epic, Magnolia features an ensemble cast (Tom Cruise, William H. Macy, Julianne Moore, and others) who share interlocking lives in a Byzantine plot. Magnolia takes 188 minutes to be delivered, and ends in a wholly unexplained rain of frogs which interferes in the lives and deaths of some characters. It also comes just before a somewhat uneasy end of the movie that leaves lots of things unresolved and a few things maybe a little hopeful.

I had missed it originally, and when I got the Blu-Ray eleven years after its debut, I was curious to see how well it would have aged. I assumed since I knew it was a complex story line that by paying close attention, I could understand what Anderson intended. Having seen some later movies like Crash or Traffic which use the same technique to build to a crescendo, I figured that perhaps the rain of frogs would represent biblical judgment. Indeed, research shows that the rain of frogs is heralded by the number 82 which apparently appears in the film and represents Exodus 8:2 -- which discuss a rain of frogs!

Alas, even with a handy, map-guide from Wikipeda to show the various characters and relationships, the knowledge that the frogs have, indeed, represent the judgment of God; although I missed the number 82 in the film, and really, going from the number 82 to "frogs" is pretty much an elastic-girl feat of stretching anyway. I was unable to figure out what the movie was trying to accomplish. This is not to say I am wholly ignorant -- careful watching gives me clear themes of regret, children at odds with adults, and the way we get in the way of our own desire for closeness. This plays out over and over with its somewhat intertwined cast in much the same way that a 3-card Monte-dealer will shuffle his cards and once in a while show you something so you think you're following it.

I am still not clear about what the beginning suicide/homicide had to do with the rest of the story. I am unclear, and perhaps I missed it, as to what the cop's missing gun-arc accomplished. I am not sure if Macy's character's judgment since he now needs the oral surgery he wanted earlier but didn't need previously has made him happier or not -- the movie doesn't tell us. It also doesn't tell us if the aborted suicide at the end becomes an accidental death when the TV catches on fire; answer: yes, in cut scenes, we know it did.

Mostly, I'm not sure why we needed to spend 188 minutes watching it.

If you have not seen Magnolia, then the things I have told you so far probably leave you baffled. If you have seen it, although you know what I am talking about, I think there is a reasonable chance you are no less baffled. To say the movie is complex or challenging is probably correct, and it certainly isn't sloppily made; but it does something that I don't understand -- it gives us an ending that I believe is supposed to be a wrap but doesn't work as a resolution.

Ultimately, it is an uneven piece of work; individual parts of it are gripping. Tom Cruise's acting is a bit genius as a self-help guru who teaches men how to "seduce and destroy" women -- which rightly won him best supporting actor. The game-show elements are a fascinating bit of movie-making; I wish they would have done more with them. William Macy shows that he is the elementally iconic put-upon guy who thinks life has given him a raw deal, although he has really done it to himself. I am not sure he is type-cast so much as he is just "that guy".

That said, the Blu-Ray treatment doesn't do a lot for Magnolia, and the extras lack the director's commentary that would really make the disc crackle. The Making-Of extra is good, candid, and deep; but if you wanted insight into what the story-like commentary could give you -- it isn't there. The Seduce and Destroy stuff (4 minutes of seminar, about 2 minutes of infomercial) is nice. It hits all of the right notes as a how-to-pick-up-women sales pitch. The Save Me music video shows us that all that Amiee Mann music wasn't coincidental.

However, over all, while Magnolia is well loved by a lot of people, has won enough awards to ensure that it is good enough, and looks and sounds fine in the Blu-Ray format, I feel that this edition is sufficiently lacking in new material. It is apparent that this is all stuff from the DVD release, and does not warrant a top grade. I think that a decade later this sort of thing has been done more satisfyingly, and the 188-minute-runtime feels indulgent to me. If the release had had some really compelling extras, I would have given it a higher score; but as it stands, I just can't.

For more information about Magnolia visit the FlickDirect Movie Database. This release has been provided to FlickDirect for review purposes. For more reviews by Marco Chacon please click here.