Tron was a fun and entertaining film that has garnered millions of fans over the years, now that it is on Blu-ray it can entertain new generations of fans all over again. 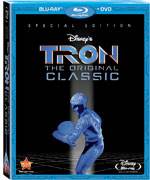 When the original Tron film hit theaters back in the early 1980's it didn't become the box office smash everyone had hoped for. Instead, it got poor reviews and did not do well with major audiences. But it did garner a fan following, mostly from young children who were just entering the world of video gaming. Over the years as those children grew up, the film's following grew and grew, developing into what is known as a "cult" following.

The film starred a young Jeff Bridges as Kevin Flynn, a hot-shot computer programmer who loses his job at a software company when a devious fellow employee by the name of Ed Dillinger (David Warner) hacks his computer and steals some new video game ideas he has been developing. Dillinger presents these games to the company as his own and has Flynn fired to keep his crime a secret. Now Kevin is working at a video arcade making very little money while advertising the very games he had developed. At the same time Flynn's friends and current employees of ENCOM, the company Kevin used to work for, are developing a new type of hardware that allows them to digitize a physical object and place it inside a computer.

Anyone can guess where this little plot development will lead. With some help from his friends, Alan and Lora (Bruce Boxleitner and Cindy Morgan) they break into ENCOM so that Kevin can hack into the computer system to retrieve the evidence he needs to prove his innocence. As he is doing so, the security system for ENCOM, dubbed the Master Control Program or MCP, is aware of what Flynn is attempting and utilizes the digitation device to send Flynn into the game grid where he can prevent him from retrieving the data.

At this point the film almost becomes like The Wizard of Oz, Kevin is unaware of how he got into the grid nor does he believe what he is seeing. While in there he bumps into some familiar faces like Alan, who now goes by the name of Tron and is a security program developed by Alan fighting within the system against the MCP. Kevin is forced to take part in the games run by the MCP's lieutenant, a program by the name of Sark. After a bit of a rough start, Flynn takes control of the situation joining Tron to escape the hold of the MCP. This takes place during the very famous light cycle race in which the main characters compete in vehicles similar to motorcycles only made of light and emitting a jet wall behind them that they can use to destroy their opponent.

As they make their escape into the free realm away from the MCP they are separated from one another; Tron heads off to the control tower where he joins up with Yori, another computer program. Meanwhile, Kevin infiltrates the MCP's fortress and reunites with Tron. As the trio makes their way to the MCP's control tower a final showdown takes place between Tron and Sark, while Flynn distracts the MCP long enough for Tron to deliver the final blow. For video game fans and computer fans alike, the film did more than just tell a fun story; it predicted the future, not only for gaming but for computer programming as well.

Of course, once DVD and Blu-ray became popular it wasn't long before Tron made its way there as well. Given the level of special effects in the film, being transferred to Blu-ray only makes the film more stunning to look at. With the two-disc collection comes a large number of extras for hardcore fans. On disc one there is the Blu-ray version of the film, an extensive documentary on the making of the film, deleted scenes introduced by Bruce Boxleitner, a photo gallery, and audio commentary with Steven Lisberger, Donald Kushner, Harrison Ellenshaw, and Richard Taylor. There is also storyboard work showcasing the light cycle race, storyboard-to-film comparisons, and interactive internet fact lookup features. Disc two features the standard version of the film along with some similar features on disc one.

Tron was a fun and entertaining film that has garnered millions of fans over the years, now that it is on Blu-ray it can entertain new generations of fans all over again.

For more information about Tron visit the FlickDirect Movie Database. This release has been provided to FlickDirect for review purposes. For more reviews by Chris Rebholz please click here.