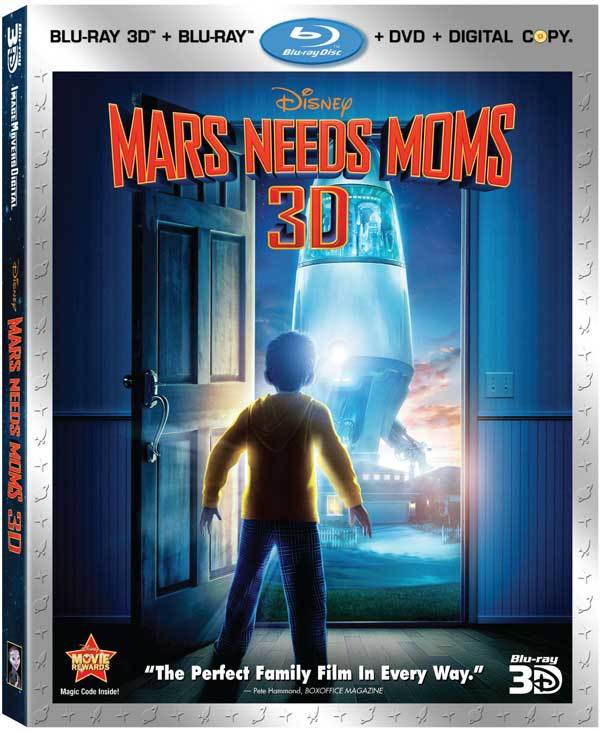 Purchase   DVD/Blu-ray/4K UHD
The latest and probably last feature from Imagemovers Digital (Polar Express, A Christmas Carol) is the home release of Mars Needs Moms in an amazing value combo pack.  Imagemovers specialized in performance capture CGI - animating the characters over digitally captured wireframes of the actors themselves acting out the movie (more on that later)
Mars Needs Moms is based on the childrens' book of the same name by Berkeley Breathed.  The lead character, Milo (acted by Seth Green, voiced by Seth Dusky), does not listen too well to his mother and wishes that he didn't have one.  At the same time, Martians have identified his mother (portrayed by Joan Cusack) as someone they need for their quartocentennial childrearing.  Needless to say, Milo catches them in the act and our adventure begins.
Unfortunately I think the movie didn't really capture the short essence of the original book and wasn't able to capture the necessary emotions to really draw people in, which could explain the lackluster performance during its' theatrical run.  Gribble, another human trapped on Mars (portrayed by Dan Fogler, Take Me Home Tonight) has a non-linear character development which I believe drew away from the main story.  However, if you watch the deleted scenes it seems to flow better.  Additionally, the uncanny valley with the human actors is evident and makes it hard to fully concentrate on the story line.   It is because of these shortcomings that this disc does not get a higher grade.
Because this movie is another "must-have" for anyone with a 3D TV.  While a few of the traditional 3D gags are used, the increased depth of field with the beautiful backgrounds  and the crisp clear details are what makes this movie shine when viewed in 3D.  It starts with the opening credits and doesn't stop wowing.  Couple that with the as-expected digital sound from Blu-Ray and you have a wonderful home entertainment experience, provided you look past the story flaws and lack of good character development as presented, and watch it as just entertainment.
The discs, mainly on the 2D Blu-Ray, include several special features, of which the "must-see" has to be the deleted scenes.  Like with A Christmas Carol, they include whatever footage they have - from completed sans face animation to the raw performance capture footage.  It is the raw capture footage where you get to see Dan Fogler shine as an actor - he is acting on a white soundstage with minimal props while not only imagining how to say his lines but how to interact with a scene that will be added later digitally.  Watch his facial expressions and how he moves around, plus think of how this adds to his character in the movie.  Personally I think they should have found a way to include him a little more in the story and perhaps it would have flowed better.
Cast:
Directed By:
MPAA Rating: PG

For more information about Mars Needs Moms visit the FlickDirect Movie Database. This release has been provided to FlickDirect for review purposes. For more reviews by Roger Longenbach please click here.