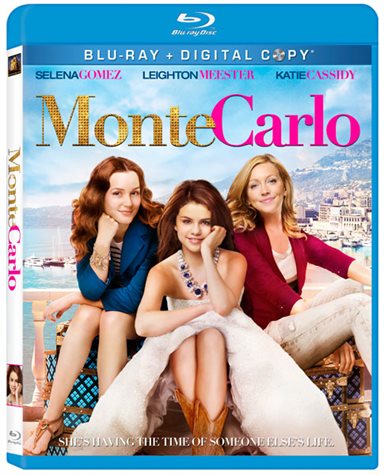 Purchase  DVD/Blu-ray/4K UHD
Selena Gomez breaks away from her role of Alex on Disney Channel's Wizards of Waverly Place in order to star in a new film by Thomas Bezucha (The Other Stone), entitled Monte Carlo -- alongside Katie Cassidy (Nightmare on Elm Street, Supernatural) and Leighton Meester (Gossip Girl).
Monte Carlo is the story of three young girls from Texas who journey together to Paris to have a vacation of a lifetime.  However, a few mishaps occur along the way.  The girls find themselves stranded in the city of love without their baggage or their guided tour.  As the girls are about to give up and go home, they are presented with an opportunity of a lifetime after a case of mistaken identity.
While most "family-friendly" pictures nowadays follow a cookie-cutter formula, it is refreshing to see a film such as this hitting the silver screen and now the home entertainment market.  Loosely-based on the novel, Headhunters, by Jules Bass, Thomas Bezucha, it provides a refreshing take on a "rite of passage" teenage, European trip that has been not been updated since the likes of Eurotrip in 2004; although the later was geared more towards a mature audience.  Thomas Bezucha and company create a film that is appropriate for a true, family friendly group.
While Selena Gomez has been in front of the camera for most of her life, her talent has not really shined through until this film. Gomez is on top of her game playing a duel role in this film that demonstrates she is ready to move from kid-friendly fare to adult films when the time is right.  Gomez, along with the other leads (Cassidy and Meester), play off each other perfectly; and it is easy to believe that the three and truly sisters/longtime friends, along with a supporting cast, holds its own.  This film makes for a great viewing experience.
Monte Carlo is encoded with the latest AVC codec and boasts and surprisingly rich DTS-MA soundtrack that fills the room with the sounds of Europe.  While the picture quality will not win any awards, it is on par with most releases these days -- without any artifacting and reasonable noise reduction.  As with most Blu-ray releases, these days Monte Carlo comes with the standard fluff behind the scenes, pieces that span 5-10 minutes each, deleted scenes, and a Digital copy of the film to take with you on the go.
This fall, if the fall weather is finding your family stuck in-doors, could not find a better film to spend your family night together than Monte Carlo.  It is fun, witty, and entertainment the entire family can enjoy!

Download Monte Carlo in Digital HD/4K from the iTunes store.