I give Magic Mike a half star for Tatum’s moves. 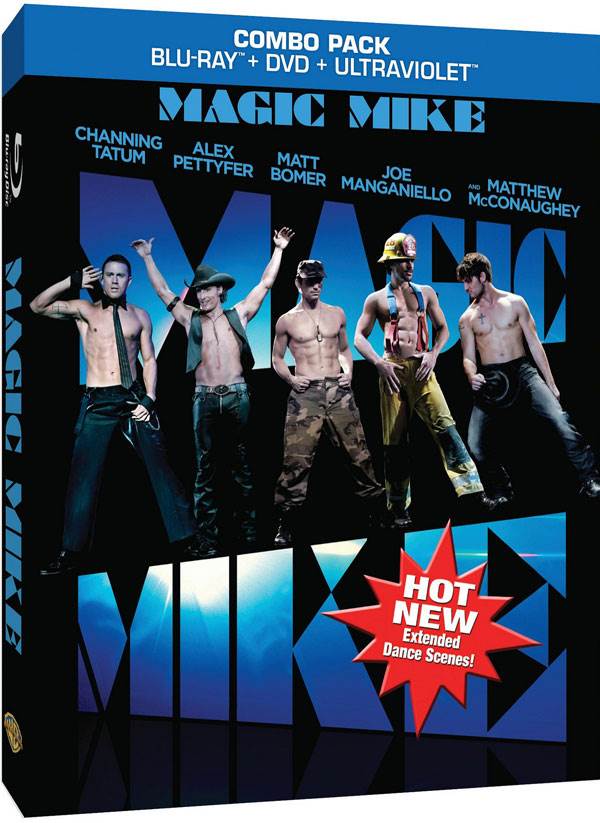 No cover charge and no stack of singles are needed.

This week Warner Brothers releases Steven Soderbergh's latest hit "Magic Mike" on Blu-ray to a local store near you. If you don't know about "Magic Mike" and its six-pack abed cast let me give you a quick idea of what this film is all about.

Six men dance and strip down to almost nothing.

Now most women out there that have seen it already would probably complain that wasn't enough, or they would like to see more. But even some of the women I know, that have seen "Magic Mike" have admitted this film has no real plot or story of any interest and that didn't bother them at all. They weren't interested in it "for the articles", they were there for the Abs and dancing, and that was good enough for them, until "Magic Mike 2."

"Magic Mike" is basically about Mike (played by Channing Tatum) who loves to make furniture, has a detailing business, and does construction on the side. But that's not enough, He's a stripper at "Xquisite", a strip club in downtown Tampa.
Mike, while on a construction job, meets Adam who he introduces to the world of fast cash stripping. After meeting Adam's sister Brooke, Mike ends up falling for her and wants her no matter what the cost. There's dancing, conflict, dancing, boring acting, more dancing, and a few funny lines sporadically placed.

In the beginning, Matthew McConaughey quips "I think I see a lot of lawbreakers and I don't see a cop in sight" which explains how Steven Soderbergh can get away with releasing such a weak story. The story is so uninteresting and boring that even my girl was talking through the dialogue and wanted the dancing to start up again. Soderbergh once again uses techniques that are quite irritating, and though they have become staples in his other films doesn't make them less annoying. Every scene shot outside the strip club has a yellow tint to the scenes, making everyone look jaundiced and if that wasn't enough he shifts from scene to scene by allowing the vocals from the upcoming scene overlap the pictures from the previous scene. If that didn't annoy you enough, the dance scenes were cut up and edited into pieces. Yes, he even took the main thing women wanted to see the most and cut them up for reasons unknown.

The brightest part of this film was the dancing of Channing Tatum. Tyler Gage hasn't lost a dance move since "Step Up" in 2006. While the chorographers admitted it was great creating scenes for Tatum, it was obvious that the others on stage needed a bit more work. But again, tear off the shirt and all is forgiven. Also in the cast is Matthew McConaughey who plays "Dallas" the club owner, and is the other highlight of the film. McConaughey has some of the best lines and his over-the-top ego truly is the more well-rounded of the characters.  Rounding out the cast is Joe Manganiello (better known as Alcide from True Blood), Kevin Nash who plays "Tarzan", Alex Pettyfer (known for "I Am Number Four" & "Beastly"), and Matt Bomer (from TV's "White Collar ") who most recently has been rumored as the possible Christian Grey of the upcoming adaption of "Fifty Shades of Grey."

Now when it comes to Blu-ray releases, the things most fans can't wait to see are the extras included with the film. Things they haven't seen. In this one, all that is added into the bonus features is a short "Backstage of Magic Mike" segment showing the actors talk about dancing and how the movie was made, and 3 extended stripping sequences (none of which are Tatum's).

The only other thing in this release tells the whole story in a nutshell. "DANCE PLAY MODE." Yes, they have made it possible to watch all the dance sequences back to back skipping out all the annoying storyline and bad acting. Now that's giving the ladies in the house what they really want! Show those abs and don't talk, you'll ruin it!

From a guy's point of view, you love your woman an awful lot if you're willing to watch this film! (I would suggest you let her watch it with her friends on MNF night)

I give it a half-star for Tatum's moves.

As for the ladies... Just press Dance Play Mode and enjoy!

For more information about Magic Mike visit the FlickDirect Movie Database. This release has been provided to FlickDirect for review purposes. For more reviews by Sean Ferguson please click here.