The Sessions Is An excellent heartwarming film on Blu-ray for mature audiences. 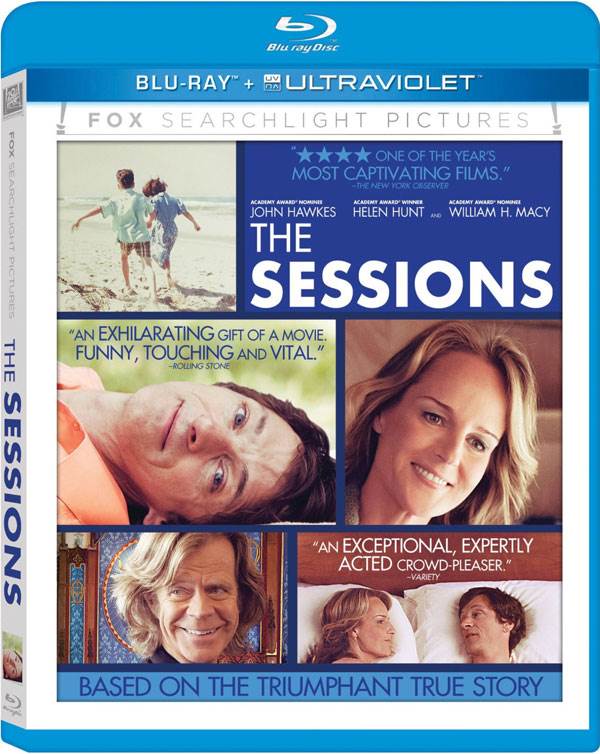 Purchase   DVD/Blu-ray/4K UHD
Based on a true story The Sessions will open your eyes, titillate and warm your heart.  Now on Blu-ray for your home entertainment, the strange account features excellent convincing acting on the part of John Hawkes (Golden Globe nominated Best Actor) and Helen Hunt (Oscar nominated for Best Supporting Actress).  If you want to see something completely different, poignant and unusual presented in a very creative film, then The Sessions would be an excellent choice.
The film delves into the life of poet Mark O'Brien (John Hawkes) who during his adolescent years came down with Polio leaving him debilitated and dependent on an iron lung. Able to live outside the apparatus for good periods of time, he earned a college degree and became a poet.  At the age of 38, Mark decided that his life would not be complete until he had sex.
After a falling out with his many attendants, he hires Vera (Moon Bloodgood) a young free spirited woman who sympathetically helps him contact special groups for help in his desire for intercourse.  After meeting with his priest (William H. Macy) and visiting a formal therapist, he gets introduced to Cheryl (Helen Hunt) a sex therapist.
The script has brilliant performances by main leads Hawkes and Hunt. Hawkes for his ability to create a character that has to use a pen to type and dial phone calls, goes out into society uninhibited from overly sympatric eyes, determined to reach his goal and able to use his mind in creating poetic pleasure.  The man in my estimation gives a genius performance so believable I am committed to the reality of it all.
Hunt as Cheryl gives a stunning performance as the gentle, professional sex therapist who understands the importance of what Mark wants to feel for the first time in his life.  Using her graceful charm see creates chemistry between the two characters that sanctions the acts they perform as appropriate and meaningful.  Even when a spark of love intervenes, Hunt and Hawkes are up to the performance challenge.
The kind and tender direction by Ben Lewin (Paperback Romance) keeps his film in the dramatic ring instead of a docudrama that would have been too insensitive for the subject matter.  He gives his actors a lot of latitude to show their skills of creating relationships with their characters and their importance even in the most impossible of circumstances.   Bringing the camera up close, making it intimate with the actors and showing a blend of drama with light comedy he makes The Sessions a very warm and eye opening film in the world of the incapacitated.
The Sessions has been rated R for strong sexuality including graphic nudity and frank dialogue.  The film is based on the real life of Mark O'Brien a journalist, poet and advocate for the disabled and the subject of another film. Called Breathing Lessons: The Life and Work of Mark O'Brien, the movie received an Academy Award in 1997 for Best Documentary Short.  The Sessions also received accolades at the Sundance Film Festival receiving the Audience Award for best dramatic film and Special Jury Prize for Best Acting Ensemble.
The video quality of the Blu-ray is extremely good, considering that there are a lot of interior shots that could have lost luster in the transfer from screen to disc.  Using the 1.85:1 aspect ratio it becomes a widescreen view with not an inch lost from the original theatrical presentation.  The actors take their excellent performances to home televisions and they are vividly enticing.
The sound quality features the DTS-HD Master Audio 5.1 that in today's electronic atmosphere is accepted as top tier.  You can hear a pin drop, it's that crystal clear. And with The Sessions, you'll hear every word and some words that may even make you blush.  Although 90 percent of the dialogue does come from the front of the screen so you really don't have to turn on your surround sound to enjoy the film.
The bonus features:
"Deleted Scenes" There are two deleted scenes that are nicely filmed but do not really add anything to the movie experience.
"Writer/Director Ben Lewin Finds Inspiration" Just like the title of the feature says, Lewin talks about how he was inspired to write the film and how he used his family to help produce, direct and even act.
"John Hawkes Becomes Mark O'Brien" Not what I expected, it's a quick clip on Hawks getting into his character and the things he had to do in the awkward positions he had to keep himself.  I would have liked to see more footage on the real Mark O'Brien here and the comparison between Hawkes in the role.
"Helen Hunt as the Sex Surrogate" I liked this one very much because it not only talks about surrogates, they have the real Cheryl Cohen-Green commenting on how good Hunt played the role and the accuracy of her character.
"A Session with the Cast" Everyone gets in on this clip that lasts only a short 4 minutes commenting on their roles.
"The Women Who Loved Mark O'Brien" Here again I was disappointed with this short feature that uses the actors to talk about O'Brien's loves.  It would have been nice to see the real Sandra and hear some of her comments on the film.
In addition to the aforementioned you can view the Theatrical Trailer and get a Sneak Peak at an upcoming new film release.
I found this very interesting and completely surprising; in addition to English, the film can be played in 9 different languages.  And how about this little tidbit; you can turn on 28 different subtitle languages.  It's an extra that you won't find on many Blu-ray discs and if you want to learn some of the language, turn on Turkish for example and then run the movie with English subtitles.
FINAL ANALYSIS: An excellent heartwarming film on Blu-ray for mature audiences. (A)
Cast:
Directed By:
MPAA Rating: R

For more information about The Sessions visit the FlickDirect Movie Database. This release has been provided to FlickDirect for review purposes. For more reviews by John Delia please click here.

The Sessions images are © Fox Searchlight Pictures. All Rights Reserved.

John Delia
The Sessions Is An excellent heartrending film for mature audiences.
Full Review | Grade: B