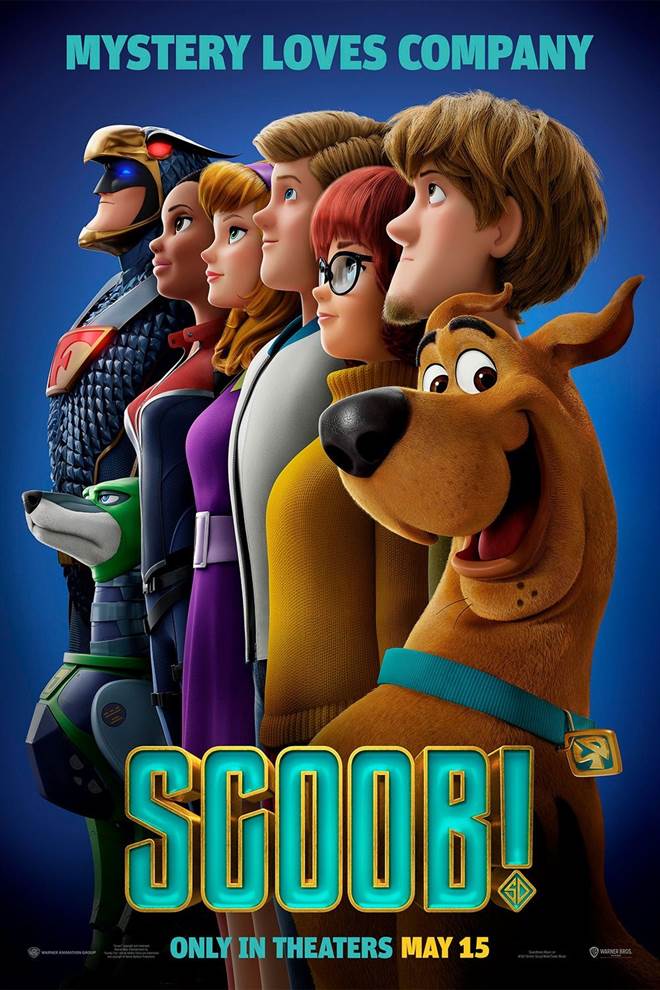 It was fifty-one years ago when that lovable, talking dog, Scooby-Doo, and his best friend Shaggy first appeared on television. Every Saturday morning they, along with their friends Velma, Daphne, and Fred, would ride around in their colorfully decorated van dubbed the "Mystery Machine" eating Scooby Snacks (amongst other foods) and solving shadowy crimes.  Said crimes usually involved a fake ghost or goblin chasing the gang until the culprit was apprehended.  Over the years the franchise has spit out several spin-off cartoons, television specials, and two live-action movies.  The latest feature, is an animated version called Scoob! Was supposed to hit theaters this spring but due to Covid-19, it will now premiere on video on demand on May 15, 2020.

For this version, we first meet Norville "Shaggy" Rogers (Will Forte; The Last Man on Earth) as a young boy who has no friends.  One day by chance, he finds and shares his lunch with a little dog that he names Scooby Dooby-Doo (Frank Welker; Transformers Dark of the Moon - voice).  Together they meet Velma (Gina Rodriguez; Jane the Virgin), Daphne (Amanda Seyfried; Mamma Mia!), and Fred (Zach Efron; The Greatest Showman) and the five become a cohesive group, sticking together through everything.

While bowling one day Scooby and Shaggy are attacked by mechanical scorpions and are taken by Blue Falcon (Mark Wahlberg; Ted), one of Shaggy's heroes.  He tells them about Dick Dastardly (Jason Isaacs; The Harry Potter Series) who, for some odd reason, is trying to steal Scooby-Doo.  When Blue Falcon makes scooby his own protective superhero suit, Shaggy becomes jealous and refuses to help defeat the bad guy.  However, tricked by Dirk, Shaggy eventually leads him right to Scooby-Doo.  Dirk then uses Scooby to open a portal to the underworld to save his own beloved pet, Muttley (Billy West; Futurama - voice) letting out the three-headed dog, Cerberus, that guards the underworld.

With an all-star cast, this movie should have been a no-brainer.  Efron, Seyfried, Rodriguez, and Isaacs sound exactly like themselves and are well-cast.  Ken Jeong (The Hangover series) steals the show as the Falcon's faithful sidekick, Dynomutt but Wahlberg sounds nothing like himself and I'm not sure he was the best choice to voice the Falcon.  Tracey Morgan (30 Rock) was a letdown as well portraying Captain Caveman but Simon Cowell's (American Idol) cameo as himself was excellent.

Tony Cervone, in his feature film directing debut, does a decent job of telling the story.  The plot is somewhat scattered as the writers tried to pack in a number of Saturday morning cartoon references and characters into a 90-minute film.  Some of those characters make sense, some don't, and tend to be more of a distraction than enhancing the movie.

The animation is very well done with vibrant colors and sharp details.  The soundtrack is also eclectic helping adult viewers take a stroll down memory lane.   Though there are some issues with the plot the film is technically strong and impressive.

While there is definitely a lot for kids to like in this movie the film is really geared towards adults.  As a child who watched Scooby-Doo, this was a nostalgic good time for me. The reproduction of the opening sequence with an updated theme song was especially a treat, however, Captain Caveman and Muttley were a bit of a letdown.  Luckily, the two have minor roles in the movie so they don't distract too much from the overall plot.

If you are wondering if Scoob! Is worth purchasing, I can promise it will be a family-friendly good time that kids will enjoy while parents will wistfully long for a return to the bygone days of their youth.

Maureen Buccellato
Scoob! will keep the attention of both kids and adults alike, so be sure to check it out of your next family movie night!
Full Review | Grade: B