Sly and Arnold work up a sweat and then it's over. 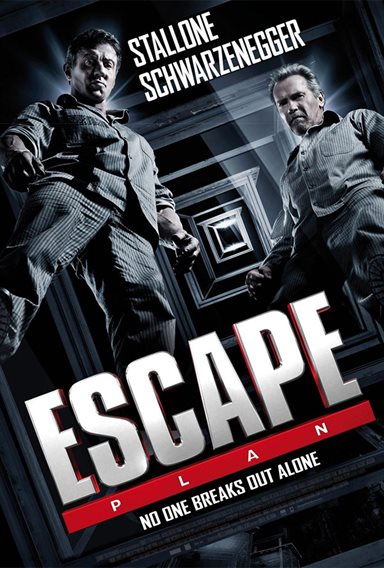 Purchase  DVD/Blu-ray/4K UHD
Well the ex-Governor and ex-boxer finally get full feature screen time together in their new film Escape Plan and they haven't broken the formula yet.  Playing familiar roles, delivering pedestrian lines and punching their way through this prison story that could easily have been made for cable, the two icons create a lot of their usual fuss and drama.  Although the film has some good moments there's not enough to draw a crowd of fans the size of their yesteryear.

Ray Breslin (Sylvester Stallone) is an ex-lawyer and co-owner a company he founded that tests the strength of high security federal prisons.  The idea of checking how secure a jail is by trying to escape came to Breslin when his wife and children were murdered by an escaped convict. He has been making prisons safer with his very unusual method of secretly getting admitted to the top federal facilities in the country as a prisoner and trying to escape.  When he's successful the prisons correct the problem and better the system.

After a successful escape from a Colorado Federal Prison a meeting is called in Breslin's office with co-owner Lester Clark (Vincent D'Onofrio) and Jessica Miller (Caitriona Balfe).  Miller wants to hire Breslin to test the safety of an independent secretly run prison called ‘The Tomb' and will pay huge money for his services.  Never having a payday this big Clark pushes Breslin to take this one last job.  He takes the job, gets taken away blindfolded to the mysterious destination and finds himself trapped in the heavily fortified facility.  After failing to get out on his first try he enlists the help of Emil Rottmayer (Arnold Schwarzenegger) who helps him put together a plan that they'll either do or die.

Director Mikael Håfström keeps his actors at a high level of interaction as they set up the plan by creating havoc and riots as part of their escape. The script takes on a lot of familiarity because Stallone and Schwarzenegger are known for their tight situation, get some guns and blast your way out films.  Although Escape Plan is not a First Blood or a True Lies the high profile actors have been seen in so many action films it's hard to differentiate their personas from one character to another. Hafstrom not matter what he does as a director will only get a Rocky and The Terminator with their macho courage and mayhem.

Hot on the heels of the Expendables the film may get a lot of interest from their fan base, but after seeing the film I don't think it'll get more than a small payoff in subsequent weekends. Just like The Last Stand, Schwarzenegger will probably not generate many full houses with this slow moving heavy dialogue laden script. Håfström doesn't have a large dossier of well known films under his belt and has not worked with many high profile actors like these two leads, so trying to make this script work must have been a chore.  Less is more with these two artists and a lot less dialogue is better too.

As far as the look of the film, I like the sets at the Colorado Prison that are very scary realistic and the prison riot at ‘The Tomb' gets very exciting.  The cinematography inside the cells of ‘The Tomb' showing the convicts living in clear glass boxes with guards on catwalks spying down on them works well to create a confining atmosphere.

Escape Plan has been rated R by the MPAA for violence and language throughout.  Most of the violence comes later in the movie but there are several fist fights early on. Be cautious when deciding to allow immature children see the film as it does have some scenes that are very inappropriate for adolescents.

FINAL ANALYSIS: Sly and Arnold work up a sweat and then it's over. (C)

Download Escape Plan in Digital HD/4K from the iTunes store.