While some parts may be scary for the little ones, it won’t prick your finger and make you fall into a sleep like death! It’s Disney magic at its best. 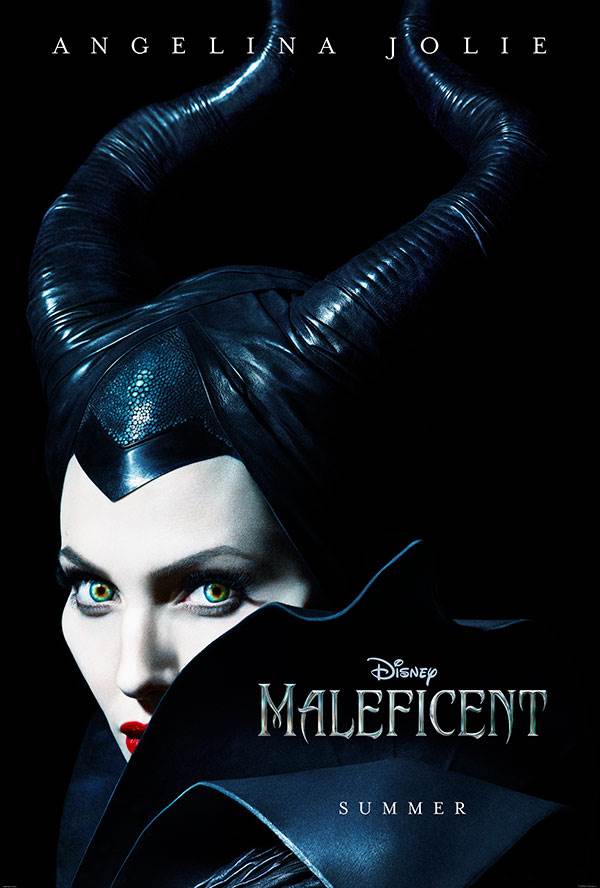 Purchase   DVD/Blu-ray/4K UHD
And I know it's true
That visions are seldom all they seem…..

When it comes to the tale of Sleeping Beauty, the previous visions are definitely not what they have seemed. With the current release of Disney's "Maleficent", it seems as if the fairytale of our youth was a simplified, one sided tall tale. Yes, as we all know, the truth has many sides of the story and now it's time to learn why Maleficent had such a huge chip on her shoulder and scared the daylights out of us as kids.

Maleficent, I will admit, was the movie I so hoped wouldn't let me down. Being the Disney fanatic that I am, I had high hopes and stayed away from all the trailers going into the theater blindly, like a kid wanting to be surprised. The best thing was, I wasn't disappointed. In fact from the very opening when I saw they replaced Cinderella's castle with Sleeping Beauty's castle in the Disney logo, I had that feeling like they would try to out shine the live version of "Alice in Wonderland". And outshine they did! Maleficent's Director Robert Stromberg puts on a visually stunning show, which isn't surprising since this is the man who has won Oscars for his work in "Avatar" & Alice in Wonderland" and other works have included "Master and Commander & "The Golden Compass".

While visuals & special effects are always a huge plus (especially during summer blockbuster season) it always comes down to the characters and the actors that play them. Was there anyone out there that saw the casting for Maleficent and said "I don't think she can pull it off'? Angelina Jolie's performance as Maleficent is just spot on perfection. When she steps into the king's hall with that evil "Well, Well" you cant help not to get goose bumps. I truly can't see anyone else who could pull off this role as wickedly as she does, and yet makes you sympathize for her. While Disney's original tale of Sleeping Beauty revolved around Princess Aurora, this story gives us Maleficent's side of the story.

In this new version, which from what I have gathered is based off the book "The Curse of Maleficent: The Tale of Sleeping Beauty by Elizabeth Rudnick, we find that Maleficent is actually a fairy who had wings and became the protector of the magical creatures of the forest. Maleficent comes across a young Prince Stefan wandering his way into the woods. Over time they get close and on his 16th birthday he gives her the gift of "True Loves Kiss". But the Prince eventually stops visiting, time goes by and when he finally comes back to visit, its to betray her. As the quote goes… Hell hath no fury like a woman scorned!

While Maleficent's tale varies in many places from the original. The freshness and feel of the story feels more current and realistic. Disney's classic tail of Sleeping beauty was a bit flat when it came to characters and you also have to consider its been 55 years since its release. The cool thing is, "Walt Disney's Sleeping Beauty" was a cinematic masterpiece changing the way animated movies looked and were looked at and now Maleficent holds up the same tradition. While I'll admit that some parts had a "Lord of the Rings" feel to it, there were parts that just beamed of insight from Walt Disney's vision. Several pivotal scenes were perfectly redesigned straight from the original animated cells, like when Maleficent casts the curse on baby Aurora and when Prince Phillip meets Aurora for the first time. But the true fun of Maleficent was catching small snippets of the past, like when pixies were skating on the water as if they jumped right out of "Fantasia". It definitely felt as if Director Robert Stromberg wanted to pay homage to the Original Disney classic as well as make something more contemporary that the current generation wouldn't see as dated.

While the cast is far out shined by Angelina Jolie, there are some stand out performances. The most amusing character is Diaval played by Sam Rieley. Diaval is actually Maleficent's companion through out the film. Diaval is actually a crow who was saved by Maleficent. Diaval becomes Maleficent's wings when she has none and while he started out a crow he changes form at Maleficent's every whim with a flick of her hand. His character was a true welcomed addition to the story adding more depth and some comic relief here and there. And then there is Elle Fanning (Super 8 & Phoebe in Wonderland) playing Aurora the curious "little Beastie". Sharlto Copley (District 9 & Elysium) pulls off a great performance as King Stephan who's paranoia drives him to take on Maleficent till the bitter end. Brenton Thwaites (from TV's Home and Away) plays Prince Phillip and the 3 fairies who are charged with Aurora's upbringing are played by Imelda Staunton (Harry Potters own Delores Umbridge), Lesley Manville & Juno Temple. The coolest cameo in the film is Angelina's very own daughter, Vivienne Jolie-Pitt plays a bit part as Aurora at age 5. The rumor has it when all the other young child actors saw Jolie in full costume, they all went running, except for her own daughter.  I would run too!


Maleficent also has one other highlight, a beautiful score composed by James Newton Howard, who has also composed brilliant scores for "The Hunger Games", "King Kong (2005)", "Peter Pan (2003)" and shared composing duties with Hans Zimmer on Christopher Nolan's Dark Knight series. Also, during the credits is a haunting version of "Once Upon a Dream" by Lana Del Rey, which you wont soon forget.

Showing great restraint in the age of dragging movies out into trilogies and 3 hour spectacles, they kept Maleficent to a short 97 minute running time which is only 22 minutes longer than the original Disney classic.
Maleficent can be seen with or without 3D & in IMAX3D. I had the opportunity to see it in 3D and while it isn't a must in 3d, it is a must see!

I give it 5 Spinning wheels out of 5
While some parts may be scary for the little ones, it won't prick your finger and make you fall into a sleep like death!
It's Disney magic at its best.
You'll love it at once, the way you did once upon a dream.
Cast:
Directed By:
MPAA Rating: PG