With great acting and an interesting plot, Kingsman had the potential of being a truly great film and, while it is fun, enjoyable and entertaining, it falls short of being iconic. 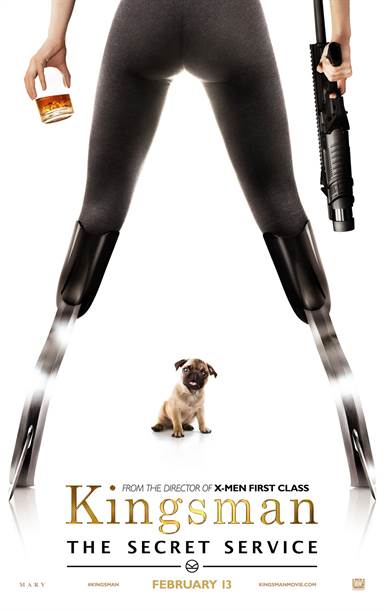 Purchase   DVD/Blu-ray/4K UHD
Who doesn't love a good spy movie?  Action, adventure, intrigue and great gadgets all blending together to create an enjoyable movie experience.  Throw in a strong, seasoned group of actors and you have the makings of a great film.   Twentieth Century Fox had attempted to tackle this genre with Kingsman: The Secret Service being released in Theaters on February 13, 2015.

Kingsman: The Secret Service follows an elite group of spies who operate covertly outside the confines of traditional government agencies.  They foil all types of international plots without receiving any recognition.  They live their lives under the guise of employees at the Kingsman tailor shop.

"Eggsy" (Taron Egerton; The Smoke) is a young man from the "wrong side of the tracks" who never fully lived up to his potential despite being physically agile and very intelligent.  Unbeknownst to him, Eggsy's father was killed while he was a member of the Kingsman service.  When Eggsy calls in a favor he finds himself under the tutelage of Harry "Galahad" Hart (Colin Firth; The King's Speech, Before I Go To Sleep), another Kingsman who owes his life to Eggsy's father.

On the plus side, the acting is terrific.  Firth plays the gentleman, British spy perfectly with his suave demeanor shining through.  Egerton holds his own among a group of older, talented actors.  Michael Caine is well cast as Arthur, the head of the Kingsmen (think of M from James Bond) and Samuel L. Jackson is great as the villainous yet comical Valentine, a billionaire with thoughts of "cleansing the population in order to counteract the effects of global warming" (similar to the plot of Dan Brown's Inferno).  In this role Jackson plays a much different character than we are used to seeing from him which is refreshing, although his lisp can get a little annoying.  Mark Strong (Sherlock Holmes) rounds out the cast as Merlin and there is a great but briefly on screen character portrayed by Mark Hamill (Star Wars) which was a nice surprise.

On the negative side, the problem with Kingsman is that it has a bit of an identity crisis.  While it tries hard to be a James Bond type film it also includes elements of Inspector Gadget and Austin Powers with a dash of Kill Bill thrown in.  It attempts to be sophisticated yet cartoonish all at the same time and, for me at least, it didn't really work.  Much of the sillier moments came across campy and distracted the viewer.  While there were elements of director Matthew Vaughn's (X-Men: First Class) previous works, there were also moments of departure from his tried and true formula and it failed to be "innovative".

With great acting and an interesting plot, Kingsman had the potential of being a truly great film and, while it is fun, enjoyable and entertaining, it falls short of being iconic.  Audiences will like it for the most part and it certainly isn't a waste of the over two hour running time and the price of admission.  Its release is timed well as I can see it being a safe "date night" on Valentine 's Day.  I just was hoping the film would find its "voice" and stick with it but in the end it didn't.  B