The Beauty of Reality...Disney’s Beauty and the Beast 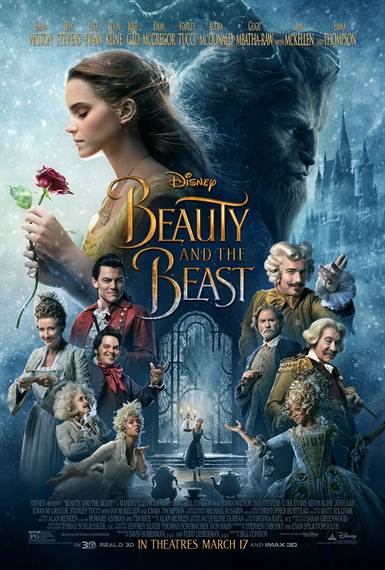 Purchase   DVD/Blu-ray/4K UHD
Disney's latest masterpiece, Beauty and the Beast, is a live-action adaptation based on the 1991 animated classic.  Some fans of the original (including original cast members that might have been quoted in the press) have questioned the need for or purpose of "recreating" such a timeless favorite.  Had the studio decided to leverage the technology available today in order produce an updated more spectacular animated version, the ire might be justified.

This is not, however, a reinterpretation or reinvention aimed at improvement.  Technology now makes it possible for that animated magic and fantasy to come to life beyond our imaginations.  Those die-hard original fans will not be disappointed when they see their beloved favorite unscathed, honored and elevated to an entirely new echelon.  For those who (like me) did not fall to their knees in 1991, the added realism will enchant them as well.  The pair that can never agree...theater or film...will share an enjoyed experience that captures the whimsy of each.  This one is for the tomboy and the princess alike.

The introductions of the young Prince (Dan Stevens), and that of Belle (Emma Watson), are an homage to the Golden Age of Hollywood.  The large scale, elaborate sets are breathtaking.  More than 1,000 crew members worked exhaustively to build and decorate the sets with extensive hand-detailed craftsmanship and artistry.  What's more, the underlying idea of female empowerment extends to all of the design team's department heads.  All female and at the top their fields; many being frequent collaborators of director/co-screenwriter Bill Condon (Dreamgirls; Kinsey).

The score comes courtesy of Alan Menken.  The original songs written by Alan Menken and Howard Ashman are given new breath and breadth.  Some of Ashman's original lyrics not used in the animated film have been added back.  The new recordings coupled with three new songs that Menken and Tim Rice co-penned help add greater depth in both emotion and backstory.

The newer elements to the story help answer those lingering questions of how both Belle and the Beast came to be who they are when we come upon them.  We are given glimpses into their lives before this.  We witness their shared experience, and how differently it shaped them each.  The human experience of love and compassion ever present for one, and absent to the other.  Condon worked with co-screenwriters Evan Spiliotopoulos (The Huntsman: Winter's War; Hercules) and Stephen Chbosky (The Perks of Being a Wallflower; Rent) to flesh out the familiar characters giving them greater dimension while honoring their legacy.

Condon established the catalyst for bringing these beloved characters to life on screen with casting of Emma Watson (Harry Potter; The Bling Ring) in the role of Belle.  An activist and goodwill ambassador in her personal life, Watson embodies the strength, will, wonder and heart that empower her character.  The entire cast is extraordinary in their talent and humanity, and also includes: Josh Gad (a fellow U School and Charlie Redler alum),  Luke Evans, Kevin Kline, Ewan McGregor (swoon), Audra McDonald, Stanley Tucci, Gugu Mbatha-Raw, Emma Thompson, Ian McKellen, Hattie Morahan, Nathan Mack and more, I'm sure.  The energy was established by Director Bill Condon with the cast and crew that infused this project at every level… every stage.  That beauty truly comes from within, and shines through every facet of the film.

The technological wonder, the magic of the wardrobe, the stunning cinematographic experience, the moving score, the grand performances and the subtle nuances...the difficulty in reviewing this film is maintaining the element of suspense and surprise in lieu of expanding on every detail on screen and behind the scenes.  Perhaps for the Blu-ray release...

Purchase a DVD/Blu-ray/4K UHD physical copy of Beauty and the Beast today at Amazon.com

Download Beauty and the Beast in Digital HD/4K from the iTunes store.

For more information about Beauty and the Beast visit the FlickDirect Movie Database. For more reviews by Judith Raymer please click here.

Read More Reviews For Beauty and the Beast