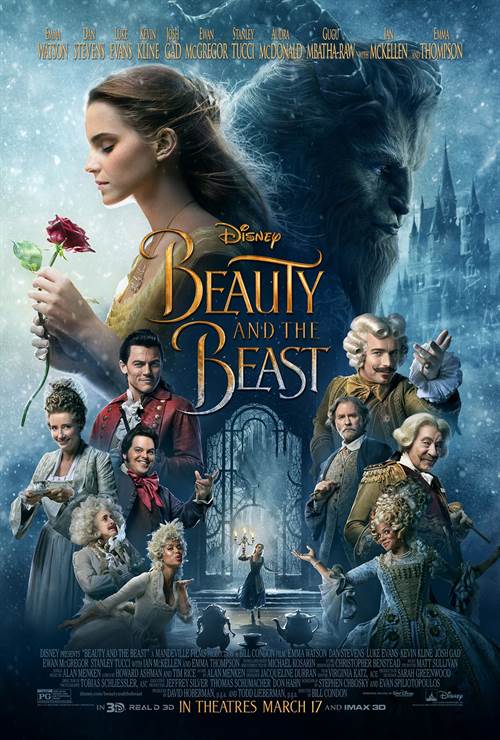 The beloved tale will be retold for the big screen with a modern live-action lens and the help of transformative CG magic. Emma Watson and Dan Stevens will star as Belle and the Beast/Prince respectively, and Luke Evans will play the role of Gaston. Emma Thompson has joined the cast as Mrs. Potts and Kevin Kline as Belle's father, Maurice.

Purchase DVD/Blu-ray/4K UHD physical copy of Beauty and the Beast today at Amazon.com

Download Beauty and the Beast in Digital HD/4K from the iTunes store.


Beauty and the Beast Earnings Hit the $1 Billion Mark  4/13/2017 2:40 PM EST
Disney's "Beauty And The Beast" has officially crossed over the $1 billion mark in worldwide earnings.The film, which was released March 16, was already 2017's top earning film, as well as being the top earning live-action movie musical of all time. The earning will keep growing, too, as the premier in Japan is slated for April 21.Surely these numbers don't surprise many people. The 1991 animated ...  More>>

Russia to Investigate Beauty and the Beast for Gay Propaganda  3/5/2017 11:07 AM EST
Disney's Beauty and the Beast hits theaters on March 17, but not without controversy.  You may be wondering what could possibly be controversial about this animated turned live-action classic? Well, according to Russia's United Party MP, Vitaly Milonov, the film could be banned under their "anti-gay" laws. In the film, Josh Gad portrays Le Fou, one of Gaston's admirers.  It is said that this is Di...  More>>

Disney Announces Special Opening Night Events for Beauty and the...  1/31/2017 3:53 PM EST
Walt Disney Studios will be scheduling special opening night events for their highly anticipated film Beauty and the Beast. The film is set for release on March 17, but on March 16, the special events will take place at about 590 locations nationwide before the 7:00pm showing at IMAX theaters, as well as other select premium large formats.  They will include special behind-the-scenes on-screen con...  More>>

Ariana Grande and John Legend Will Sing The Title Song for Movie...  1/12/2017 12:36 PM EST
Disney has outdone themselves with Beauty and the Beast, not only casting Emma Watson, as Belle, but by having GRAMMY nominated and multi-platinum selling artist Ariana Grande and 10-time GRAMMY, Oscar®-winning and multi-platinum selling singer/songwriter/ musician John Legend perform the Oscar and GRAMMY-winning duet "Beauty and the Beast" as the title track for Disney's new live-action film adap...  More>>

Beauty and the Beast Blu-ray Review 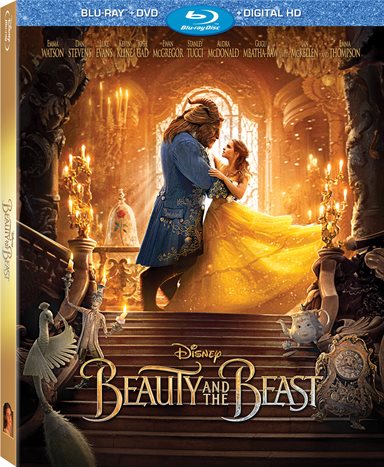 Disney is always trying to reinvent itself; from new attractions at the theme parks to merchandising to their latest animated successes like Frozen and Moana.  The same can be said for one of their newest ventures, turning their animated movies into live action films.  First, there was Maleficent then Cinderella and now we have Emma Watson (the Harry Potter Series) and Dan Stevens (The Guest) in Disney's latest live action endeavor, Beauty and the Beast.  The beloved classic comes to life in the Blu-ray combo pack, in stores this week.

We all know the "tale as old as time"…Belle's (Watson) father, Maurice (Kevin Kline; A Fish Called Wanda), becomes a prisoner in a castle that seems to be alive.  When she comes to rescue him, she learns he is being held by a beast (Stevens) and offers to trade places with her father.  Hoping she will break the curse, the Beast agrees and takes her instead. After a period of time, he falls in love with her.

However, when Maurice returns to the village and tells them of the Beast's existence, he is once again locked up, this time for being crazy.  Belle eventually returns, shows the villagers the Beast in an enchanted mirror and starts a gang of people, led by Gaston (Luke Evans; Dracula Untold), to hunt and attempt to kill the Beast.  Ultimately, Gaston is the one dead and Belle professes her love for the Beast, breaking the spell and restoring him to a handsome Prince.

Watson is an excellent choice to play Belle as she is not only incredibly talented but beautiful as well. She sings well enough and makes Belle into a stronger version of the animated woman.  While the latter has softer edges than Watson's Belle, these times and this film call for a tougher character than we have previously seen.  Stevens is also well cast and these two actors are surrounded by a fabulous, all-star cast including the perfectly cast Evans, Josh Gad (Frozen), Ewan McGregor (Trainspotting), Emma Thompson (Love Actually), Ian McKellen (The Lord of The Rings), Audra McDonald (Private Practice) and Stanley Tucci (The Devil Wears Prada).

The songs and scenes we love from the original mostly remain but Director Bill Condon (Dreamgirls) also added some terrific new songs and additional backstory for both Belle and the Beast's characters.  The ballroom dance sequence is beautifully shot and the large musical numbers are so well done you think you are watching an elaborate Broadway play.

The 1080p high definition video has an aspect ratio of 2.39:1 giving the film a full-bodied experience when watched on a television screen. The colors are fantastic and vibrant, especially Belle's ball gown.  The audio is extremely important in this case and is presented in DTS-HD Master Audio 7.1.  The orchestration is robust and hearty and plays beautifully across all audio channels.

The Blu-ray offers a number of terrific extras, especially a 13 and a half-minute look at the first table read including an orchestra and ensemble singers and dancers.  There are also features about the behind-the-scenes of the film, the female crew members of the movie, making the musical sequences, deleted scenes, Celine Dion's role in the original and new films, Karaoke versions of the songs and the music video for the song Beauty and the Beast.  All of the extras are well worth watching and informative.

Disney is on a role with their movies, both animated and live-action, and the production value is part of the reason why.  The time taken to create the set pieces that come to life and all the special effects sequences are incredibly done and, though they had the potential to, don't seem cheesy or fake in any way.

Beauty and the Beast is a classic story and both the animated and this new live-action version should be part of any home video library.