Larson is a great casting choice to play Danvers/Captain Marvel. She has an air of power with a soft femininity underneath and a sarcastic wit that helps lighten the mood of the serious, action film. 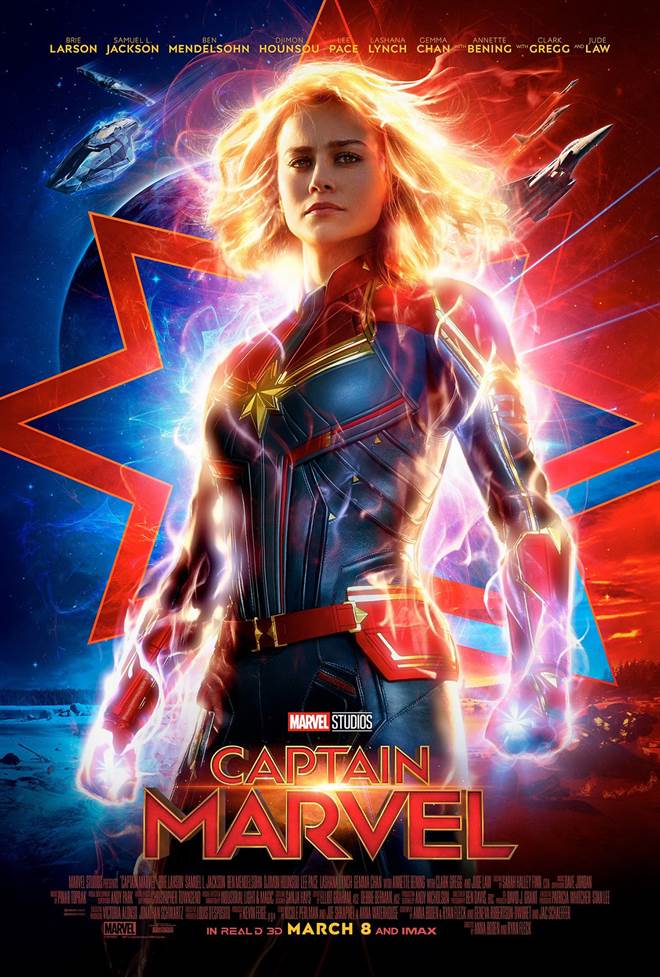 Purchase   DVD/Blu-ray/4K UHD
Carol Danvers first appeared in Marvel Comics in 1968  as a United States Air Force pilot (rather forward thinking of them, don't you think?).  In 1977 she became Ms.Marvel when an explosion causes her DNA to fuse with Kree Warrior Mar-Vell, giving her superhuman powers. Unless you have been living under a rock for the past few years, you know Captain Marvel was coming to theaters portrayed by Oscar-winning actress Brie Larson (Room). That moment has finally arrived as the latest film in the Marvel Cinematic Universe heads to theaters on March 8, 2019.

Kree warrior hero Vers (Larson) has the same recurring nightmare and doesn't know why.  She remembers very little of her past except being in some kind of war.  She trains with her Starforce Commander Yon-Rogg (Jude Law; The Talented Mr. RIpley) who tries to help her harness her power and curb her emotions.  They, along with the rest of their team, are fighting the Skrull, a group of alien shapeshifters out to destroy the Kree. After being captured and escaping from the Skrull, Captain Marvel finds herself on Earth searching for the person in her recurring dreams, Dr. Lawson (Annette Bening; American Beauty).

While searching for Lawson and fighting the Skrull on Earth, Captain Marvel meets Nick Fury (Samuel L. Jackson; Pulp Fiction) a member of S.H.I.E.L.D. At first, he doesn't believe anything she is telling him and he simply thinks she is crazy until he has a firsthand encounter with one of the shapeshifters.  Together he and Captain Marvel find Pegasus, a top secret project Lawson was working on which leads them to Carol Danvers' best friend Maria Rambeau (Lashan Lynch; Brotherhood).  After listening to a tape of the black box from her plane crash, Captain Marvel remembers who she and Lawson are and that the Skrull are not the enemy.  She must then find the top-secret project Lawson was working on before it falls into the wrong hands.

Larson is a great casting choice to play Danvers/Captain Marvel.  She has an air of power with a soft femininity underneath and a sarcastic wit that helps lighten the mood of the serious, action film.  Seeing Fury digital de-aged was incredible and I'm curious as to what Jackson thought when he first saw it.  Law is well cast as Marvel's Commander because he lulls the audience into a false sense of comfort when in reality his motives are questionable.  Bening plays dual roles here and does so wonderfully.  She is kind and generous as Carol's friend and mentor and deliciously evil as Supreme Intelligence of the Kree.

The special effects in this film are really well done and even more accentuated in IMAX.  I highly recommend spending a few more dollars at the theater to experience it in this format.

The story is interesting and plays out well on screen.  For me, the 1990's references were a stroll down memory lane and I loved it.  The recreations were excellent and most of the eclectic soundtrack was enjoyable other than an ill-placed No Doubt's I'm Just A Girl.  I'm not sure what directors Anna Boden (Sugar) and Ryan Fleck (Half Nelson) were thinking on that one but it definitely didn't work.

The film also had a few cheesy moments and the last fifteen minutes of the film left something to be desired for me.  From the glowing Captain Marvel to the cringe-worthy dialogue it loses the momentum it built up throughout the film. However, despite being two hours long, the movie doesn't seem long at all.

Captain Marvel had a more interesting story than the trailers led us to believe and it is blended with terrific action sequences and great special effects to make for a very entertaining movie.  After watching this film, I can't wait to see what Captain Marvel brings to this spring's Avengers: Endgame.

Nathan M Rose
While it has been a very long time in coming, this female-led comic book film is superb in every way possible.
Full Review | Grade: A