Jones is wonderful returning as the voice of the king, Mustafa. Oliver is also great as Zazu, the bird, bringing some levity to the film. 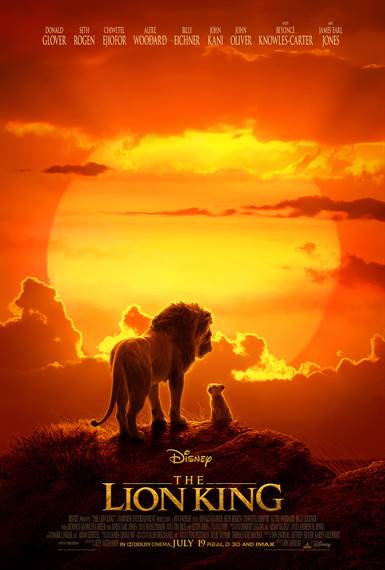 It was 25 years ago that Disney brought us their animated version of the classic Shakespearean play, Hamlet. The Lion King offered wonderful animation, an original soundtrack created by Tim Rice and Elton John and a somewhat humorous look at the animal kingdom.  For ninety minutes, it entertained audiences and eventually grossed almost a billion dollars worldwide.  The music probably became more well known that the actual movie and the characters but the film is considered one of the new Disney classics.  In Disney's ongoing trend of reimagining their animated films as live-action movies, The Lion King is the most recent one to receive this treatment and the third one this year.

Mustafa (James Earl Jones; Field of Dreams) is the king of Pride Rock much to the dismay of his brother, Scar (Chiwetel Ejiofor; 12 Years a Slave) and once Mustafa's son, Simba (Donald Glover; Solo: A Star Wars Story) is born Scar becomes more upset.  In an effort to become king he devises a plan to get rid of Simba, which unfortunately doesn't pan out.  Scar then decides to kill his brother, Mustafa and make Simba think it was his fault convincing Simba to run away and never come back.

Scar, of course, takes the throne and becomes king allowing the hyenas to run wild and overrun the kingdom.  Fearing for their lands, Nala (Beyonce; Dreamgirls), Simba's childhood friend, runs off to try to find help.  She eventually comes across an adult Simba who she thought was dead and tells him what has happened to their land once Scar became king.  Together they return to Pride Rock where Simba fights his Uncle and the truth is revealed, that Scar, not Simba, actually killed Mustafa.  Simba eventually defeats Scar and takes his rightful place as King, with Nala by his side.

While most of the cast is very good, Jones is, of course, wonderful returning as the voice of the king, Mustafa.  John Oliver (The Smurfs) is also great as Zazu, the bird bringing some levity to the film.  Young Simba (JD McCrary; K.C. Undercover) is strong as well.  Unfortunately, Glover and Beyonce are less than stellar and their voices don't blend well on the iconic song Can you feel the love tonight.   Part of the problem is that the audio is not mixed well and all the voices seem one-dimensional making the performances and the songs fall flat.

The visuals, on the other hand, are breathtaking and magnificent and the graphics are strong for the most part.  The scenery of the African plains is incredible with layer upon layer of depth and color while the animals are authentic and, most of the time, the CGI is very well done with only a few minor hiccups here and there.

There are moments Director Jon Favreau (Iron Man) spends a bit too much time on but the pacing doesn't seem slow for the most part.  The opening visuals are shot for shot from the 1994 version but the vocals on Circle of Life leave something to be desired which is sad because it should have been one of the signature pieces of the movie and the song doesn't meet the expectations that the visuals layout in front of the viewer.

The Lion King has been a staple of the Disney catalog for the past twenty-five years and since the announcement of this live-action, version fans have been anxiously waiting to see the final product.  Would it be as good as the original?  How would they pull off the live-action with animals?  Would the cast be able to live up to expectations?

I'm happy to report that for the most part, Disney has done well with this one.  Casting choices may not have been the best but Director Jon Favreau (Iron Man) manages to put together a fairly strong rendition of the film and let's face it – it's Disney, it's a beloved film and looks really good.  It is certainly the strongest of the three live-action "reimagined" films they have released this year so I have no doubts they will have another box office winner on their hands.

Purchase a DVD/Blu-ray/4K UHD physical copy of The Lion King today at Amazon.com