The visual effects are incredible and Muschietti’s vision is masterful and truly inspired. 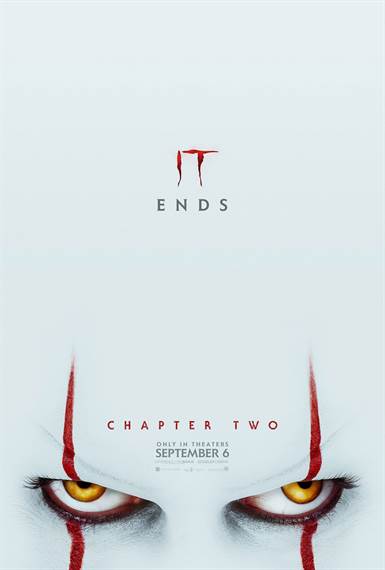 Arguably, one of the most highly anticipated films of this year is the ending of the highest-grossing horror film of all time…It.  People have been waiting for It Chapter Two since they flocked to theaters two years ago to watch Pennywise the clown (Bill Skarsgard; Deadpool 2) terrorize the small town of Derry.  I suppose the "fear" here for Director Andy Muschietti (Mama) is whether or not the film can live up to all the hype and buzz it has generated.  Will people be convinced the adult cast is really the losers club all grown up?  Will the ending suffer the same fate as both the book and the miniseries (FYI, people hated those endings).  I can assure fans, they won't be disappointed.

The year is 2016. It has been twenty-seven years since the losers club defeated Pennywise and made their pact.  Now, successful adults, they don't even remember the events that occurred or the promise they made until they get a call from Mike Hanlon (Isaiah Mustafa; Horrible Bosses) telling them to come home because the pattern has started again and children are going missing.  Barely cognizant of why they are returning, the losers club meet in Derry to face the evil that permeates their town.

As they begin to remember, they each must face their fears and collect an individual talisman from their childhood to be used in a ritual to defeat Pennywise.  Of course, Pennywise is watching and terrorizing them to the point that they want to give up and leave.  Beverly (Jessica Chastain; Zero Dark Thirty) and Billy (James McAvoy; Split) convince them to stay and fight even without Stanley (Andy Bean; Here and Now) who killed himself instead of facing the alien again.  Together they once again face the creature and figure out how to stop him once and for all.

This cast (both the adults and the original children) bring these characters to life and allow the audience to see their inner demons.  Chastain and McAvoy along with Bill Hader (Barry), Jay Ryan (Beauty and the Beast), and James Ransone (Sinister) embody the essence of the younger actors creating a seamless transition that took place over twenty-seven years.  Skarsgard is once again truly terrifying as he reprises his role as the creature that is invading their minds and scaring them, all the while feeding off their fear.  There is also a fantastic cameo by the original novelist that is absolutely hilarious and put a smile on my face.

The visual effects are incredible and Muschietti's vision is masterful and truly inspired.  His use of point of view shooting draws the audience in and enfolds them into each character's story.  Beverly's and Ben's scenes with the blood and dirt are chilling and the creatures and black goo that seeps through their reunion dinner will make anyone think twice about heading out to a Chinese restaurant anytime soon.  The final battle in the cave, however, seemed a little too over the top for me and left me with flashbacks of Raiders of the Lost Ark at moments. Having said that, Muschietti was certainly the right person to direct the 2017 film and this second chapter as he brings the psychological aspect of the story to life vividly.

Stephen King (Pet Semetary) is known for bringing the warped and demented world to life in stunning ways in his writing and Muschietti definitely follows his vision.  However, at the end of the day, this story boils down to a group of young kids with insecurities defeating the bully that plagues them throughout their lives and who can't relate to that?

Admittedly I am neither a horror nor a Stephen King fan but I found this second film more interesting and entertaining that the first and a satisfying ending to the events and stories set up in the 2017 film.  Well worth spending your money to go see it, especially if you loved the beginning movie.

Purchase a DVD/Blu-ray/4K UHD physical copy of It Chapter Two today at Amazon.com

Download It Chapter Two in Digital HD/4K from the iTunes store.

Listen to the It Chapter Two soundtrack on Apple Music.