Home / Reviews / Death On The Nile

While slightly better than 2017’s Murder on the Orient Express, Branagh needs to stop directing the film adaptation of Christie’s novel and instead needs to focus on playing Poirot as well as he does. 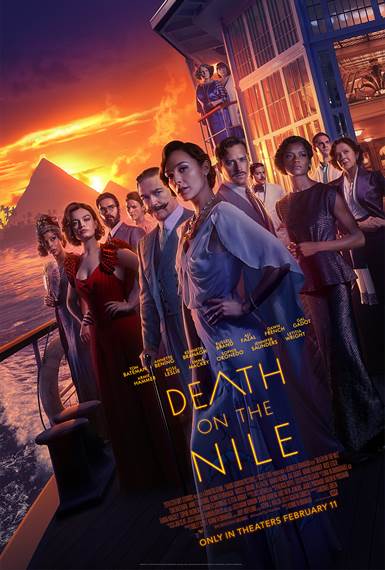 Dame Agatha Mary Clarissa Christie was born in 1890 and died eighty-five years later in 1976.  Growing up in a wealthy, upper-middle-class family, she was mainly homeschooled.  In 1920, after several rejection letters, her novel, The Mysterious Affair at Styles, was published and Belgian Detective Hercule Poirot was introduced to the world.  Poirot was the main character of half of Christie's novels until she killed him off in 1975.

Poirot has been portrayed on stage and screen by several different actors but in 2017, Kenneth Branagh (Henry V) directed and starred as Poirot in a remake of Murder on the Orient Express.   Boasting an all-star cast, including Johnny Depp (The Pirates of the Caribbean Franchise) and Dame Judi Dench (Skyfall), the film received a mediocre response from critics but made over $300 million worldwide.  After a couple of COVID delays, Branagh's second Christie/Poirot movie, Death on the Nile, is going to be released in theaters this week.

Linette Ridgeway (Gal Gadot; Wonder Woman) and Jacqueline de Bellefort (Emma Mackey; Sex Education) had been friends for many years so it was only natural that Jacqueline would want Linette to meet Jacqueline's Fiancé, Simon Doyle (Armie Hammer; Call Me by Your Name).  Linette is beautiful, powerful, and an heiress and it becomes obvious to Jacqueline that Simon and Linette are attracted to each other.  Simon leaves Jacqueline and marries Linette but an obsessed Jacqueline follows the couple and shows up anytime they are in public.  Poirot, on holiday in Egypt, is told by Linette that she doesn't feel safe, so he is not shocked when he discovers she has been murdered.   Of course, he investigates all those who had access to Linette and finds her killer and an intricate web of lies and deception.

Death on the Nile is Branagh's second turn as Poirot while directing a movie and it seems he is getting better at it.  Murder on the Orient express was uninspired, and the acting was subpar based on the level of talent involved.  This second film also doesn't evoke excitement or suspense but is serviceable.  The cast is good, but Gadot seems a little stiff and it is difficult to get past the scandal surrounding Hammer to really embrace Simon. Russell Brand (Get Him to the Greek) was surprisingly good as the often-comedic actor portrays a serious character with not a joke to crack anywhere in sight.   Mackey is ok overall.  The best of the group thought are Sophie Okonedo (The Secret Life of Bees) and Letitia Wright (Black Panther) who portray jazz singer Salome Otterbourne and her niece/manager, Rosalie.  They are both intelligent and observant and

Branagh leaves a great deal to be desired when it comes to directing and cinematography.  There are wide overheard shorts and extreme close-ups back-to-back which can be disorienting.  The visual effects are also obviously hindered by the budget as green screen backgrounds look fake and almost laughable.  The beginning scene in the dance hall, however, is well done and leaves the viewer craving more - side note: there is NO WAY people would have been dancing in a public club like that during the 1900s (for a minute I felt as if I was watching Dirty Dancing).

While slightly better than 2017's Murder on the Orient Express, Branagh needs to stop directing the film adaptation of Christie's novel and instead needs to focus on playing Poirot as well as he does.  Mystery, and especially Christie mystery, fans will enjoy this remake but will probably walk away somewhat unfulfilled.  The movie is entertaining but I don't see it winning any awards this year.

Purchase a DVD/Blu-ray/4K UHD physical copy of Death On The Nile today at Amazon.com

Download Death On The Nile in Digital HD/4K from the iTunes store.

For more information about Death On The Nile visit the FlickDirect Movie Database. For more reviews by Allison Rose please click here.

Death On The Nile images are © 20th Century Studios. All Rights Reserved.