Marry Me checks off all the boxes of a traditional romcom, which if you like the genre, you will probably enjoy this movie. 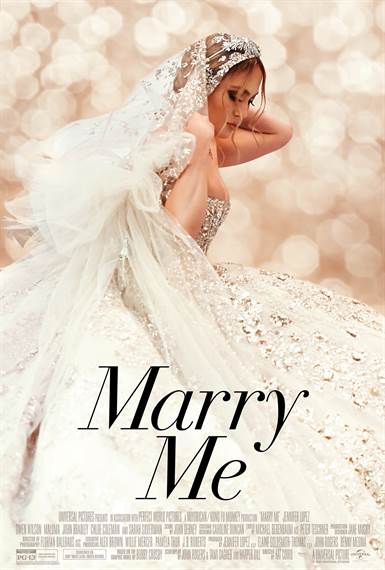 It's February... the weather is cold and in the northern part of the United States and Canada snowfall is a regular occurrence.  Love is also in the air as the middle of the month brings the arrival of Valentine's Day.  Hearts and flowers decorate stores as chocolates line the shelves.  Couples break up while others get engaged.  Of course, romantic comedies are released into theaters usually with the same basic plot and a happy ending.  This year Universal Pictures offers a movie based on a novel called Marry Me.  Starring Jennifer Lopez (The Wedding Planner) and Owen Wilson ( The Wedding Crashers) - see what I did there? - the film opens nationwide on February 9, 2022.

Kat Valdez (Lopez) has it all.  She is a successful superstar who has an equally famous fiancé, Bastian (Maluma; Encanto), and their latest song, Marry Me, is a big hit.  They decide, while on tour together, they will get married at their New York City concert in front of twenty million fans worldwide (over streaming) but moments before the big event a video hits the internet changing Kat's life forever.  It shows Bastien and Kat's assistant kissing and heading into a hotel room.  Devastated, Kat impulsively picks Math Teacher Charlie (Wilson, who is holding a "marry me" sign for a friend) and marries him.  The next day, instead of having the marriage annulled, Kat convinces Charlie to stay married to her for a few months to make her seem less crazy.

Lopez is actually pretty good in this romcom, probably because she is playing herself somewhat.  At moments she is the famous diva, running to meetings, rehearsals, and endorsement deals.  Other times she is "Jenny from the block" - down to earth, sweet, and vulnerable.  Wilson is just the "nice guy" caught up in a life he knows nothing about and wants very little to do with.  Sadly, while the two characters might make great friends, they don't have much chemistry together romantically, so their "hook-up scenes" are a little awkward.  Chloe Coleman (My Spy) and John Bradley (Moonfall) play Charlie's middle school-aged daughter and Kat's manager respectively and both do a very good job in their roles.  Sarah Silverman (Wreck-it Ralph) who plays, Parker,  Charlie's friend does what she does best, acts a little goofy while pushing Charlie out of his comfort zone.

Lopez's costumes for this film are striking, especially the concert costumes.  However, it is the bejeweled wedding dress that made headlines last year when pictures of Lopez wearing it surfaced while filming.  Many, including myself, felt, while the Zuhair Murad gown was beautiful, it was ill-fitted as JLo's chest looked like it wanted to burst out of the strapless top at any moment.  This flaw was apparent during the scenes in which she was wearing said dress and it became a distraction.

Marry Me checks off all the boxes of a traditional romcom, which if you like the genre, you will probably enjoy this movie.  There are also some very good songs written by JLo and Maluma specifically for the movie so expect to hear the soundtrack on the radio next week.   The plot is also based on a graphic novel of the same name so expect some increase in sales for that as well.

Lopez tends to play similar characters...strong women who are rather vulnerable underneath their hard exterior.  The Wedding Planner, Maid in Manhattan, even, Out of Sight all have the same feel regardless of the role, and while she is good as that character, I would like to see her play something else.  Wilson has been leaning towards characters of the softer side of the male ego, with puppy dog-like eyes to go with it.

As romcoms go, there are worse ones out there.  However, don't expect anything shockingly different from Marry Me because you won't find it.

Purchase a DVD/Blu-ray/4K UHD physical copy of Marry Me today at Amazon.com

Download Marry Me in Digital HD/4K from the iTunes store.

Listen to the Marry Me soundtrack on Apple Music.

For more information about Marry Me visit the FlickDirect Movie Database. For more reviews by Allison Rose please click here.

Marry Me images are © Universal Pictures. All Rights Reserved.

Read More Reviews For Marry Me